I knew that I wanted to be an artist and it started out as a solution to making work at the beginning. I was a literature student, but I knew very well that I didn’t want to be a novelist. 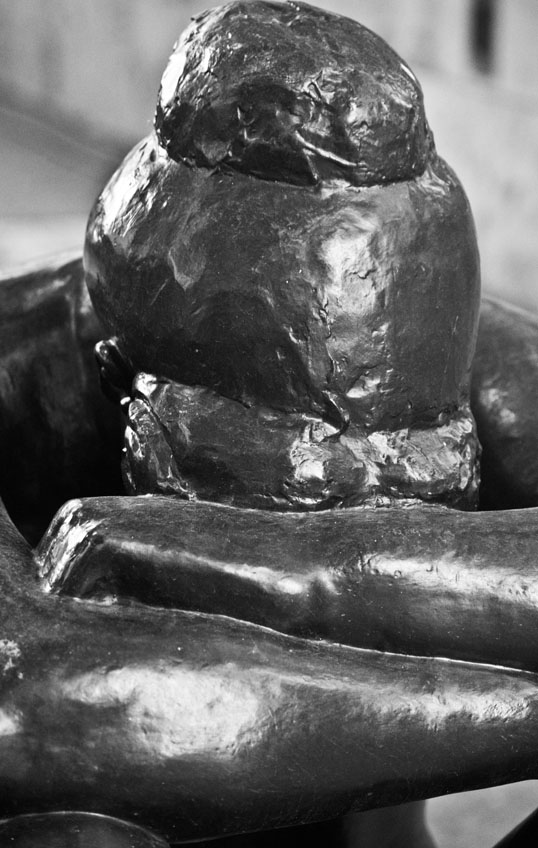 This is the time of year in Dallas where the days are awfully hot – but the nights are still bearable. As you walk the cool, humid air wafts by – but if you cross a patch of concrete you feel the ghost of the day’s heat still radiating upward. I feel guilty interrupting its voyage back into space.

“The past does not influence me; I influence it.”
― Willem de Kooning

Oblique Strategy: Give way to your worst impulse

There is nothing as exhausting as facing your fears – no matter how things turn out. It is so tiring, I’m not sure it’s even worth it.

I have been a huge fan of the Nasher Sculpture Center since it was built. I go there all the time. It is truly one of the most comfortable, wonderful, and amazing public spaces I’ve ever seen. Family friendly , educational, beautiful, and a marvelous host to public gatherings – it was a thoughtful and generous gift from Raymond Nasher to the people of the city.

One of the goals of creating the Dallas Arts District, of which the Nasher is a linchpin, was to attract the high-end buzz of the wealthy clientele that enjoy throwing their millions around in order to wallow in the coolness of timeless art. These folks are hard to pry away from the coasts or the ancient alleyways of Europe but a roadfull of expensive venues and billions of dollars of paintings and sculptures was the lure. And so they come. The first habitat for these rare birds is the shiny new Museum Tower, reaching skyward from an odd oval of property where a Woodall Rogers Freeway ramp arced up and around.

Now I have no problem with that. I’m not a wealthy person and will never be. I have to beg and save just to buy a pen, for example. Most of the art scene I enjoy comes on Free Thursdays and Half-Price weekend and such as that, when the upper crust retreats and allows the hoi polloi to enter and tread their hallowed halls. I depend on the charity or at least the indifference of the wealthy patrons – I exist on their scraps – like a roach under the cabinets I scurry out when they aren’t looking for any crumbs that might be left behind.

So if someone wants to build a tower and charge millions of dollars for a two bedroom apartment – so be it. I applaud their industry, toast their imagination, and do not begrudge them their profits. If they want to call their property The Museum Tower – in order to capitalize on its location right next to the Nasher, fine. If they want to charge an extra million dollars per unit simply so the residents can use the museum garden as their side yard – complete with landscaping and a billion in modern sculpture – great. There is plenty of room and if you don’t mind standing next to me, I don’t mind standing next to you.

But don’t forget what side of the bread you’re putting the butter on. Without the museum there is no Museum Tower. Without the arts, there is no Arts District. Do not roast the goose that lays the golden eggs.

It started out with Tending (blue). The high rise stuck it’s ugly head right up into the viewport of James Turrell’s skyspace sculpture, my favorite spot at the Nasher and the best place to watch the sunset in the Metroplex. But, I’ve written about that before. (go read it)

An oversight, perhaps… pretty damn sloppy, though, if you ask me. You spend that much money on a building, make that much profit, can’t you figure out ahead of time that it’s going to ruin a great work of art? Or do you realize it and simply not say anything until it’s too late. Turrell can fix it, maybe, but when? He’s got other things to do.

And now, it’s happened again. And it’s a lot more serious this time.

They have put the mirrored cladding on the building and it is reflecting so much extra sunlight into the building at the Nasher that they are having to install shades simply to allow the newest sculptures in the room. Sunlight destroys art – but is necessary for art and the Nasher has always been very proud of it’s carefully engineered sunscreen roof. The architect spent a lot of time and effort designing a structure that allowed light for viewing in while blocking the damaging direct rays of the Texas sun. It was a brilliant triumph of design and construction and made for a world-famous light and airy museum that was a strong point of pride for the entire city.

It was a brilliant triumph until a few weeks ago when someone installed a giant mirror reaching five hundred  feet into the sky right next door that shot laser beams of killer sunlight into the Nasher from an entirely unexpected direction.

Nasher to Museum Tower: Watch Your Glass, It’s Frying Us

Nobody ever clicks on links, so here’s the skinny from the Dallas Morning News:

Officials at the Nasher Sculpture Center say that reflective glass recently installed on the exterior of Museum Tower, its new, 42-story neighbor in the Arts District, is compromising its indoor galleries, destroying its outdoor garden and threatening its future as a Dallas landmark.

Now under construction at the corner of Olive Street and Woodall Rodgers Freeway, Museum Tower heralds its proximity to the “tranquil garden” of the Nasher as a prime selling point for its residential units, which cost between $1 million and $5.4 million.

This makes me so angry I could spit. There is a city code that says, “A person shall not conduct a use that has a visible source of illumination that produces glare of direct illumination across a property line of an intensity that creates a nuisance or detracts from the use or enjoyment of the adjacent property.” For years I have had city inspectors quote much more obscure bits of code than this and made places I work do all sorts of crazy stuff.

But then again, the places I have worked have only employed thousands of ordinary people. They haven’t been home to a handful folks that can afford five million dollar apartments. They haven’t been owned by the Dallas Police and Fire Pension System (that’s who bought the tower).

When the Nasher was built, there was an agreement with Raymond Nasher, part of the covenant that helped him agree to build the museum and give his personal collection to the people of Dallas that stated the building next door would be a maximum of 21 stories and have a maximum reflectivity of 15. Now it is 42 stories with a reflectivity of 44.

So here we have a story of corporate greed and hidden scandal. Men like Raymond Nasher are no more.  I notice that mere months after he passed away – a new LA based architect was brought in to fuck things up and the tower doubled in size and reflectivity, causing all these problems -, about the time the City Pension System decided to make its purchase. I guess they knew then the city would not put up a fight. Mary Suhm, the Dallas City Manager says, “It’s not something we have jurisdiction over.” Well, she certainly knows which side of her bread is buttered.

Meanwhile, the art continues to bake and the goose that lays the golden egg is cooked. At least they are using green solar energy to do it.

The condominium tower going up next to the Nasher that is ruining Tending (blue).