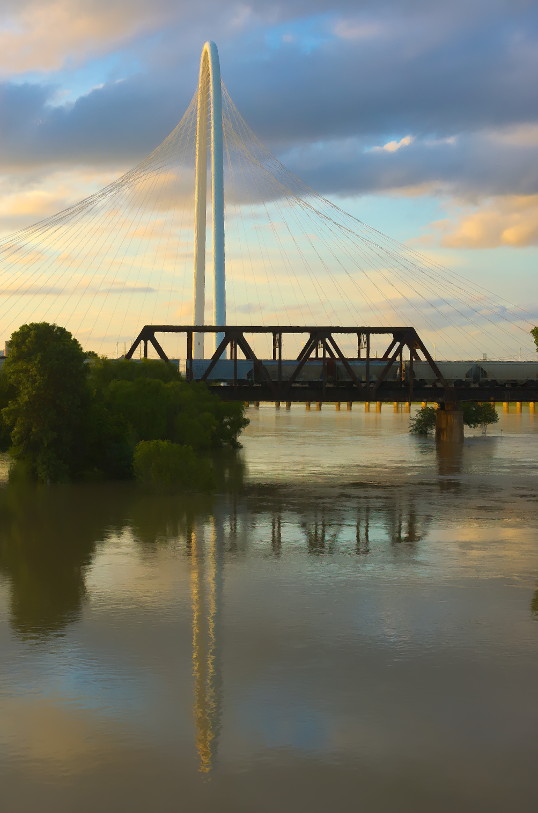 “I am now 33 years old, and it feels like much time has passed and is passing faster and faster every day. Day to day I have to make all sorts of choices about what is good and important and fun, and then I have to live with the forfeiture of all the other options those choices foreclose. And I’m starting to see how as time gains momentum my choices will narrow and their foreclosures multiply exponentially until I arrive at some point on some branch of all life’s sumptuous branching complexity at which I am finally locked in and stuck on one path and time speeds me through stages of stasis and atrophy and decay until I go down for the third time, all struggle for naught, drowned by time. It is dreadful. But since it’s my own choices that’ll lock me in, it seems unavoidable–if I want to be any kind of grownup, I have to make choices and regret foreclosures and try to live with them.”
― David Foster Wallace, A Supposedly Fun Thing I’ll Never Do Again: Essays and Arguments 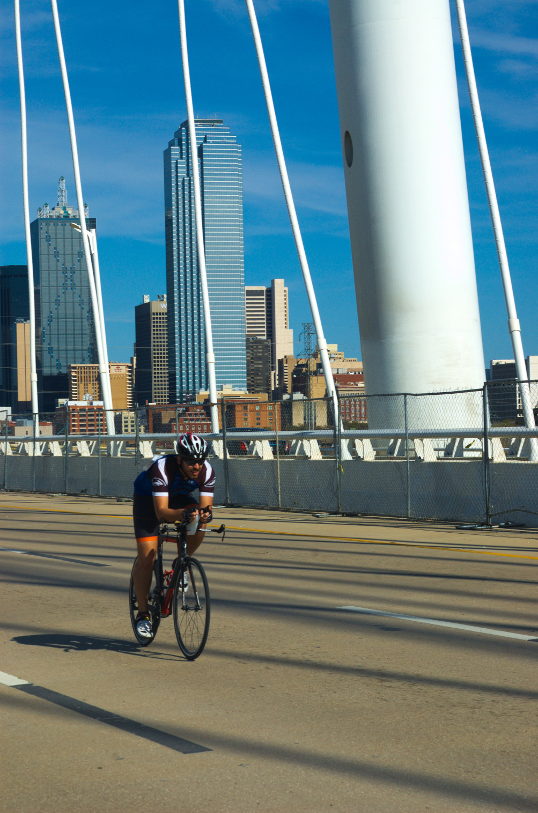 David Foster Wallace wrote the quote above thirteen years before he hung himself. He will never be as old as me. I am closing in on being twice as old as he was when he wrote that quote.

It’s a shame he wasn’t able to stick it out – as time grinds on things get increasingly weird… especially in the sense of “weird” as in different than you expect and stranger than you imagined.

“When the spirits are low, when the day appears dark, when work becomes monotonous, when hope hardly seems worth having, just mount a bicycle and go out for a spin down the road, without thought on anything but the ride you are taking.”
― Arthur Conan Doyle 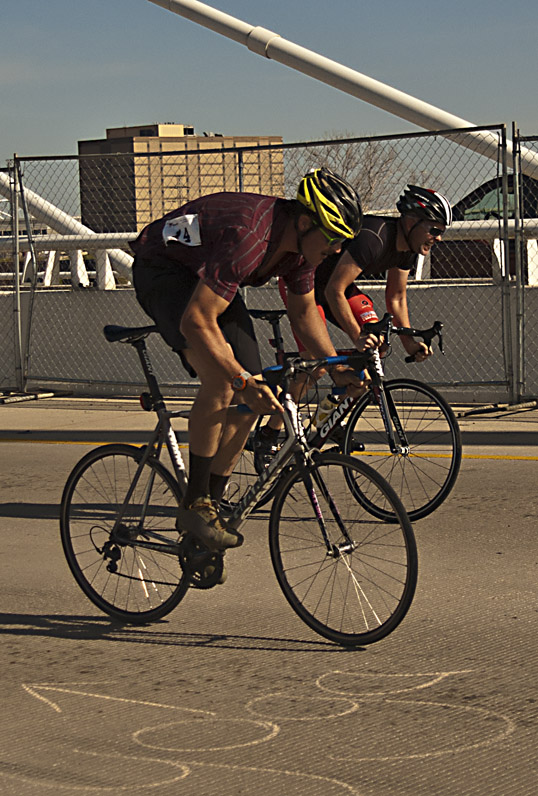 “Whatever question arose, a swarm of these drones, without having finished their buzzing on a previous theme, flew over to the new one and by their hum drowned and obscured the voices of those who were disputing honestly.”
― Leo Tolstoy, War and Peace

The scenes of the swollen Trinity river have been popular sightseeing attractions here for the last few weeks. Luckily, here, the flooding has been more of an inconvenience that the deadly danger that it has posed downstream. The high water is an interesting and strangely beautiful change – and not so morbid of an attraction.

In this modern world, odd occurrences inevitably attract a new breed of gawker – drones. A couple showed up at the Continental Bridge Park while I was down there looking at the water. They had a drone in a case – extracted it, and flew it around the place.
I think it was one of these. It was very capable, flying all over the place, a surprising distance. The pilot must have been very confident – if anything went wrong it would have been lost forever in the rushing floodwaters. 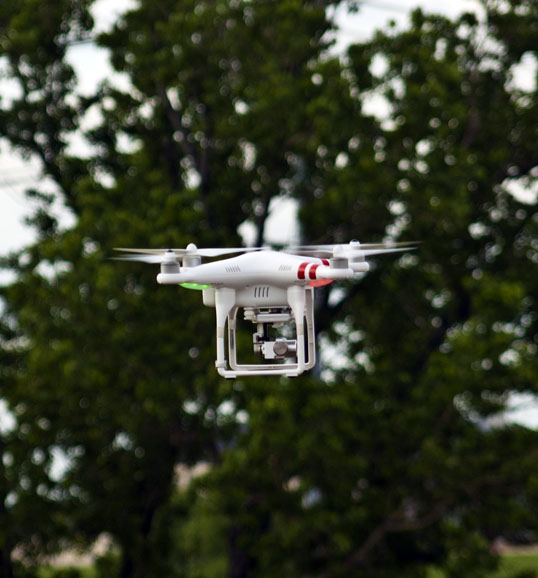 The drone flying off the edge of the Continental Bridge Park, Dallas, Texas 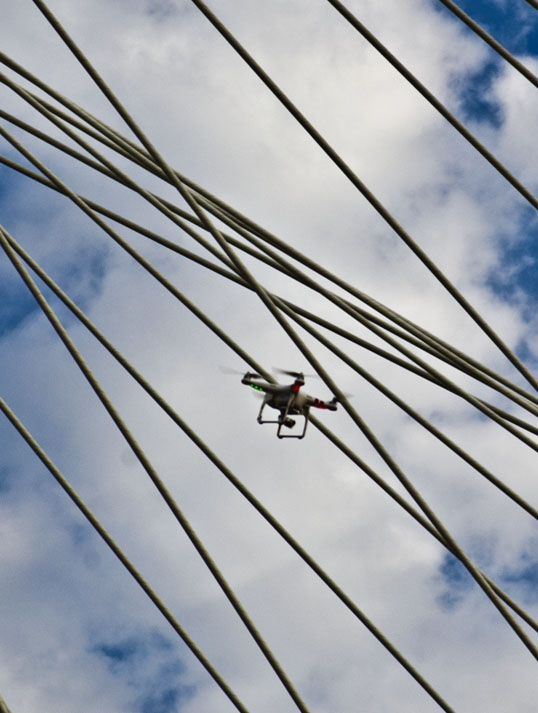 The drone with the cable stays of the Margaret Hunt Hill Bridge in the background. 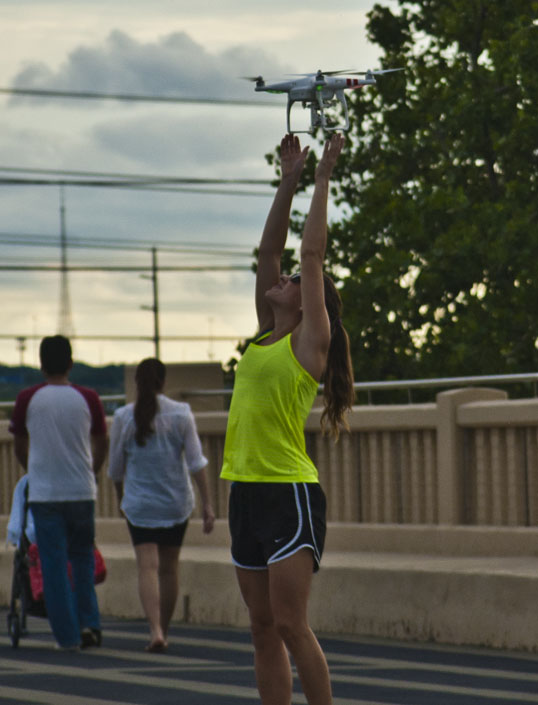 The drone coming in for a landing. She would catch it as it landed.

This wasn’t shot on the same day, but some of the footage is in the same spot.

“Dream tonight of peacock tails,
Diamond fields and spouter whales.
Ills are many, blessings few,
But dreams tonight will shelter you.”
—-Thomas Pynchon 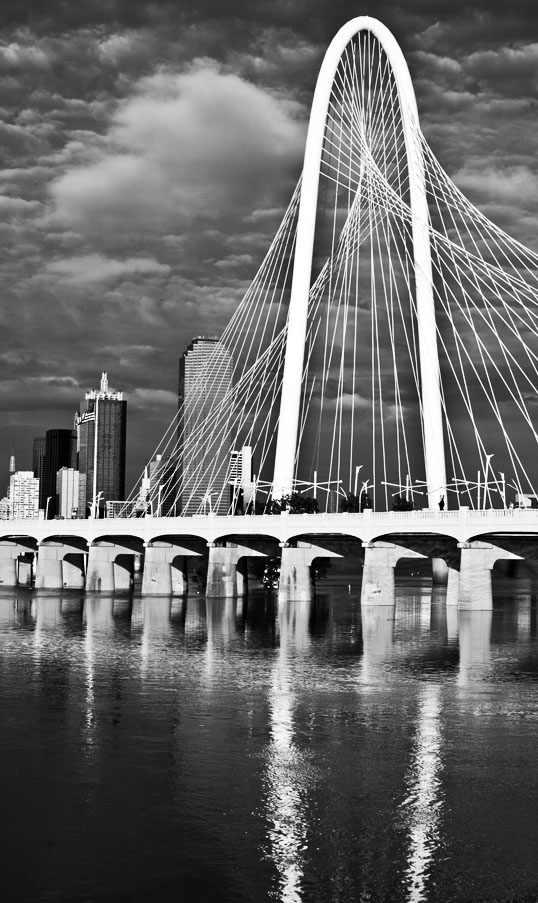 “Because here’s something else that’s weird but true: in the day-to day trenches of adult life, there is actually no such thing as atheism. There is no such thing as not worshipping. Everybody worships. The only choice we get is what to worship. And the compelling reason for maybe choosing some sort of god or spiritual-type thing to worship—be it JC or Allah, be it YHWH or the Wiccan Mother Goddess, or the Four Noble Truths, or some inviolable set of ethical principles—is that pretty much anything else you worship will eat you alive. If you worship money and things, if they are where you tap real meaning in life, then you will never have enough, never feel you have enough. It’s the truth. Worship your body and beauty and sexual allure and you will always feel ugly. And when time and age start showing, you will die a million deaths before they finally grieve you. On one level, we all know this stuff already. It’s been codified as myths, proverbs, clichés, epigrams, parables; the skeleton of every great story. The whole trick is keeping the truth up front in daily consciousness.”
― David Foster Wallace, This Is Water: Some Thoughts, Delivered on a Significant Occasion, about Living a Compassionate Life

Then and now, the view of the Margaret Hunt Hill bridge from the Continental Bridge Park 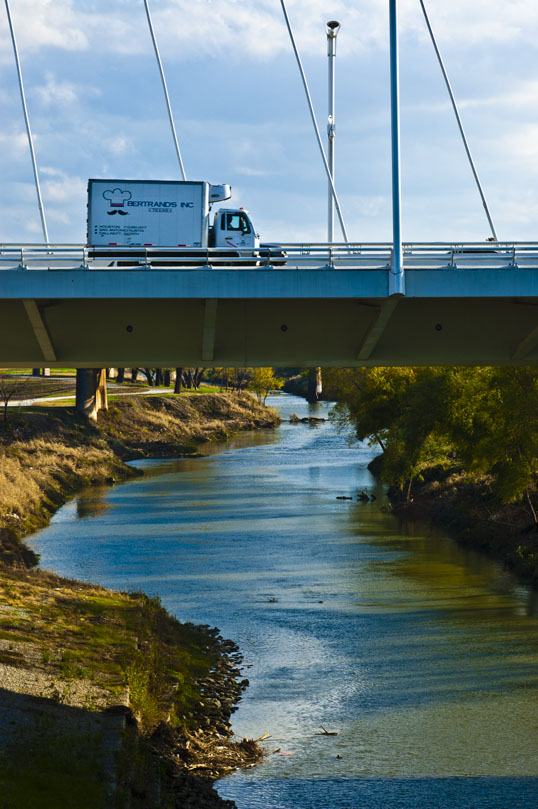 View of the Trinity River and the Margaret Hunt Hill Bridge from the Continental Bridge Park, Dallas, Texas 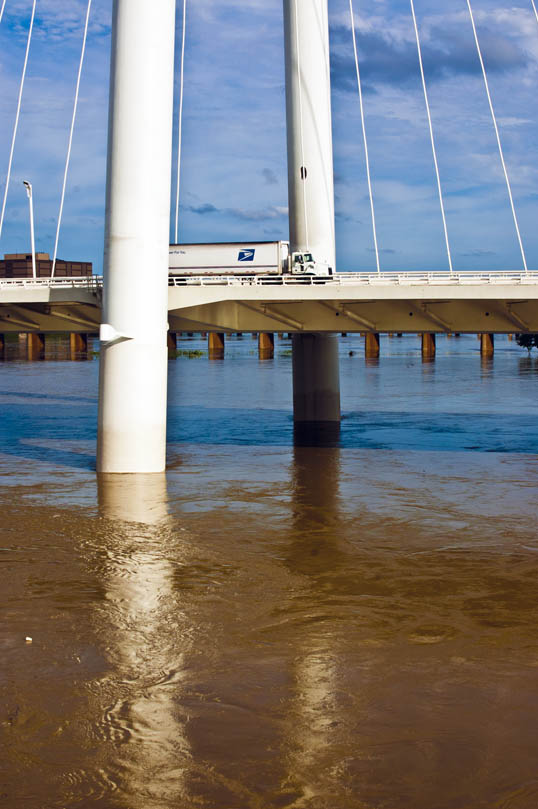 “…the great floodgates of the wonder-world swung open…”
― Herman Melville, Moby-Dick; or, The Whale 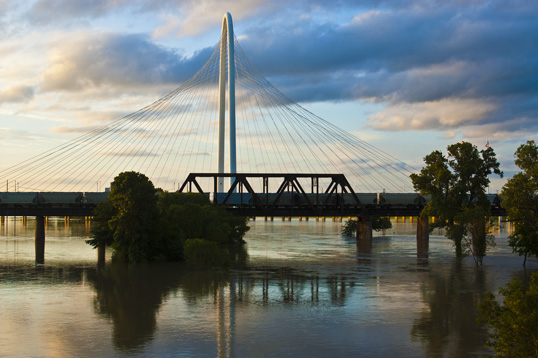 Margaret Hunt Hill Bridge, from the Commerce Street Viaduct
Dallas, Texas
(please click the image for a larger and better version on Flickr)

After the Uptown Cyclovia on Sunday, I rode my bike down to the Trinity River – visiting the flood stage water at several places. It was quite a sight to see. I filled up my digital card with photos – I’ll be putting them up here as I process them.

This photo I took at sunset from the sidewalk along Commerce Street. The sun just peeked out from under the clouds for a few seconds.

When the plans for Santiago Calatrava’s Margaret Hunt Hill bridge were finalized a lot of folks were disappointed that it did not include pedestrian or bicycle lanes. We were promised that a crossing would be provided on the proximate Continental Bridge, which was being converted to a park. There is no other good way to cross the Trinity in that part of town without an internal-combustion engine. The final designs still don’t have the promised through-lanes – but it will open in June, we’ll see how it works out.

At any rate, there is a powerful urge to cross the bridge without a car. It is an impressive, imposing, work of art – and you don’t get a good look from a speeding vehicle. There was a big celebration on opening day, where people were allowed to walk across, but I was out of town and missed it.

Finally, last Saturday, after two years, they had another event planned – the All Out Trinity Festival and I would be able to ride my bike across the bridge. I wanted to get down there right when the ramps opened, but Notting Hill was on TV – so I had to watch the end again.

I packed up my commuter bike and rode down to the Arapaho DART station. As usual, the train was pulling out just as I arrived on the platform, so I had to wait for the next one.

I was later than planned, but the timing worked out as I met a couple of friends riding through Downtown Dallas on the way to the bridge. We fought our way up the steep entry ramps onto the bridge itself.

It was a real thrill to ride on the bridge. Everybody was on the Westbound lanes – across the divider the Eastbound traffic still roared by. The pavement would vibrate like a monstrous guitar string whenever a big truck would rattle past.

There were a lot of events planned and I wasn’t sure what I wanted to do, but a group from Bike Texas gathered together for a ride through West Dallas – that sounded like a plan. 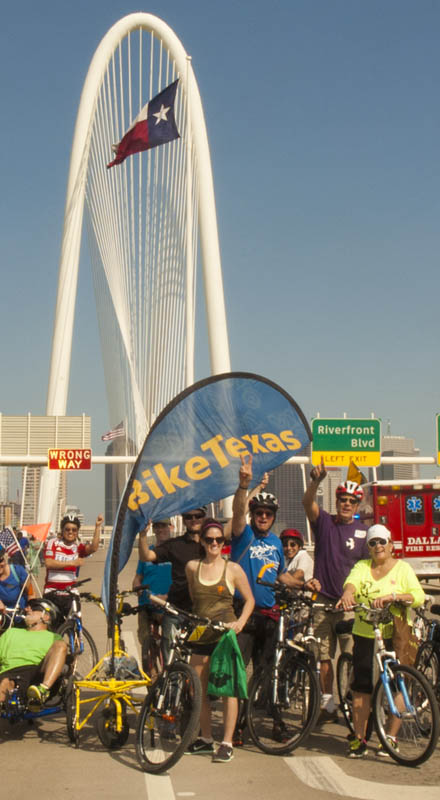 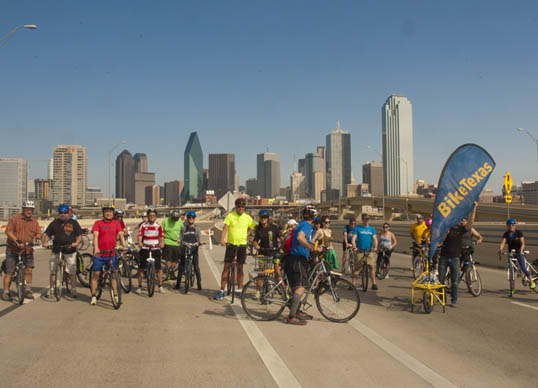 Bike Texas group on the bridge, with the Dallas skyline in the background.
(click for full size version on Flickr) 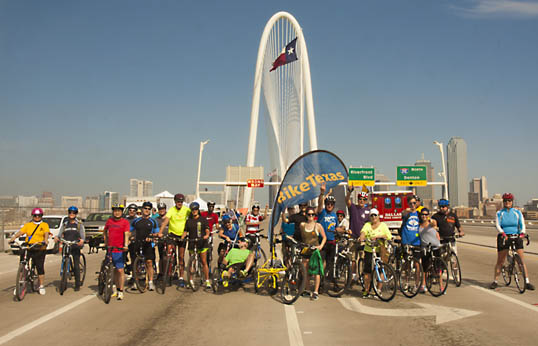 We headed West on Singleton. After a couple miles we passed Fish Trap Lake on the right – where I had ridden a couple months ago to visit the rainbow-colored pier, Dear Sunset, by Ugo Rondinone. The chromatic jetty was part of the Nasher XChange installation – now that the project has ended I wonder how long the pier will remain. It was good to see it still in place. People were out on the pier, so maybe they have even cleaned the bird shit off the wood. 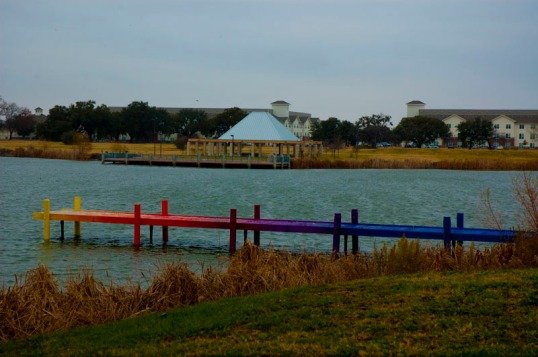 We rode down another mile and turned up to Tipton Park, where there is a new trail and pedestrian bridge. 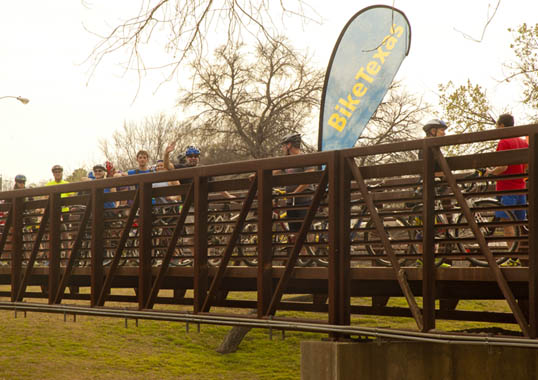 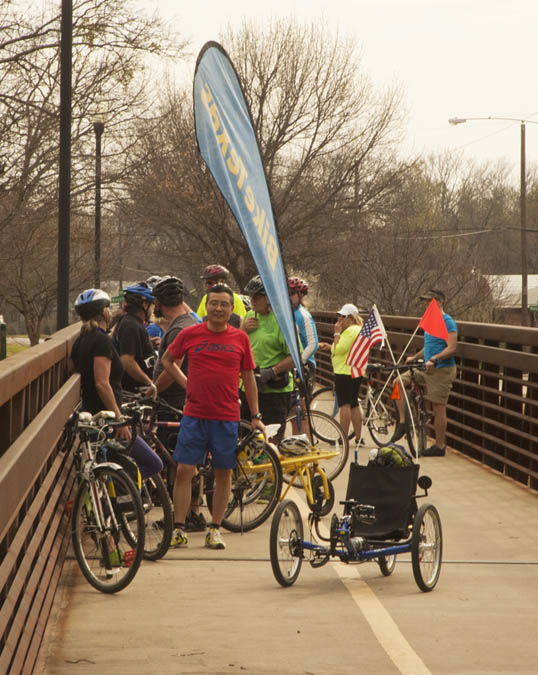 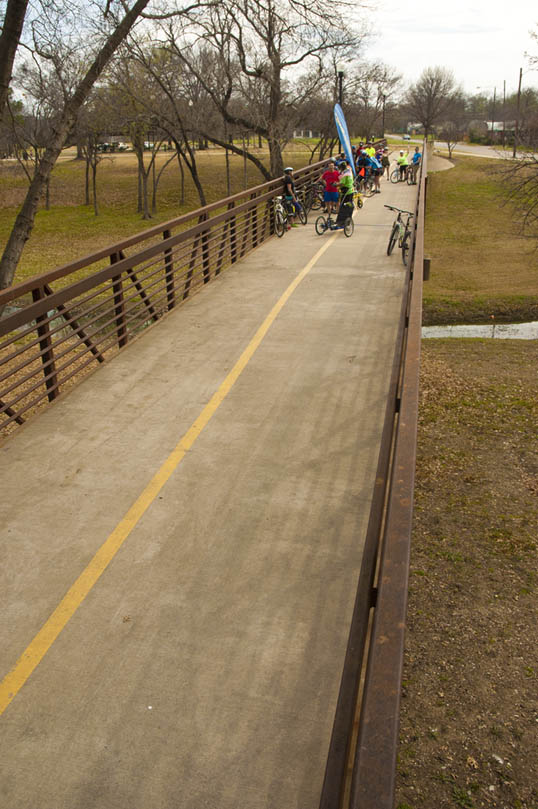 Riding back to the bridge, I was struck by the reaction of the people in the neighborhood. They acted like they had never seen a bicycle before – excited and astounded; some laughed, some clapped, some merely stared.

We arrived back in time for beers at Four Corners Brewery. The only thing better than a fresh local brew is one earned. I had an Oatmeal Stout and their IPA – both excellent. While we were standing around chatting, a thick column of smoke appeared to the south. Fire trucks were dispatched and the black soon turned to gray, then disappeared. Today, I found out that the fire was in a new construction across the street from the Belmont Hotel. Luckily, nobody was hurt.

The entertainment continued as we watched the police arrest a belligerent drunken woman that was stumbling down the street. She fought mightily, but in vain as they strapped her in the back of a cruiser and hauled her to the clink.

It was getting late, the sun had set, and until the Continental Bridge opens, Trinity Groves is a tough place from which to reach a DART station. I decided to ride down into the Trinity River bottoms and go a few miles south to the Corinth station, next to the Santa Fe Trestle Trail. This is the same route I took to visit the Dear Sunset Pier.

I certainly don’t recommend riding alone in the river bottoms at night – but it worked out for me. My lights were adequate to find my way in the pitch wilderness, while the multicolored jeweled towers of Downtown Dallas reached skyward off to the east. The day’s route was a fifteen mile bike ride (plus the four miles from my home to the DART station) with a lot of time spent hanging out and around with a lot of cool people – a good day.

It had been warm, on the edge of hot, a good eighty degrees – but as I rode home from the station I felt the wind switch around to the north and the temperature begin to drop. In twelve hours the temperature would be around twenty degrees and the ground covered in a healthy layer of tiny balls of ice. Springtime in Texas. 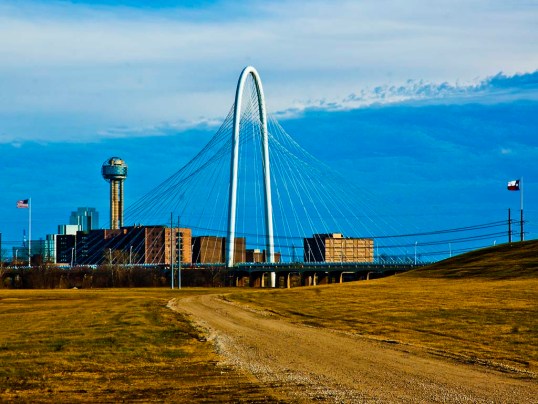