Terrible news from here… a Dallas Icon for the last sixty years, Big Tex, has burned. 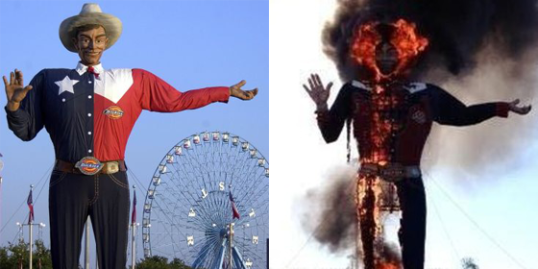 Why are you reading my stupid blog? Why aren’t you reading Cloud Atlas? The movie is about to come out and you have to read the book first.

With the Wachowskis-directed film version of his intricate book ‘Cloud Atlas’ out soon, David Mitchell finds himself ‘happily bewildered.’

Yes, I had one of these… and I thought it was the coolest thing ever. The sounds of the Space Invaders guys as they moved down,  inexorably, faster and faster,  is burned in to my memory forever. For some reason, I enjoyed the crude golf game. And I was really excited when the ultimate twitch-game Defender came out – though it wasn’t as cool as the arcade version – it must have really pushed the console’s capabilities. The thing only had 128 bytes of RAM. That’s bytes, not kilobytes. 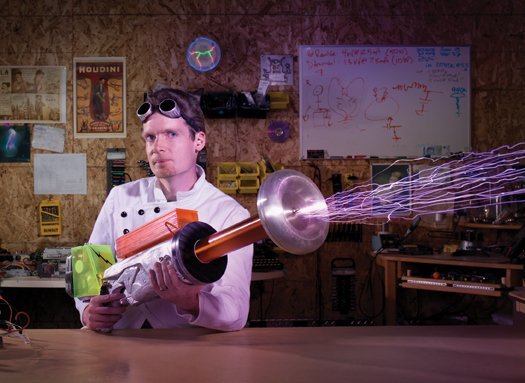 You Built What?!: A Tesla Coil Gun That Produces Foot-Long Sparks

Based on Hateship, Friendship, Courtship, Loveship, Marriage, a book of short stories by Alice Munro, the project centers on a nanny (Wiig) hired to care for a rather wild teenage girl (Steinfeld). Using email, the girl orchestrates a romance between the nanny and the father (Pearce), a recovering addict living in a different town.

I am a huge fan of Alice Munro – I think she’s the best Short Story writer… pretty much ever. Sometimes her stories are too subtle to translate to film or video very well, but still… this has to be pretty good.

12 quotes about reading to inspire writers

1. “A reader lives a thousand lives before he dies. The man who never reads lives only one.”
— George R.R. Martin

3. “If you cannot enjoy reading a book over and over again, there is no use reading it at all.”
— Oscar Wilde

4. “For all I know, writing comes out of a superior devotion to reading.”
— Eudora Welty

5. “These are not books, lumps of lifeless paper, but minds alive on the shelves.”
— Gilbert Highet

6. “We don’t need lists of rights and wrongs, tables of dos and don’ts; we need books, time, and silence. Thou shalt not is soon forgotten, but Once upon a time lasts forever.”
— Philip Pullman

7. “The walls of books around him, dense with the past, formed a kind of insulation against the present world and its disasters.”
— Ross McDonald

9. “A man who does not read good books has no advantage over the man who can’t read them.”
— Mark Twain

11. “Books are the quietest and most constant of friends; they are the most accessible and wisest of counselors, and the most patient of teachers.”
― Charles William Eliot

12. “You think your pain and your heartbreak are unprecedented in the history of the world, but then you read. It was books that taught me that the things that tormented me most were the very things that connected me with all the people who were alive, or who had ever been alive.”
― James Baldwin

Another good article, this one from Vanity Fair, on the ongoing cotroversy between the Museum Tower and the Nasher Sculpture Garden.

A Glare Grows in Dallas: Why a New Condo Tower Has the City’s Art Community Up in Arms

It’s hard to know what the mediation will accomplish, since the developers of the condo tower and their Los Angeles architect, Scott Johnson, have so far done little to accept responsibility. In an exhaustive report on the issue in D, Dallas’s city magazine, Tim Rogers quoted the developers as asking the Nasher what it was prepared to do to help, as if this were a negotiation in which both sides were expected to give an equal amount to reach an amicable compromise. Johnson, for his part, told The New York Times, “I can’t say sitting here now that the Nasher may not need to do something on their end.”

Why, in heaven’s name, should they have to? The Nasher was there first, it didn’t create the problem, and it is suffering from it.

There’s a photo of the glare inside the Nasher’s beautiful, Renzo Piano designed pavillion.

The Next Great Technology Platform: The Bicycle

I don’t want to sound like the old fart that I am, but look at this list of the best 70 albums from the 1970’s (not considered the best decade for music by any shot). There is nothing that comes close to any of these being done today.

The ’70s sometimes get a bad rap: Often these years are remembered as the musical era that brought us disco at its absolute gaudiest. But there was far more going on in the decade than polyester, sequins and cocaine; the 1970s saw the rise of the singer/songwriter, the birth of punk rock, reggae’s infiltration of the mainstream and the long, strange trip led by some of psychedelia’s finest.

In fact, it’s a decade so musically diverse, we had quite a time whittling it down to our top albums. When we polled our staff, interns and writers, over 250 albums received votes, but ultimately these 70 emerged as clear favorites.

14 Photographs That Shatter Your Image of Famous People

Awesome People Hanging Out Together

We all have read and heard enough bad advice to fill the oceans to overflowing. This, on the other hand, may be the best advice I have ever heard… ever.

I really, really, wish someone had told me this when I was sixteen. Ten thousand hours.

The other day, I went down to the Dallas Arts District to watch the first Patio Sessions

Here’s a Vimeo of a bit of the performance….

Why do old books smell

My favorite Internet radio station is Radio Paradise. They play a wide variety of music, all of it good. Every now and then, something comes on that makes me sit up and listen – then find out who and what it was. This was one of those times.

This has (as of when I’m writing this) over one hundred fifty million hits. I suppose you have already seen it. On the odd chance that you haven’t – here it is anyway. It deserves the hits.

This is sort of long, but watch the whole thing, it’s worth it. Nine-year-old’s cardboard arcade launches college fund

All writers shares a common epiphany on the writing path. I call it Staring Into The Abyss. This experience happens when our writing has strengthened to the point where blissful ignorance rubs away and we begin to realize just how much we don’t know.

It’s a dark moment, a bleak moment. We feel shock. Frustration. Despair. Some stop right there on the path, their writing spirits broken. Others take a micro-step forward, progressing toward the most important stages leading to growth: acceptance and determination.

Once we come to terms with what we don’t know, we can set out to learn. Taking on the attitude of a Learner is what separates an amateur from a PRO.

How to Make Sriracha Powder

The Best Taquerias in Dallas

As I scoured the depths of YouTube for bits of amusement to stick into my one per week “lazy entry” that I call, “what I learned this week” I kept stumbling across these little jewels of odd humor done by the folks at 5 Second Films. These were only eight seconds long (the three second title sequence doesn’t count) and would cram more story, characterization, and humor into those tiny slices of time than any SNL sketch.

As I watched and collected the ones I liked, I noticed that the same actress kept showing up in my favorites. She was always referred to as “Kelsey” and it wasn’t hard to figure out that she was Kelsey Gunn.

So I have become a fan. Why? I don’t know – she is funny, of course, and has that nerd-girl pretty quality. So now I’m subscribed to her on Facebook and watch her Vimeo Channel and  follow her on Twitter and watch her 5 Second Films, and See what she’s up to on IMDB (She’s Actually Kelsey Gunn (II))

Will Kelsey Gunn ever become famous and win Oscars and stuff? Is Batman a Transvestite? Who knows?

Oh, here she is at 2:16 in  “Meter Maids” – I’m not too sure about her Southern Redneck accent (but then again, I am a cono-sewer of the type) but the “Sexy Dance” is up there.

5 Second Films: Wasting Your Time, But Not as Much as This Article

The Joy of 5 Second Films