Tulane was playing Memphis in its homecoming game at the newly-named Mercedes Benz Superdome (complete with the world’s largest hood ornament hanging from the roof) in downtown New Orleans. The university provided a shuttle bus but we decided to drive downtown, find a parking spot and then walk over to the pre-game tailgate party. I used my phone to carefully plot a route from campus to the most promising lots but New Orleans traffic is unforgiving and a mistake in lane placement forced me onto a ramp that wound around until it set us on Interstate 10 going towards Baton Rouge. Before I could get to an exit we were farther away than when we started and in a completely unknown neighborhood.

I have no idea where we went but we eventually ended up downtown winding around one-way streets with no turns allowed, still confused and lost. Finally, we spotted a lot and after a couple near-misses managed to park.

I would have bet we were a mile from the stadium, but it was only a couple of blocks.

Candy, Lee, and Drew walking to the Superdome for Tulane's homecoming game.

Lee at the game.

The Superdome is an amazing building – it is so unlike anything else it appears surreal when you first set eyes on it. There is no reference point so you can’t really understand its massive size… or even figure out how far away it is. It is such a familiar sight you instantly recognize the shape and color, but somehow it always looks like it is something on television and could not really exist in the real world.

They have spruced up the exterior and redone the inside and it is very nice. It almost looks modern. One thing that I did notice, however, is that a lot of the interior ceiling panels that were blown off when Katrina struck are still missing. I don’t know it they were too hard to fix, too expensive, or if they were left as a sort of memorial harmless hard-to-see damage.

You can’t sit inside the Superdome without thinking about Katrina. You look at the football field and imagine it crowded with terrified refugees. You look up and imagine the wind whipping and tearing holes in the roof; imagine not knowing if it is going to hold or not.

A fun innocent college homecoming football game is haunted by the ghosts of Katrina. It will probably always be that way. 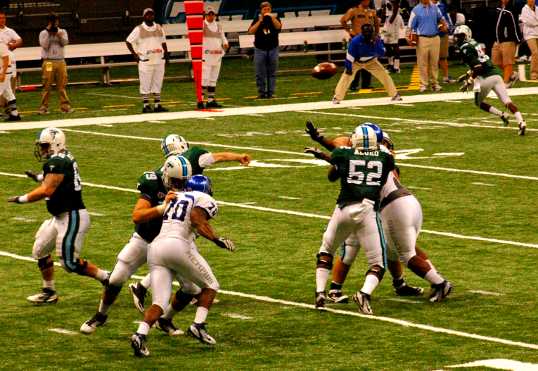 Eventually, the game was out of hand.

The sun was setting when we left the game. The skin of the building glows gorgeous in the crepuscular light.