“I must be a mermaid, Rango. I have no fear of depths and a great fear of shallow living.”
― Anais Nin 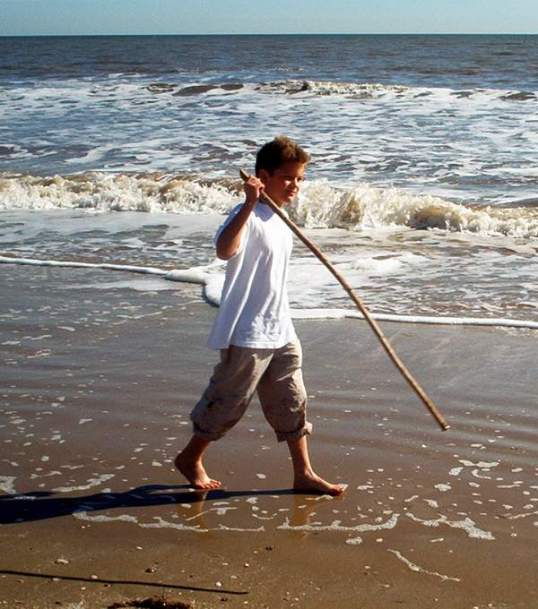 Lee walking in the surf at Crystal Beach. I checked my old blog entries – this was December 29, 2002. Fifteen years ago, almost to the day.

Here’s another one for today (#81) Getting closer! What do you think? Any comments, criticism, insults, ideas, prompts, abuse … anything is welcome. Feel free to comment or contact me.

Andrew was a senior in high school. He had a brother, Sam, who was a freshman. Andrew didn’t really like going places with his family, but he loved hanging out at the sea. So when he parents insisted that he go to the beach with the three of them and Sam’s friend Wilbur he hemmed and hawed and complained but agreed to go. Actually, he was looking forward to it, but knew he couldn’t appear too eager or it would betray his brand.

“Sam is bringing Wilbur for the day, don’t you have a girlfriend you could invite?” asked his mother. Andrew flashed his best combination face of exasperation, embarrassment, and fury before he turned, huffed, and stomped off. “If I had a girlfriend I wouldn’t have to go to the beach with my family,” he said to himself once he reached the privacy of his room.

The drive was two hours and getting all those people into the MiniVan and on the road was like herding cats. Andrew crammed himself into the back seat with his eyes closed hoping he could stand it until they were there and all this noise stopped. A split second before it became too much to bear they pulled into the parking lot and the whole crew piled out and ran for the sand.

It was a warm day and the ocean was like bathwater. Andrew swam a little and body surfed the waves a bit. His favorite thing was simply to walk the beach in the shallow water between the surf and the dry sand. He was of a curious nature and loved to look at the water, sand, and the creatures that lived in the tidal zone. Every time he came, he wondered at the smell of the sea – salt with a note of rotting fish. The strong breeze from offshore threw his hair around and the sun dried the wet sand on his ankles as he walked. Above all, he loved the rumble and crash of the surf – though it was partially ruined by the constant yelling and screeching of his little brother and Wilbur as they scampered around, causing as much trouble as they could.

The sun was beginning to settle towards the horizon when Sam ran up to Andrew and aroused him from his reverie. Sam was clutching a plastic bucket and toy shovel. Wilbur was grinning a few feet behind.

“Andrew! Look!” his brother said, holding out the bucket.

Andrew peered in and saw a single smooth brown clam.

Sam handed the bucket to Wilbur.

“Wilbur and I dug it up! We’ve figured out how to find where the clams are buried.”

His little brother began walking Andrew along the sand, looking carefully at the strip where the waves ebbed and flowed and the water was a fraction of an inch deep.

“Look down carefully. You just look for a place where these little bubbles are coming up…. There! Right there!”

Sam handed Andrew the plastic shovel and he poked at the wet sand. Immediately another clam popped up, only an inch below the surface.

“I told you,” Sam said. “Wilbur come here.” Sam flipped the clam into the bucket with the one they had found earlier. “Let’s find some more.”

They continued to walk along the beach and after a bit Sam would point and Andrew would dig up another clam. They would hand them to Wilbur who would drop them into the bucket. Andrew was confused because he could not figure out how Sam was finding the clams.

“What are you seeing that I can’t?”

“It hard to explain, it’s more like a feeling.”

Andrew couldn’t argue though, because every time he’d dig, he’d find a clam. He began to get more and more excited. Visions of filling the bucket and having a clambake began to grow and fill his imagination. He didn’t notice the sky going golden as the sun crept down.

“Hey, guys. Finish up, it’s time to go,” said his father. Andrew hadn’t noticed his parents hanging around next to them.

“No! Dad! We can’t go! Look at all the clams!” Andrew gestured toward the bucket in Wilbur’s hand. “We’re going to have a clambake!” He could barely contain his excitement.

“Just a couple more minutes, then we have to go,” said his father.

Andrew was confused at his father’s lake of enthusiasm for the clambake. He chalked it up to age and continued to walk along with Sam, stopping every few feet to dig up another clam. Wilbur kept putting them in the bucket.

“Wow, I hope we have enough to cook up,” said Andrew. “Hey Wilbur, let me look at the bucket. It must be full now.”

Wilbur started to twist away but Andrew was excited and quick and grabbed the bucket. Barely able to contain his excitement he pulled it close and looked down to see the pile of clams they had collected.

Andrew was shocked to see in the bucket only one clam rattling around alone in the bottom.

Confused, he looked up to see his parents, impatient and aggravated and his brother and Wilbur down in the sand rolling around laughing so hard they looked like they were going to get sick.

Andrew suddenly realized what had been going on. There was only one clam. Sam must have simply stumbled across it somewhere. Wilbur was walking ahead of them while they were looking down and he was re-burying the thing, over and over. Sam would point to the spot Wilbur had buried it and they would dig the same clam up, again and again.

It took the younger kids a long time to stop laughing and then they all walked back to the MiniVan. Andrew, of course, said nothing and heard nothing. It was especially humiliating to realize his parents could see the whole thing, hear his excitement, and let it go on.

The drive home was the longest trip in Andrew’s life. He was so ashamed and also disappointed – he had been really looking forward to a clambake.

The only thing that made him feel a little better is the thought that at least he didn’t have a girlfriend. If she had been along… and seen what happened. He wasn’t sure he could go on living.