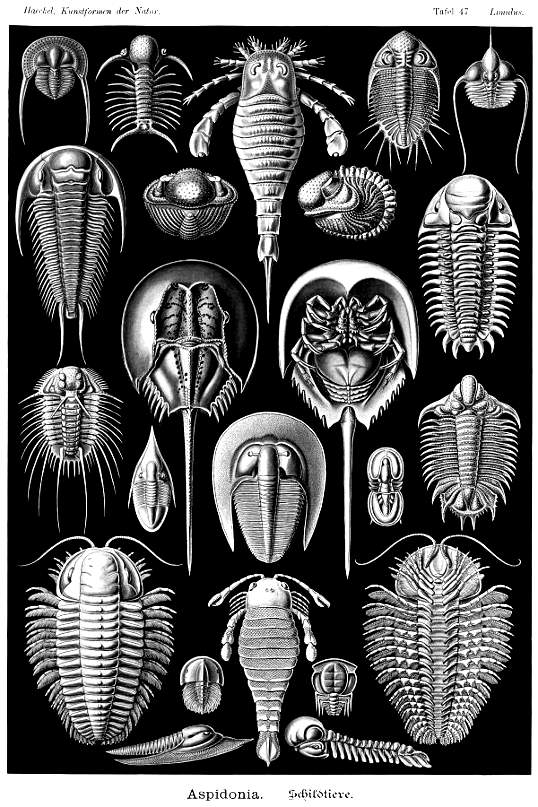 Here’s another one for today (#32). What do you think? Any comments, criticism, insults, ideas, prompts, abuse … anything is welcome. Feel free to comment or contact me.

One day, decades ago, little Charlie Cook found a fossil shark’s tooth along a rocky road on a family vacation trip. He was mesmerized. He started to collect every book on fossils he could get his hands on – starting with the “Golden Nature Guide” that had 481 Illustrations in color. He devoured these books because that was how he was.

One day he was looking out the window while his parents drove into the country for an antique sale. His eyes grew wide as the car moved through a high road cut. Charlie recognized layers of limestone and shale… and what they would have to contain. He could almost feel the millennia piled up right there.

“Mom? Dad?” he said, “If I can get Reggie and Sherwood to come with me would you drive us out to this road cut and pick us up at the end of the day?”

“To look for fossils.”

“Are you sure that’s safe?”

Charlie’s friends did not care about fossils but they were up to any kind of adventure. He misled his parents about what they would be doing; assuring that they would only be looking along the road. Once the car was gone, they started climbing all over the cliff – nimbly picking their way up and over the layers. Charlie had a real rock hammer his uncle gave him for Christmas and he was elated to be using it in the field.

It was one of the best days of Charlie’s life. They climbed, dug, and whacked at the stone with the pick end of the hammer. Their moms had even packed lunches: bologna, mayonnaise, and sheets of fake cheese on white bread with bags of chips and juice boxes.

And they found fossils. Mostly the corrugated cylinders or individual disks of crinoids. These were cool and all over the place. They even found a couple wedge shaped brachiopods. Nothing rare or amazing – but a good haul for a kid. Charlie scrubbed the rocks and lined them up on a shelf in his room – prized possessions.

Over the years, as he grew, Charlie would go looking for fossils. He found a few, more than most, but there was one prey he never caught – a trilobite. He always wanted one – but never found one. It was no big deal. There are remote places where you can go – a flight, a four-wheel-drive-rental, long lonely drive, isolated camping – and you can pay to dig for trilobites. But it never worked out – he never went.

Finally, he broke down in a rock shop and bought a little trilobite in a plastic box. He had one. But he hadn’t found it himself and it never went onto the prized shelf.

Now, twenty years on, Chas Cook was a geologist who, like every other geologist at that time, worked for a hydrocarbon exploration company. He was stuck in a low walled cubicle high in the air among the mirrored glass crystal canyons downtown. Instead of traipsing around in the wild, digging up and looking at the remnants of animals that lived millions of years ago, he was stuck at a desk reviewing reports that the lucky bastards out in the field sent in.

The day was getting long and boring when Chas noticed a commotion along the windows next to the maze of cubicles. There was a buzz with everyone pointing at the street. He walked over to see a huge fountain streaming high in the roadway below. A water main had burst deep under the pavement. Of course, the whole office rushed to the elevators and outside to see the show.

Not long after they clustered together on the sidewalk, the city began turning the pressure off and the giant geyser began to dissipate. All that remained was a decent flow that gurgled up from deep below but never made it into the air.

Everyone else let out a sigh of disappointment and headed back up to the office but Chas noticed that the water was pulling a lot of coarse gravel through the broken asphalt from deep below and spreading it out across the street.

“Urban geology!” he shouted. “I’ll bet there are fossils in there.”

Chas waded out into the water, bent over and began picking through the gravel. It was a cornucopia of ancient critters – Chas supposed that the street was over an ancient rocky beach and the water from the leak was lifting all that good stuff up and delivering it to him.

There were (at least pieces of):

… Then, there it was… right on the street perched and cushioned on a little bed of sand, a small but complete and perfectly preserved Trilobite.

Chas snatched it up and held it high and proud. He looked around at the massive buildings, the traffic, the commuter train going by, the crowds of onlookers, the colossal city itself perched above the  unknown remains of millions of years. He breathed in the exhaust, fumes and smoke and listened to the dense urban cacophony of horns, rumblings and shouts. What an unexpected place for an ancient extinct Trilobite to end up. But it had.

And he had found it.

2 responses to “Short Story Of the Day (flash fiction), Trilobite by Bill Chance”