“People will come Ray. The one constant through all the years, Ray, has been baseball. America has rolled by like an army of steamrollers. It has been erased like a blackboard, rebuilt and erased again. But baseball has marked the time. This field, this game: it’s a part of our past, Ray. It reminds us of all that once was good and that could be again. Oh…people will come Ray. People will most definitely come.”
― James Earl Jones, Field of Dreams 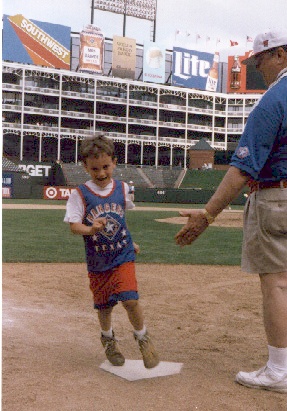 Nick crossing home plate at Rangers Ballpark in Arlington. They let the kids run the bases after an afternoon game – we had to wait for hours for his turn. This would have been right after the Ballpark opened, probably 1995. It’s hard to believe he’s almost thirty years old now. The ballpark closed this year.

Here’s another one for today (#34). What do you think? Any comments, criticism, insults, ideas, prompts, abuse … anything is welcome. Feel free to comment or contact me.

Tyrone Gibblet hated the little town. He and his mother were there staying with her sister, helping out while she had surgery. They wouldn’t even tell him what she was getting cut on – it was too private.

He was missing summer baseball camp and it was killing him. He was the ace pitcher on his school team. He knew college scouts would be watching. He needed every edge he could get and didn’t want to be set back while stuck in this backwater town.

“A rest will be good for you,” his mother had said, “I’ve cleared it with your coach, he even agrees with me.”

Thinking of that made his blood boil. He was seventeen years old and did not need his mother living his life. Coach would tease him.

Today he was aimlessly ambling down the sidewalk. Everyone there always nodded and said a quick “hello” as they passed each other, their noggins bouncing like bobble heads on a bumpy road. They all knew each other and everyone knew that he didn’t belong there. Their eyes would fall on him and their mouths would screw into odd shapes.

It was driving him crazy.

Then he saw Audrey up ahead on the sidewalk, and his heart skipped a beat. Tyrone had been introduced to her at the church youth picnic last Saturday. He had barely been able to mumble to her, his brain suddenly scrambled by the cataract of blond curls framing oversized sunglasses.

He was trying to decide what to do when she turned and went into a store. His chest was heaving and he felt dizzy. He walked past and turned around three times before he worked up the courage to enter the store.

The space was long, wide, and low, and took up the whole ground floor of a decrepit brick building along Main Street. The ugly painted steel and particleboard shelves held a wild variety of items, from dusty cookware to piles of out-of-style clothes – everything sporting hand-written price tags in bright colors. The long tubes of flickering florescent lights sucked the life out of everything.

A popcorn stand near the entrance filled the air with oily rancid fumes. He looked at the people marching up and down the aisles and couldn’t believe they could stand the awful smell. He guessed they were just used to it – or didn’t care – or didn’t have a choice.

Tyrone had reached the end of one aisle and as he turned the corner to walk back the other way he jumped back, hiding behind a rack of shelves when he saw Audrey. She was studying some towels with her mother. He was afraid to talk to her with her mom standing there – that was for sure.

Tyrone decided to move over into the sporting goods and keep a lookout for Audrey.

His eyes moved over a bin of baseballs. They were cheap imports – the kind his team bought by the bucket for batting practice. He picked one up and turned it over in his hand. Tyrone had his first baseball before he could walk. He had spent thousands of hours gripping one – it felt like it belonged there.

Holding the ball behind his back, like he was waiting for the next batter, turning the sphere in his hands, comforted him. He pulled air deep into his lungs. He closed his eyes and felt at home.

His reverie was cut short by a loud clattering, followed by a sharp scream. He moved over an aisle and saw Audrey collapsed on the floor and a man shaking her mother with one hand grabbing the front of her dress.

The man was screaming a constant roaring rush of obscenity. Aubrey’s mother had given up and was limply letting him shove her around, simply sobbing, “Dan, Dan, please just let us go”

He looked a week unshaven and longer unwashed, wearing a pair of grease-stained denim overalls above a torn undershirt. One strap had come loose and the front flap was flopping around as he jerked at Audrey’s mother.

Without thinking, Tyrone walked forward toward Audrey and she looked up from the dirty linoleum into his eyes. A horrible scream came from her mother and Audrey snapped her head around in panic.

Everything was happening too fast.

He was twenty feet away when the smell washed over him. Old alcohol, mixed with stale sweat and evil filth – an acrid cloud that woke old memories, bad baggage he was always trying to forget.

Then the man’s right arm came up high and, to his horror, Tyrone saw that he had a huge ugly knife. It was a machete, heavy, with a big brush hook – evil and deadly. The man was waving it in the air, shaking, and holding Audrey’s mother tight with his other arm. Audrey saw the weapon and let out a long, horrible whimper.

Tyrone became calm and clear. He spun the baseball with his fingers and brought his feet together, sideways to the terrible scene. He rotated the ball until he could feel the long horseshoe bend of the seam under the tips of his first two fingers and the other curve nestled against the side of his thumb.

A four-seam fastball. That was his money pitch. He could throw it at over ninety miles per hour to any spot he wanted. It would shoot past those poor freckle-faced high school kids before they even had a good look at it. He would sneer as it pounded the catcher’s mitt – with a bang and a puff of dust – long before their bats could even move off their shoulders.

As the man with the machete turned his head Tyrone began to raise his front leg, throwing from the stretch like there was a fast runner on first. By the time the man’s eyes focused on Tyrone his knee was already lifted up to eye level.

He felt his foot grip the grimy floor and knew he could drive it hard. His entire world was reduced to a tiny rectangle between the man’s eyes. He could see the ragged hairs and rough pores.

Like he had a hundred thousand times before Tyrone let his leg fall down, tilting his body forward. His arm contorted at an inhuman angle, bent like a steel spring, curving like a whip – and as his back leg pushed with all his strength he let the ball fly using every practiced muscle.

In a baseball game, the mound is sixty feet and six inches from home plate. It takes about a half second for a fastball to travel that distance. Only the fastest well-trained eyes can even see that.

The man was only twenty feet away. The ball took less than a quarter of a second to cover that distance. Even though it was hurtling directly toward his face he never saw it coming.

The ball struck him with a terrifically loud and sickening thud. A spray of blood, brain, and bone shot out in a horrific fountain. The ball thumped to the floor, followed by the machete clattering on the linoleum. For a second, the man stood stock still, his head bent back at a sickening angle – then he began to fold.

The man fell in a limp heap. His hand released Audrey’s mother, who tumbled away in a screech.

As his thoughts cleared, Tyrone realized that he had entered into a new chapter of his life, one he had never expected. Everything that had, until now, seemed so important began to fade in his memory. From now on, as long as he lived, he would be a man who had killed someone. He realized that this was an exclusive club, one that nobody really sets out to join.

He had killed a stranger at close range, with only his hands and a baseball. It wasn’t like he had been firing a gun across a war-torn patch or pushed a bomb release. He had been looking this man right in the eye and had been close enough to smell his fetid sweat.

The weapon that he used was the one thing that he was most familiar with, a toy from a child’s game. A toy that in skilled hands became something else. It became life and death.

His hand began to itch, suddenly. He realized that he didn’t have a baseball any more. Tyrone knew then that he would never feel whole again, unless he was turning that ball around behind his back, feeling for the four-seam.