“Art washes away from the soul the dust of everyday life.” 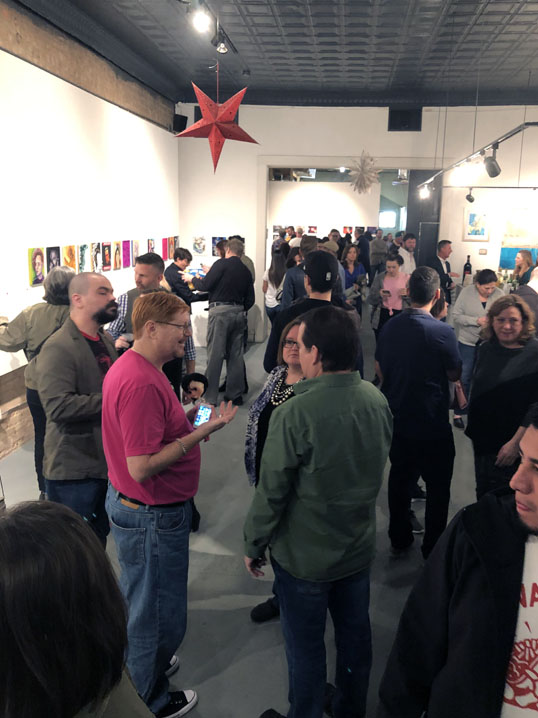 The crowd at Kettle Arts “For the Love of Kettle” event

The first time I went to Kettle Art Gallery‘s For the Love of Kettle was in 2014. I know it was because I wrote about it here. This is the sixth year I’ve gone, and I look forward to it every year.

Kettle Art is a gallery in Deep Ellum and is known for its unflagging support of local artists. Every February those artists get a shot at returning the favor. The gallery distributes about two hundred identical nine by twelve inch boards to be converted into works of art. They go on sale at seven PM for fifty dollars apiece, and all of the proceeds go toward the gallery (they return the favor a week later with their For the Love of Artists event). The thing is that there are two hundred or so pieces, but three hundred or so folks show up and many buy several works – some up to ten. That’s why they call it a “competitive shopping event.” They open the doors at seven PM sharp and everyone rushes in.

The paintings are numbered and you take the numbers up front and reserve your painting – if nobody else has gotten to it first. Then you pay, then you pick up.

I don’t have a lot of money, but I can come up with fifty dollars. I used to go an hour early so I could get a spot near the front of the line… and get the painting I wanted. I don’t do that any more – now I go an hour and a half early.

The event is at seven and I wanted to get there at five thirty. It takes an hour or so to get downtown on the train, especially since I have to change from the Red line to the Green to get from downtown to Deep Ellum… plus fifteen minutes to get to the train station – I left home right at four fifteen.

Everything went as planned until I got off the train at the Arts District station downtown. On the weekends the trains don’t run very often and the next Green train wouldn’t be there for a half hour. That would not do. My eyes fell on the electric scooters lined up on the sidewalk. I’ve ridden the scooters before (read about an adventure here) so out came my phone and I unlocked one and five minutes and a buck ninety later I was in Deep Ellum. The only problem was that the road I took was rough and the little wheels on the scooter didn’t help that – but I made it in one piece.

Arriving right on time, ninety minutes early, I was fourth in line. The fun thing is that the same people go early every year, so we had a lot to talk about. Mostly, though, we talked about strategy. You see, the line starts immediately at the reserve table, so the question is whether to rush to the table or walk around and look for the painting you really want – at the risk of someone else getting it.

I always stress out about this, stress too much. One year I went on a bike ride and arrived dehydrated and the stress got to me and I wrote down the wrong number – getting a random painting. It was OK – but not the style I wanted… and the artist saw me with it and said, “I can’t believe it sold so fast.” I lied and said, “Oh I wanted it right from the start!”

This year I looked in the window and could clearly see the first paintings with their numbers. I realized that I really liked four of the first five and would be happy with any of those. Talking to the people in line (we all traded our favorites and agreed not to buy each others) they suggested a great strategy. It involved buying two paintings. I would rush to the table and buy a painting I like right away (Painting #1, as a matter of fact) and then I had one that I liked locked up. After that,  I could leisurely walk around, writing down any others that looked good and buy one of those later. Many would be bought, but some should still be left.

That was the ticket. I’d spend an extra fifty dollars, but get two paintings… and have fun, with no pressure, because I was guaranteed of at least one that I liked and would probably get two.

The line behind me stretched most of the way around the block… and then the door flew open and I rushed in, went right to the table (I was third, the people in line before me were there first) and bought painting #1.

It was a painting by Brad Allbright of Dallas’ Travelling Man riding a scooter. Since I had ridden a scooter to the event, I thought that was an omen.

Some of the art at Kettle Arts “For the Love of Kettle” event. I really like the bomber/umbrella painting in the foreground and the robot drummer a little bit back. 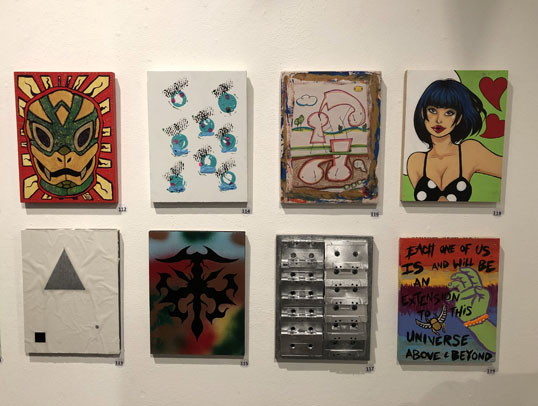 Some of the art at Kettle Arts “For the Love of Kettle” event. These were in the back room – those seemed to sell a bit more slowly.

In this photo you can see a painting by Richard Ross – I bought one of his in 2016.

Happy with my choice, I wandered around looking at all the art, writing down the numbers of about two dozen works that I particularly liked. Then I joined the long line waiting for a painting. When I reached the front, I was surprised at how man numbers I had written down were still available. I chose a colorful Day of the Dead skull that I knew Candy would like.

Day of the Dead skull by David Pech.

It was painted by David Pech. Candy really liked it.

Once I had both my paintings picked up it was getting late, though there were still people arriving and buying art. Looking at the board where they crossed numbers off when the paintings were taken I noticed that there were still a couple that I had written down as particularly liking that were not purchased yet. So I guess I don’t really need to go ninety minutes early next year. But I think I will. I’ll definitely save up a hundred and buy two paintings. That strategy is the ticket.

I should have brought a backpack because I couldn’t ride a scooter with two paintings in my hands. So I had to wait thirty minutes for the next train.

3 responses to “A Competitive Shopping Event”