We’re just a joke they sometimes crack, they’ll get away with anything
The government is holding back, they won’t say a word
Now is that a light in sky or just a spark in my heart?
—-Graham Parker, Waiting for the UFOs 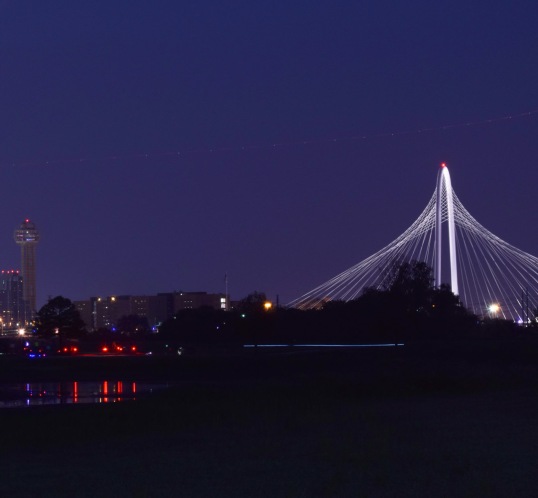 I took this picture, a thirty second timed exposure, on this month’s Full Moon Ride along the Trinity Skyline Trail near downtown Dallas.

The white Calatrava bridge is the Margaret Hunt Hill bridge.

The red lights to the left, reflected in the pond (there wasn’t much water – Dallas in late August is very dry) are the other bike riders waiting for the full moon to rise. The white streak to the right is the smeared-out headlight of a bike rider coming around the trail to where I was.

One thing I didn’t notice – click on the image to view it full size – is that there is a subtle slightly curved line across the sky… with a series of evenly spaced dots caused by a blinking light in the long exposure.

Is it a UFO? Of course not. The extremely busy DFW airport is only a few miles to the left of the photo – it’s an airplane circling to land. Still, I never noticed it when I took the photo… it could be anything… now preserved in pixels.

We’re just waiting for the ufos – dying to be invaded.

one more song from the same album – always loved this one.