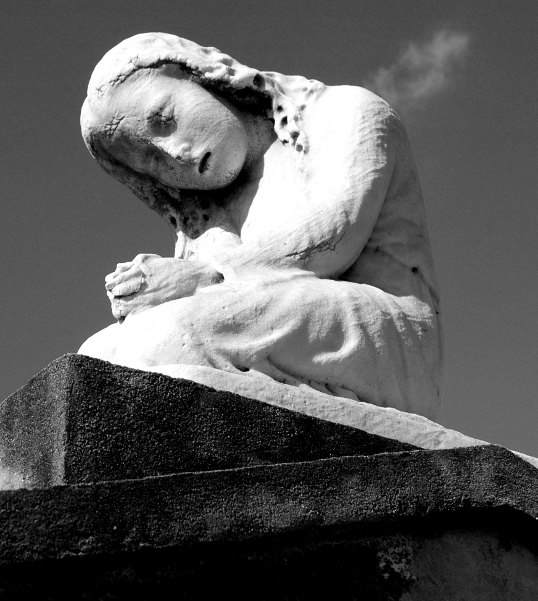 Statue on top of a crypt, Saint Louis Cemetery Number One, New Orleans

Today’s story, for day 6 – And of Clay Are We Created, by by Isabel Allende, translated by Margaret Sayers Peden

And of Clay Are We Created by Isabel Allende, translated by Margaret Sayers Peden

First a subterranean sob rocked the cotton fields, curling them like waves of foam. Geologists had set up their seismographs weeks before and knew that the mountain had awakened again. For some time they had predicted that the heat of the eruption could detach the eternal ice from the slopes of the volcano, but no one heeded their warnings; they sounded like the tales of frightened old women. The towns in the valley went about their daily life, deaf to the moaning of the earth, until that fateful Wednesday night in November when a prolonged roar announced the end of the world, and walls of snow broke loose, rolling in an avalanche of clay, stones, and water that descended on the villages and buried them beneath unfathomable meters of telluric vomit.

—-Isabel Allende, And of Clay Are We Created

There isn’t much I can add to today’s story. Any comment would seem trivial and trite. This one is the real deal. Just read it.

Q. Can you elaborate on the idea of writing fiction—of telling a truth, of telling lies, of uncovering some kind of reality? Can you also talk about how these ideas might work together or against one another?

A. The first lie of fiction is that the author gives some order to the chaos of life: chronological order, or whatever order the author chooses. As a writer, you select some part of a whole. You decide that those things are important and the rest is not. And you write about those things from your perspective. Life is not that way. Everything happens simultaneously, in a chaotic way, and you don’t make choices. You are not the boss; life is the boss. So when you accept as a writer that fiction is lying, then you become free. You can do anything. Then you start walking in circles. The larger the circle, the more truth you can get. The wider the horizon—the more you walk, the more you linger over everything—the better chance you have of finding particles of truth.

Q. Where do you get your inspiration?

A. I am a good listener and a story hunter. Everybody has a story and all stories are interesting if they are told in the right tone. I read newspapers, and small stories buried deep within the paper can inspire a novel.

Q. How does inspiration work?

A. I spend ten, twelve hours a day alone in a room writing. I don’t talk to anybody. I don’t answer the telephone. I’m just a medium or an instrument of something that is happening beyond me, voices that talk through me. I’m creating a world that is fiction but that doesn’t belong to me. I’m not God; I’m just an instrument. And in that long, very patient daily exercise of writing I have discovered a lot about myself and about life. I have learned. I’m not conscious of what I’m writing. It’s a strange process—as if by this lying-in-fiction you discover little things that are true about yourself, about life, about people, about how the world works. 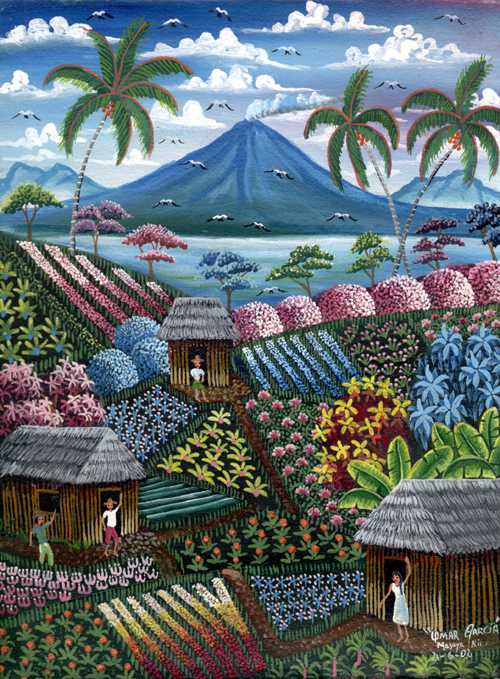 The land of lakes, volcanoes, and sun. A painting I bought on my last trip to Nicaragua.