“Don’t tell me the moon is shining; show me the glint of light on broken glass.”
― Anton Chekhov

Saturday was the annual Cedars Open Studios Tour and Bike Friendly Cedars had organized a bike ride to the various studios and galleries. I had been looking forward to this for months and was concerned as the day approached that there was a prediction of violent thunderstorms. Still, I was up for giving it a shot.

As a compromise, I did drive down in my car instead of taking the train – that way I had a refuge and means of transport if the weather turned really bad. I also took my commuter bike instead of my folder – the big tires, weatherproof cargo box, and fenders are designed to get through any weather. I parked at Lee Harvey’s, dragged my bike out of the back, and pedaled down to the Bowler Hat to meet up with the other folks.

We gathered together and rode off, touring a large number of artists, their spaces, and their work. It was a big variety, from ceramics, jewelry and paintings to gigantic sculptures and architectural works. Everybody was very friendly and there was even a good bit of food and drink set out too.

The weather held out until the middle of the afternoon when it turned cold and rainy. I bailed on the bike tour and hid out under the awning at Lee Harvey’s for a bit. It helped that there was an excellent band, Shoot Low Sheriff, finishing out a set. Clay Stinnett – the artist that painted the work I bought at For the Love of Kettle – was there showing off some paintings.

About that time the sun was setting and the heavens really opened up. I wanted to go to the finale of the evening at Bowman Hot Glass, so I unpacked my rain gear and headed out.

Despite the weather, there was a big crowd at Bowman. A lot of the folks I had seen here and there during the day also ended up at Bowman. I bought a glass Christmas Ornament and carefully packed it into an extra pannier that I brought along.

The highlight was the molten glass Christmas tree. A large structure of wood and iron was brought out and placed in the rain, surrounded by a safety zone demarcated by yellow police tape. A sound system boomed out an appropriate accompaniment. Two women dressed as glow-in-the-dark angels came out and garnished the structure with rolls of paper tape. Then a man in a silver heat suit and a torch lumbered from the building and set the paper and wood on fire.

The glass furnaces inside the building were opened and the bright orange glow bathed the cold and wet crowd outside. Then three glassblowers began grabbing giant blogs of glowing glass on the ends of long blowpipes, carrying them out to the tree, and dribbling the thick liquid all over the tree. In an intricate and dangerous hot dance they took turns running out with their molten burdens, holding them over the tree, then returning for another load.

The hot glass ignited all the remaining unburned wood, flooding the entire sculpture with flame. After a number of trips, the iron armature within was completely covered with strands of glass. It really did end up looking like a Christmas tree – festooned with a thick layer of crystal icicles.

Finally, they finished and everyone cheered. I packed my bike up and set out in the rain and dark to ride the few blocks to my car. I was very grateful for my fenders and Gore-Tex rain gear.

As I pedaled out I took one last look at the tree. Unfortunately, the falling rain was too much of a thermal shock and it shattered most of the glass tree – but it was incredible watching its creation. 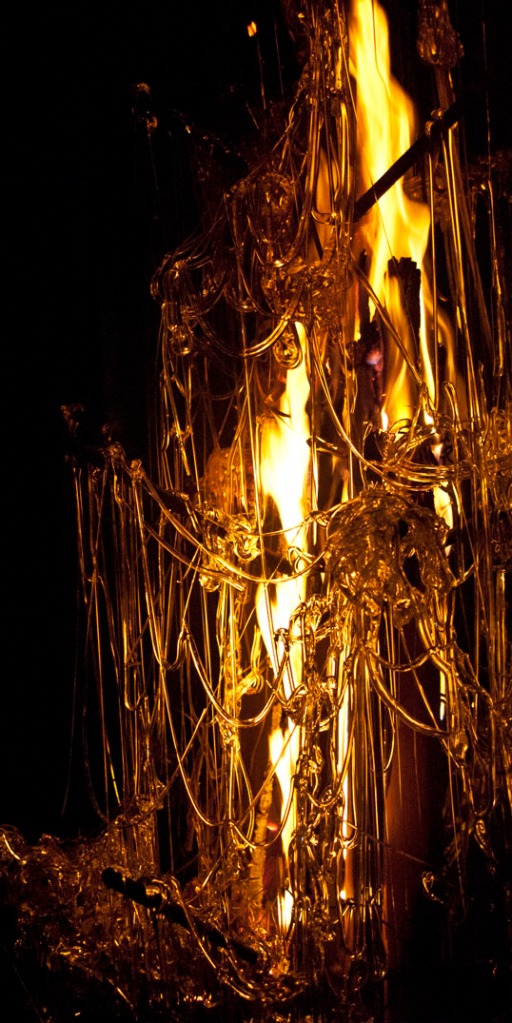 One response to “The Glint Of Light On Broken Glass”