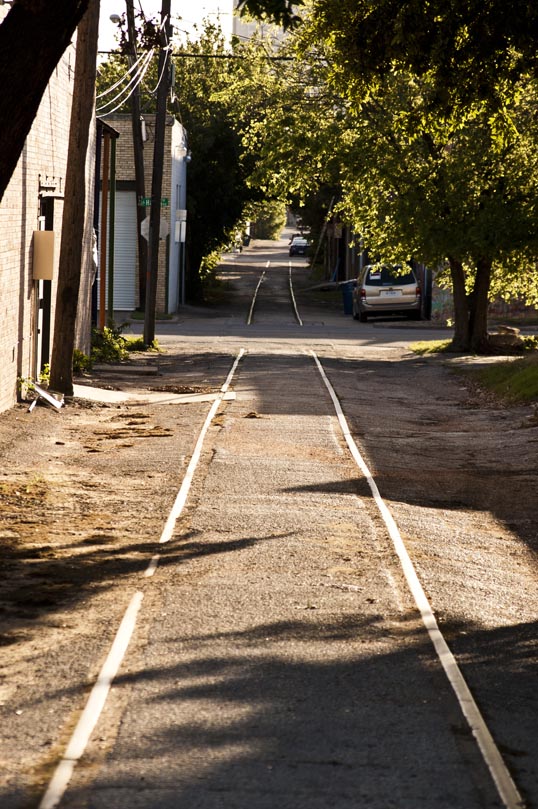 This looks like a back alley somewhere, but it is actually a street – with a name and signs and everything. It is Clover Street, in Deep Ellum, Dallas, Texas.

Although it is little known outside Dallas, Deep Ellum has a long and illustrious, often infamous, history. The rise and development of today’s music owes as much to Deep Ellum as it does to New Orleans, Chicago, California, or Nashville.

Riding my bicycle down Clover Street I see these old steel rails rise up for a couple blocks before disappearing back below the tarmac and concrete. What story do they tell? Was there a streetcar line running down a narrow lane? Or were the buildings factories and the rail line built to bring in raw materials and to haul out product?

That was probably it. Looking at Googlemaps, Clover starts at Trunk Avenue (a railroad name, of course), runs down and ends behind the Adams Hats Lofts. These are urban living spaces converted from an old hat company. But the building’s original use, built in 1914, was one of Henry Ford’s original assembly plants for the Model T.

So you can imagine trainloads of parts going down that line a hundred years ago, and completed automobiles rolling back out to all over everywhere. These would be any color you wanted… as long as it was black.

One response to “Clover Street”