It was Thursday, time for another Patio Sessions concert around the reflecting pool in front of the Winspear Opera House.

This week was the Dallas String Quartet (facebook). The weather was cool and beautiful, rare for North Texas. I hopped the DART train and made it down there right on time – bought dinner from a food truck and settled in. I knew nothing about the Dallas String Quartet – they are an eclectic electric ensemble. Amplified strings, a bass, a guitar, and a drum kit. They play original arrangements of modern, popular hits and are very, very good at it.

It was a lot of fun. 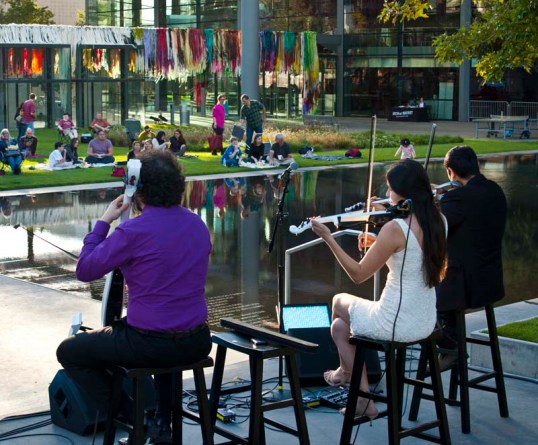 Dallas String Quartet, in front of the reflecting pool in the Arts District
(click to enlarge) 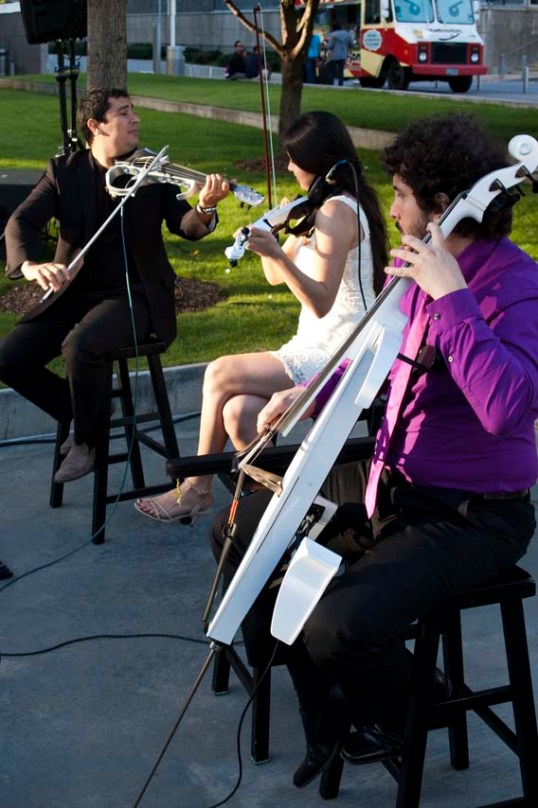 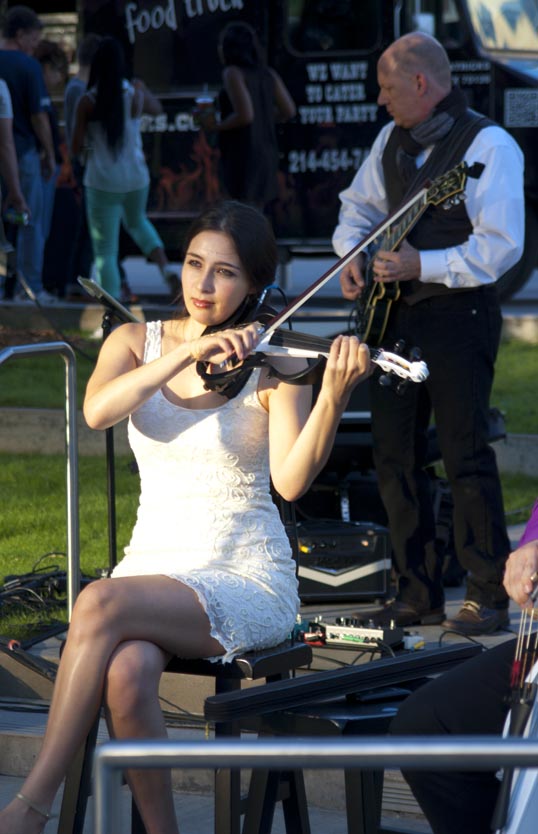 Ever since I have been going to the Patio Sessions, I have been slightly aggravated by people that let their children run amok on the reflecting pool while the musicians are playing. The thin layer of moisture on the flat stone is irresistible to the little ones – so I can’t blame them. However, the shows are very mellow, and I wish the parents would control the kids while the band is on – they are very noisy and it’s very distracting.

I was worried about that tonight – a string quartet can be an especially quiet and introspective experience. It was no problem – there were only four kids or so running around and the Dallas String Quartet was well amplified. Plus, their upbeat, modern arrangements held their own against the kids, the rumblings of the food truck generators, and the tolling of the church bells.

And then, to show how wrong I can be… I noticed a crowd of teenagers rapidly gathering on the reflecting pool. It was a dance class from (I assume) the Dallas High School for the Performing Arts right next door. They were on their way somewhere and took the opportunity to dance for all of us.

In ones and twos… and then as an entire group they would run out and dance. They seemed to have a few set pieces memorized and would show off for each other – then dance for the fun of it. It was kinetic and athletic and flat out wonderful. The band said, “I don’t know who they are, but they are great. I’m sure you can do something with this next one,” and they belted out Michael Jackson’s Thriller.

I took a few photos (I’ll put some more up in a few days) but mostly I sat there and stared and laughed. It was a revelation and a surprise and a marvelous one at that. I’ll probably be able to figure out who the kids were, but I almost don’t want to know. Maybe it’s best they remain, to me, a beautiful mystery.

Young dancers on the reflecting pool at the Dallas String Quartet concert.
(click to enlarge)

PS– Well, that didn’t take long. I found out who the dancers were. They were from the high school – there to rehearse for their work on the Aurora project on Friday, the 18th.

This is what they will be doing:

Ruddy Udder Dance by Claire Ashley
This performance uses a large-scale, painted inflatable sculpture as a prop worn by twelve dancers. A choreographed sequence unfolds. Ashley is interested in both the high-brow aesthetic pleasure found in the painterly abstraction and monumentality of the object itself, and the absurdly low-brow, playful, high-energy, ecstatic dancing experience and pop culture references that ensue as the object moves in space. Directed by Linda James and Kate Walker and performed by the Repertory Dance Company II from Booker T. Washington High School for the Performing and Visual Arts.