Another night, long exposure, a different zoom from the same spot, the abandoned parking garage, I shot from earlier. The white and red bars are the cars going by on the Interstate – smeared out in time. The buildings are part of the Dallas jail complex with the Calatrava designed Margaret Hunt Hill bridge in the background. 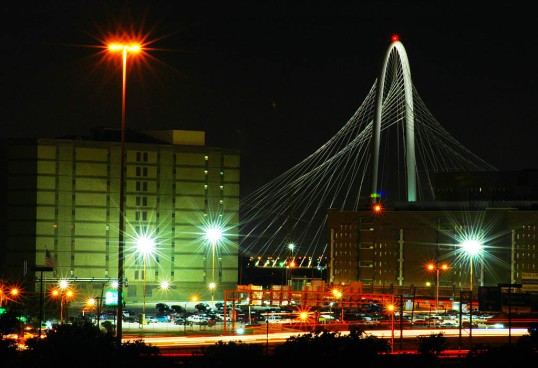 Dallas Jail complex with the Margaret Hunt Hill bridge in the background.
(click to enlarge)

The crossing between the parking lot you see and the building to the right is what I call, “the saddest spot in the world.” When you drive by there early in the morning on the weekends you see a crowd of families crossing from the lot to get in to bail their loved ones out of jail.

I’ve never been in there, but when I was younger I would occasionally get a desperate call to go down there and bail somebody out. After paying the clerk and waiting around for everything to process they would shuffle out. On the way to the car I would ask, “Well, what is is like in there?”

The jail complex is the Lew Sterrett Justice Center.

We all know how nasty the reviews on Yelp can be – but Lew Sterrett gets some intersting press there.

I had a delightful time at Lew. The industrial vibe of the accommodations, combined with the summer camp atmosphere among the guests, somehow managed to be both sophisticated and good old-fashioned fun. The noise level was high, like the best hipster restaurants. And the complementary proctological exam was a nice surprise. Big D, little A, double L, A, YES!

this guy had something to say:

Wow this is the crappiest place on earth. I have been here twice(last time was November 06, and I would like to say the accomodations were dirty, dingy and downright disgusting. The staff seem like former Walmart employees or even criminals themselves(not to say that all inmates are convicted criminals because they are not). One word of advice…as soon as you get in, grab the nearest toilet paper roll(they are like gold in here) eat a couple of bologna sandwhiches, drink some fake cool aid, and live for the moment because you never know what the hell is about to happen around or too you.