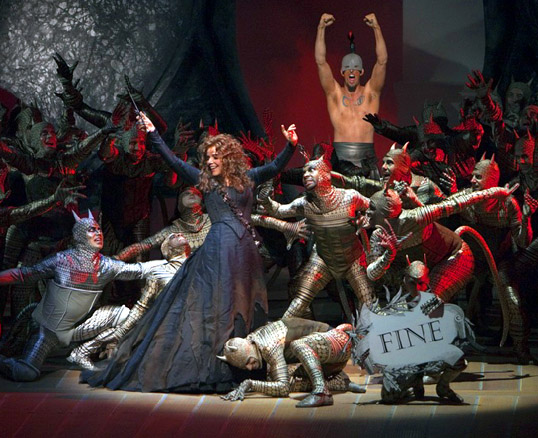 Renée Fleming in the finale of Armida at the Met.

There are few things in life as much fun as falling down a rabbit hole.

Ever since Candy and I went to see Turandot at the Death Star I have been fascinated by the world of Opera and have been learning about it – if only a little bit at a time.

The only problem is that Opera is an expensive rabbit hole and I am broker than broke right now. But there are ways, there are always ways – to be cheap and to find stuff for free. One way to reduce the cost of Opera is to not see it live, but to find simulcast productions. The Met has a series of HD broadcasts and, right now, they are replaying old ones. I was able to score free tickets to a broadcast of Carmen a couple weeks ago, and really enjoyed it.

Before Carmen, they showed previews of upcoming broadcasts and I made note of the wild finale of Rossini’s Armida. Wednesday, after work, even though I was exhausted, I drove up into Plano to watch the repeat broadcast of the opera on a big HD screen at a movie theater there.

The Met’s production, with Renée Fleming and Lawrence Brownlee didn’t get very good reviews (from a Blog, from the New York Times) but it was more than entertaining for my uneducated ears. I especially enjoyed the ballet in the second movement (even with the odd tutu-wearing demons)… maybe that’s another rabbit hole. I enjoyed the singing more than I expected. I even enjoyed the hokey representation of the characters of Love (a young girl) and Vengeance (who looked like he might have been in Metallica) – battling over Armida’s soul.

I did some research into Rossini and Armida, learning that it is a late example of Bel Canto – a term I had heard but never understood before. The florid singing, the coloratura, is what most people, the unwashed masses, make fun of when they think of Opera – but in context it is beautiful and expressive.

I studied the story of Armida and Rinaldo. It’s a classic tale and the basis of many operas and paintings. The bare story of the opera is simple and melodramatic, but there are a few dimensions that I found fascinating. Armida is the classic story of a powerful woman brought down by love, and then jilted. But unlike, say Dido, she is not ultimately defeated. She does not kill herself. Struggling at the end between Love and Vengeance – she chooses the latter.

Rinaldo and Armida, by Francesco Hayez

Slowly I build my knowledge and my repertoire. Oh, and I did buy tickets to the Dallas Opera’s live version of Carmen at the Winspear Opera House in October (the matinee performance on the 27th). The tickets are nosebleed –but I’m excited about actually going to see it live. There will be another broadcast performance on the 25th – in Klyde Warren Park, and I plan on going to see that too.

Doing the research on the styles and history of opera brought back one memory from the spiderwebby recesses in my mind. Prior to, say, 1800, the most prized voices were of the Castrado. In seventh grade (or so) I took a fairly serious (for seventh grade) class in music theory. I still remember studying Jazz and the Blues and having the teacher playing instruments behind our backs and having us figure out what they were (the sound difference between a trumpet and a cornet is hard, but can be done).

We did study a little bit about Opera and its history. The teacher mentioned the Castrado. But she said, and I still remember her exact words, “They had a special operation on their… uhh… throat when they were children that caused them to have high voices. They don’t do that anymore.”

Yeah, right. On their throats. I guess she didn’t have much choice other than to lie to us – those were more innocent times. It didn’t sound right to me, though. Something was wrong, and that’s why, I suppose, I remember her saying that to this day. I knew enough to suspect what the word Castrato meant.

But I couldn’t believe it. She had said “Throat” and that made some sense. Surely, I thought at the time, nobody would cut their kids’ balls off simply to make them sing higher for the rest of their life.

That was too horrible to comprehend.