This Friday I went on a local bike ride that I have wanted to try for a while but never had a go until now. It’s the Dallas version of Critical Mass. The Critical Mass rides have been going on internationally in their present form since the 1990’s. They are large and informally semi-organized rides with the dual purpose of having bicycling fun and acting as a political protest where cyclists take over the streets.

The Dallas Critical Mass runs on the last Friday of every month – originating in the Main Street Garden Park downtown and heading out for parts semi-unknown.

I was invited by the good folks at Bike-Friendly Cedars so I rode my bike to the Arapaho DART station near my house and rode the train south through downtown to the Cedars station. I could have driven to a closer launching point, but I wanted to keep up with the spirit of the ride and only rely on two-wheel-human-powered power… well, except for the huge electric powered train… but you know what I mean. I guess I’m saying I wanted to avoid the automobile for the evening.

I rode around the Cedars a bit then met up with the folks and we rode to the Main Street Park. I don’t know how many riders were there… I would guess a few more than a hundred. That’s not a huge number – until you get them stretched out in a group along the road. I have been doing enough of these rides now that I run into a handful of folks I know at most every one. It’s a bit of fun. 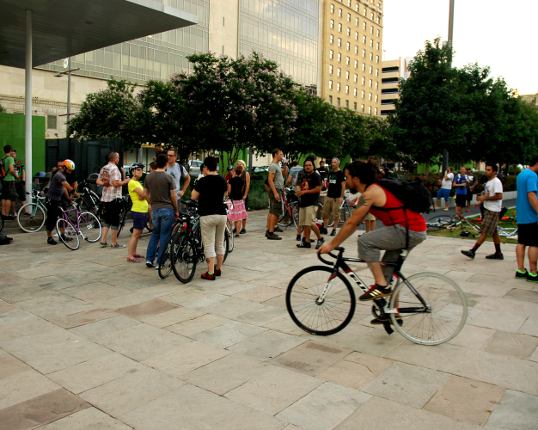 We started out east into Deep Ellum. Sony had a couple sponsored riders on trikes with generator-powered boom boxes to provide music. The ride was slow and crowded – that’s the only downside of these types of things… you have to concentrate on the wheel in front of you and the folks on either side that you can’t look around too much – it takes a lot of concentration to ride in an irregular pack like that.

A wide variety of bikes and riders – from carbon speed-demons to heavy steel retro-cruisers to stripped-down fixies to Wal-Mart mountain bikes. I try to talk to anyone with unique bikes (tonight a Brompton Folder, and a homemade fixie) to learn the various dimensions of bikerdom.

They were corking the intersections – sending bikes out to block the cross traffic so the entire mass of bikes could get through at once. I have really mixed feelings about this – it is technically breaking the law and undoubtedly pisses some drivers off. But that’s one of the points of the ride (that’s why it’s called Critical Mass) – to take over a few streets for a few minutes one evening a month. Bikes have to wait on cars the rest of the time – have to give way to the hurtling metal… I guess taking over for this short time isn’t too bad. Plus, car drivers should learn a little patience – it will make their life a little more pleasant.

After turning into the Exposition Park Neighborhood we moved through part of Fair Park and then turned north into East Dallas. I had no idea where we were until we suddenly jumped up onto the Santa Fe bike trail. This pulled the line way out and it was dark by now – looking ahead at the long line of led-lit bicycles working their way along the narrow strip of concrete was quite a sight.

Unfortunately, there was a bad accident near White Rock Lake – apparently (I didn’t see it) a woman coming the other way without lights collided with some riders while they moved to the left to pass. The entire group stopped, and then moved off into The Lot so that the emergency crews could get in.

After a while, the ride moved off, but a bunch (including me) decided to stay at The Lot. There was food, music, and good beer.

I still needed to get home, so I decided to ride to the DART Station at the north end of White Rock Lake, about five miles away. Another rider offered to ride with me so we took off. The trail around the lake is usually so busy that I have been avoiding it – but at eleven or so at night it was deserted. Our lights were good enough to see without any problems and some summer thunderstorms (all missing Dallas) had coursed through the area and cooled the air… it was really fun riding.

I enjoyed it enough that when I reached the train station I kept going. I wanted to get up to the Forest Lane Station, about another five miles, so I could catch the Red train and get home without a transfer. I am very familiar with this stretch of trail during the day and it was a blast to ride it in the pitch dark (it’s through creek-bottom woodlands and there are no lights whatsoever).

The only difficulty was a stretch of the Cottonwood Trail just south of the train station had a collection of homeless people sleeping on the trail and I had to be very careful not to run somebody over. That would be very painful for everyone.

I caught a train at Forest and when I boarded the car I found a couple of other riders that were also on the way home from Critical Mass. Sort of cool to be talking bikes on a train scooting through the city in the middle of the night.

The last few late night miles home from the train station were fun too – no traffic and a cool breeze. I think I might try some midnight rides here in the Texas Summer – find a route free of cars and obstacles – especially people sleeping in the way.