Last year I went into downtown Dallas at sunset for Dallashenge. 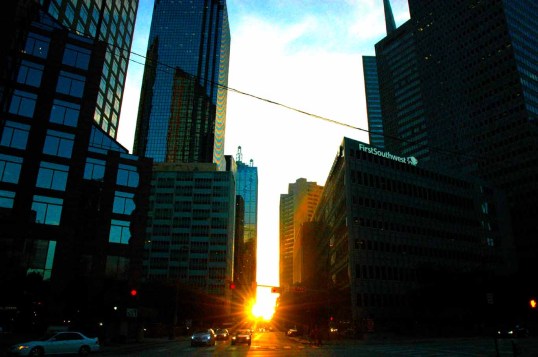 Dallashenge, for those that never read or can’t remember my entries from over a year ago, is the date when the sun sets directly down one of the vast glittering canyons formed by the reflecting glass-clad rows of skyscrapers lining the streets. It is derived (by me) from the more famous Manhattanhenge, from New York.

Dallas and New York are interesting because their central business district streets don’t run on a direct east-west grid. Those that do, such as Chicago, will have their ‘henge dates on the summer and winter solstices… plus their morning and evening ‘henges will be on the same day. For a city on the bias, you have to calculate the henge dates – luckily the website Suncalc makes all that very easy.

So, last year, I calculated the evening Dallashenge as February 15th, took some test shots, and then went down there at sunset and made some photos. I don’t know if the photos do justice, but it was a fun exercise in research, travel, and photography anyway. It was fun answering questions about why I was running out into a crosswalk with a camera on a tripod at sunset.

I have been thinking about a morning voyage to a Dallashenge. Other than the sheer laziness in avoiding getting up that early, I have put it off because I didn’t have a good spot. I was thinking about a parking garage at the city jail – but it wasn’t perfect and I wasn’t sure if photography would be welcome. Then, one day I was riding the DART line to the Convention Center and as the train crossed over the famous triple underpass I realized that there was a walkway along the rail lines. The sight line went straight down Main street and would be perfect for a morning Dallashenge.

During a downtown bike ride I decided to head over to that end of downtown and do some test shots. The spot turned out to be a perfect view down the street, plus it’s a well known spot – you enter the railroad overpass from the infamous “grassy knoll” and look out over the area where the Kennedy Assassination took place almost fifty years ago.

The morning Dallashenge date will be April 19, with the sun rising at six fifty-three in the morning. Now, I have to get up enough gumption to get up that early and head down to get some photos.

The view east down Main Street from the Triple Underpass. The sun will rise right down the middle of the street on April 19, morning Dallashenge. 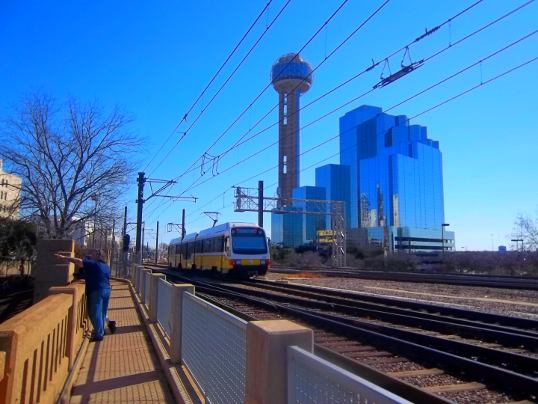 This is the walkway along the rail tracks over the underpass, with the Dallas Hyatt Regency and Reunion Tower in the background.

The view a little to the left of Main Street. That’s the curve of Elm Street. The grassy knoll is on the left, the Texas Schoolbook Depository is the lighter brick building over the trees. The assassination site is right in front of the two cars coming down the road.

3 responses to “Test Shots for a Morning Dallashenge”