In looking around this interwebs thing – looking at photographs trying to figure out what I’m doing wrong and what I can do better – I came across the bromide, “Find the light first, the background second, and the subject third.”

The problem in that here in Texas, the light is either blinding nuclear-hot sunlight, or the pitch darkness of night. Either one – except for a few tiny minutes at sunrise and sunset. This time of year the sunsets aren’t very interesting because of the lack of (or complete coverage of) clouds. Still, maybe there is something.

I’m often driving to work at dawn. Going west, I saw a distant skyscraper illuminated by the orb just peeking over the horizon. It was lit like a fiery finger pointing skyward. Ordinarily, I never even notice this building, but today, it was all in alignment and the orange sunrise was bouncing off the glass just right…. I thought about that and realized that it was the equinox, so the sun would be rising exactly east-west. Though that would mean nothing downtown – I realized that the President George H. W. Bush Turnpike tollroad ran east-west as it crossed highway 75.

I had been walking under there a while back exploring a new trail that has been built under the highway. I was taken aback by how high the tollroad soars as it goes up and over. The High Five near where I work gets all the attention, but the George Bush interchange is as dramatic in a more stark and brutal way.

So that evening, a few minutes before sunset I loaded my camera and tripod up and drove to the Plano Parkway exit – right behind the big Fry’s Electronics store. There’s a parking lot there, under the tollroad, and I lugged my stuff a bit into a weedy field and set up directly under the roadway far overhead and pointed my camera due west, right into the setting sun.

I set up for three exposures per shot on the tripod – then merged them with the HDR software. Since traffic was going by on each image and they would not match, the cars became ghosts in the final tonemapped images. Since a highway interchange isn’t very interesting by itself I played with the parameters until I came up with a hyperactive, over-saturated, surreal result.

Which is what I wanted. Find the light first. 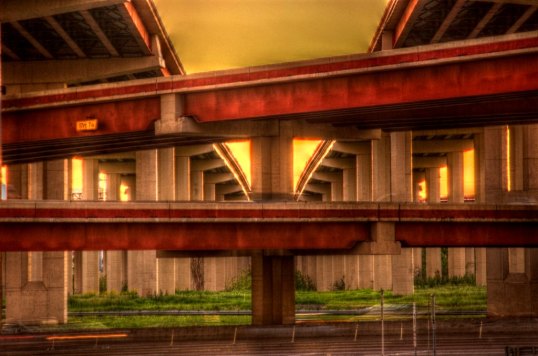 So I have my light. And I even have a background. What I’m lacking is a subject. Pictures without anybody in them can be fun and pretty to look at but they aren’t good enough. They don’t tell a story. I need to figure out how to get people into these HDR composite images – I haven’t seen many people try that. I can’t figure out how to get something interesting – something that tells a story – how to get someone to stay perfectly still while I shoot the multiple exposures.

Something to think about and to work at.