Again, today, I consulted my twitter feed to see where the various gourmet food trucks were distributed around the city. A truck I had never tried before, 3 Men and a Taco, was set up on Davis Street in Oak Cliff. I have wanted to visit the Bishop Arts District, only a few blocks down from there, so I decided to make the drive clear across town.

Cutting across north of downtown I drove through the tunnel that the Woodall Rodgers Freeway has become. They have decked over the road for the new five acre park that is going in overhead. I was working downtown when the freeway was dug – it seemed like an enormous undertaking at the time – I can’t believe that they are now building a wooded park over the top of it. It will be very cool when it is finished – a nice addition of some nature to the edge of the Arts District.

I cut across to Oak Cliff and drove down to Davis Street. This brought back a lot of memories for me. When I first moved to Dallas in 1981 I lived with some friends that were remodeling a house in Kessler Park for a while. I remember riding the bus on those streets to my new job in the skyscrapers of downtown. For a kid that had been in Kansas for years this was really exciting and every day I would look out of my bus windows with excitement, wonder, and anticipation at the amazing future that was sure to come to pass. Well, I was young and didn’t know any better.

The street the house was on, Edgefield, is as beautiful as ever. It looks unchanged in thirty years, except the trees have grown almost together overhead and they were orange with fall colors – georgeous. The house itself was a bit of a shock. It still looked the same in the front, the classic Kessler Park Tudor Revival brick – but the entire back yard was filled with a massive two story addition – making the humble cottage into a gigantic mansion.

The truck was set up at Davis and Edgefield, in front of Urban Acres. I was a little late, so many of the choices were crossed off their menu board, but I chose a Coconut Mango Chicken (with Thai Pepper Slaw) and Sweet Potato Portobella (roasted and topped with an orange balsamic reduction). They don’t call these food trucks “gourmet” for nuthin’ – these were not your mama’s tacos.

As usual… it was very good. 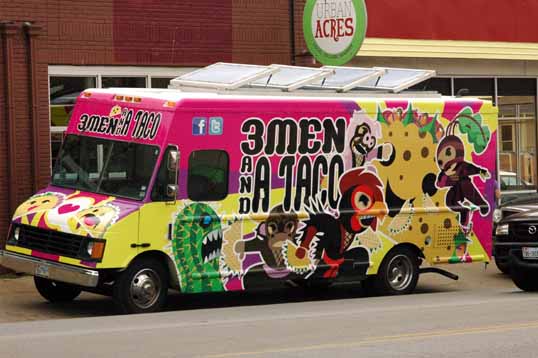 The board with today's selections, next to the "Tip Monster"

The key to a Food Truck's success is to communicate with their customers. The Twitter feed and Facebook Pages have to be kept up, minute to minute. 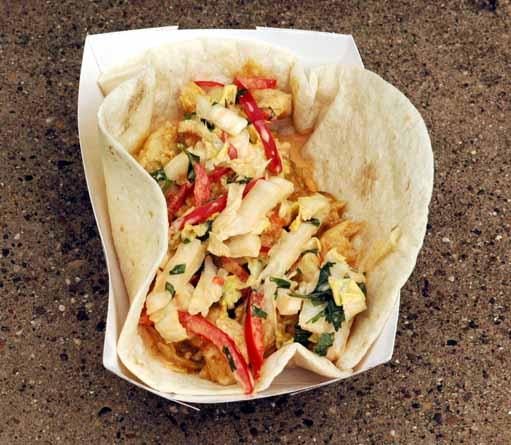