He stands erect by bending over the fallen. He rises by lifting others.
—-Douglas Horton

I rode the DART train into Downtown Dallas for the last Dallas Writing Marathon and as the short line of yellow electric cars climbed out of the tunnel under Central Expressway I could hear a distinct WUP-WUP-WUP sound. Looking out the window, I saw a gigantic lifting helicopter delivering a load to the top of the Chase Tower (the skyscraper with a big hole in it). By the time the train pulled into the station, it had already settled into a parking lot behind the Plaza of the Americas.

A few hours later, after we had finished writing, I returned to the station and discovered the skycrane was taking off again. I ran around, up to the police lines, and watched it carry a load (it looked like electrical equipment) up to the notch in the top of the vaulted cap of the skyscraper.

The helicopter was a Sikorsky S-64, modified by Erickson Air-Crane. It had a plastic bubble facing backward into the cargo area where a crewman could sit and direct a precision lift. The whole operation was extensive – from police security to a line of trucks delivering cargo to be lifted to a tanker truck of jetfuel to keep the copter going.

It was all pretty cool. I took some pictures. 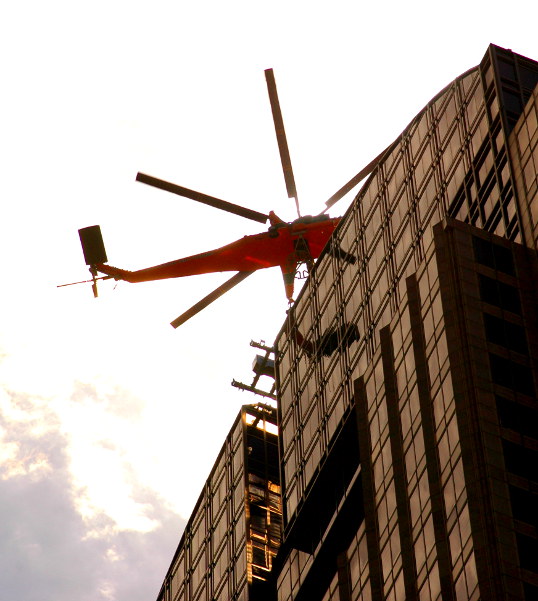 Sikorsky S-64 delivering a load to the top of the Chase Tower, Dallas, Texas

Erickson Air-Crane and the Dallas Skyline 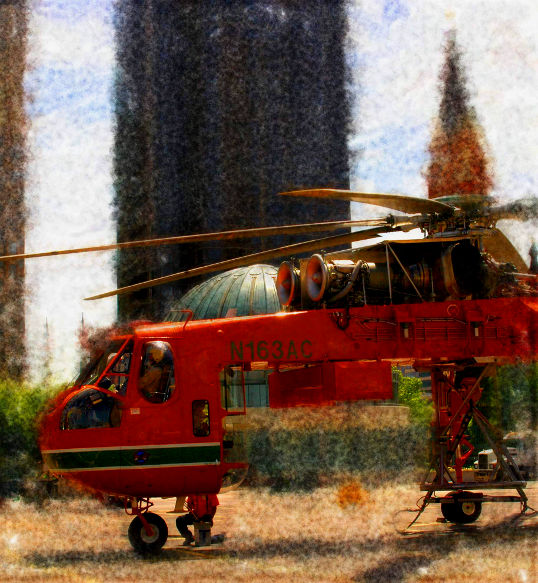 Another mode of accumulating power arises from lifting a weight and then allowing it to fall.
—-Charles Babbage