“While serving one of his countless sentences of imprisonment, he was given ex-wrestler Paul as cell companion. Paul was at that time a dock worker; he was in jail for having, during a strike riot, remembered his professional past and applied the grip known as a double Nelson to a policeman. This grip consisted in passing one’s arms through the opponent’s arm­pits from behind, locking one’s hands behind his neck, and pressing his head down until the neck vertebra began to crack. In the ring this had always brought him considerable applause, but he had learned to his regret that in the class struggle the double Nelson was not done.”
― Arthur Koestler, Darkness at Noon 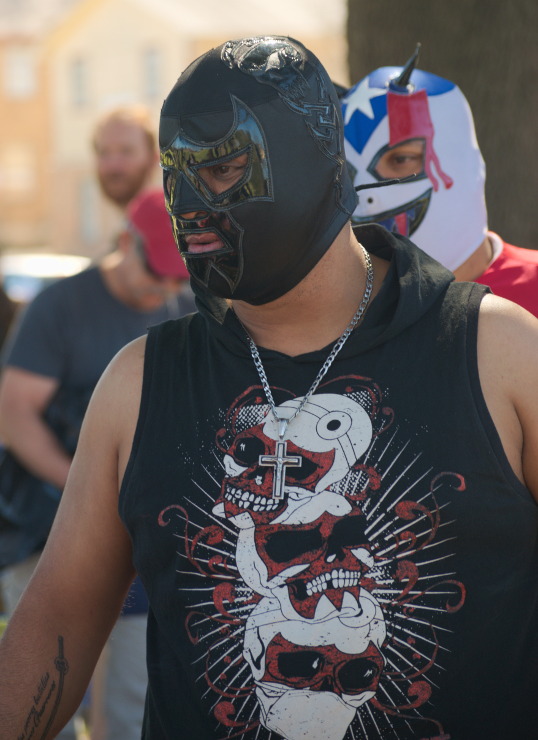 “Man is least himself when he talks in his own person. Give him a mask and he’ll tell you the truth”
― Oscar Wilde 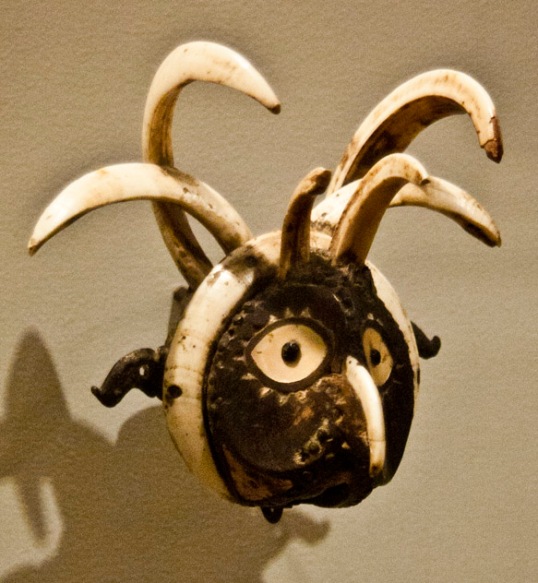 Label Text:
Among the rarest of sculptures from the Southeast Moluccas are small masklike objects depicting the head of an animal. The dancer held the masklike object in his mouth by the tab extending from the back of the head. This type of object is thus sometimes referred to as a mouth mask. Only four mouth masks have survived, three of which are in European museum collections and represent pigs. This Dallas mask depicts a bird, probably a rooster. The sculptor imaginatively used boar tusks to create the white feathers that rise above the head and encircle the bird’s face.

Pig mouth masks are associated with a distinctive fertility ritual called porka, which encourages increase and abundance among human beings, animals, and vegetation. The bird mask shown here was used in a war dance that was performed by men and portrayed headhunting.

“Harvey wasn’t interested in the clothes, it was the masks that mesmerized him. They were like snowflakes: no two alike. Some were made of wood and of plastic; some of straw and cloth and papier-mâché. Some were as bright as parrots, others as pale as parchment. Some were so grotesque he was certain they’d been carved by crazy people; others so perfect they looked like the death masks of angels. There were masks of clowns and foxes, masks like skulls decorated with real teeth, and one with carved flames instead of hair.”
― Clive Barker, The Thief of Always

“Masquerades disclose the reality of souls. As long as no one sees who we are, we can tell the most intimate details of our life. I sometimes muse over this sketch of a story about a man afflicted by one of those personal tragedies born of extreme shyness who one day, while wearing a mask I don’t know where, told another mask all the most personal, most secret, most unthinkable things that could be told about his tragic and serene life. And since no outward detail would give him away, he having disguised even his voice, and since he didn’t take careful note of whoever had listened to him, he could enjoy the ample sensation of knowing that somewhere in the world there was someone who knew him as not even his closest and finest friend did. When he walked down the street he would ask himself if this person, or that one, or that person over there might not be the one to whom he’d once, wearing a mask, told his most private life. Thus would be born in him a new interest in each person, since each person might be his only, unknown confidant.”
― Fernando Pessoa