“With almost superhuman strength she seized Virginie by the waist, bent her forward with her face to the brick floor and, notwithstanding her struggles, lifted her skirts and showed the white and naked skin. Then she brought her beater down as she had formerly done at Plassans under the trees on the riverside, where her employer had washed the linen of the garrison.

Each blow of the beater fell on the soft flesh with a dull thud, leaving a scarlet mark.”

Yesterday I finished Zola’s L’Assommoir and enjoyed it a lot. In doing some online research about the book I discovered it had been made into a 1956 French film called Gervaise that wasn’t supposed to be too bad. It was directed by René Clément and starred Maria Schell (sister of Maximilian). I was able to find a copy of the film and waited until I finished the book – then sat down to watch it.

L’Assommoir is a big, complicated, 500 page book and I knew they would have to slim it down to get the story into a movie. They did, but remained faithful to the spirit of the Zola novel. The movie concentrates on Gervaise – not surprisingly – and leaves out a lot of the tumult around her. I really liked the film – despite being over sixty years old (a year older than me) it holds up well. Gervaise’s decent into abject poverty, despair, and destruction is rushed as compared to the book – she is still alive at the end of the film and the book conveys the horrors of her descent better. There is a political subplot added to the movie that wasn’t in the book – and I didn’t think it added much. But otherwise, I thought the movie did a good job and illustrated the look of a lot of the story that I had trouble imagining (having never been to Paris of the Second Empire myself).

Like the book, the movie suffered from prudish editing – luckily the version I found seems mostly uncut (it was 116 minutes long). The biggest difference seems to be in the fight in the wash house between Gervaise and her arch-rival Virginie at the beginning of the story – the version I saw had a bloody scene of Gervaise tearing off Virginie’s earring and then beating her bare bottom with a wooden paddle. Tame by modern standards – those scenes were too much for the 1950’s.

The movie is one of the most expensive (in modern currency) foreign films ever made. The sets are extensive, detailed, and realistic.

And the best thing is that many of the memorable set pieces of the book are preserved. The wedding party and its visit to the Louvre, the horrifying fall her husband takes off a roof on the day she is to buy her shop, Gervaise’s Name-Day feast, Coupou’s alcoholic madness (though transferred from an asylum to Gervaise’s shop – probably more dramatic that way), and most of all the famous fight between Gervaise and Virginie in the wash house – all were giving loving care and exciting treatment.

Gervaise and Virginie going at it in the wash house. Gervaise’s man, Lantier, has just run off with Virginie’s prostitute sister, Adèle.

Virginie about to hit Gervaise with the wooden paddle.

Gervaise has reversed the fight and is about to give Virginie a vicious paddling.

This scene was apparently too much for the censors. Virginie is about to get hers.

The wedding party goes to the Louvre, here Gervaise and Goujet are standing in front of Delacroix’s Liberty Leading the People. 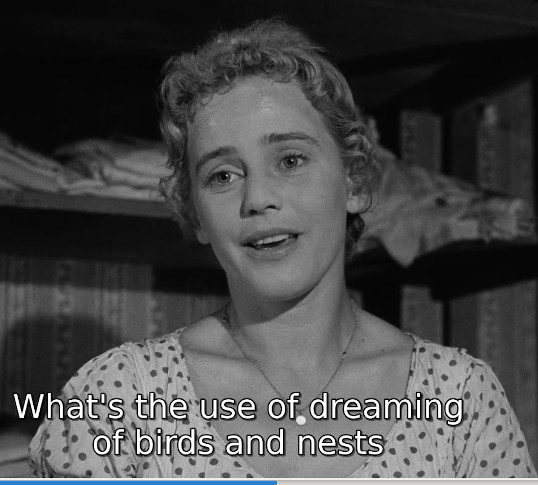 Gervaise singing at her Name Day party – the high point of her life. 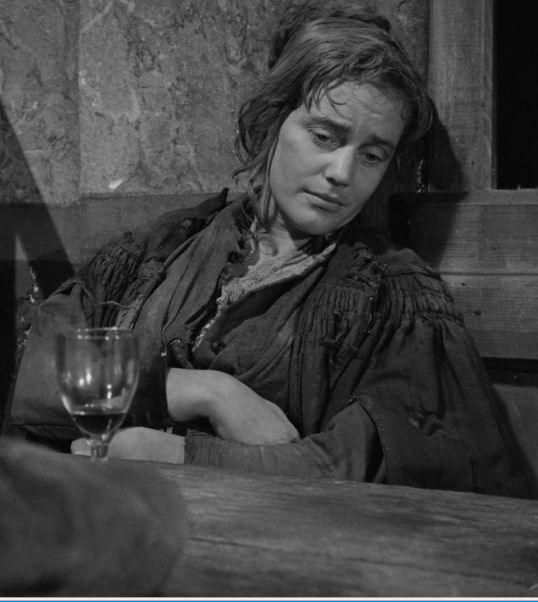 A ruined and despairing Gervaise at the end of the film.

Compare this scene to:

At least Degas’ woman still has her hat (Gervaise has pawned hers).