“Strange can be quite normal. Strange can just be the phrase ‘That is not important’ as an answer for everything. But if your son never answered you that way before, then the fourth time you ask him why he’s not eating, or if he’s cold, or you send him to bed, and he answers, almost biting off the words as if he were still learning to talk, ‘That is not important’, I swear to you Amanda, your legs start to tremble.”
― Samanta Schweblin, Fever Dream

So, the next novel in line on my reading plan was Fever Dream by Samanta Schweblin. A very short novel, with few characters (though a unique take on point of view) I was able to read it in a day and a half.

It’s a horror story, with elements of the supernatural and environmental disaster in the forefront. It’s told as a conversation between a young boy (who is half someone else) and a dying woman – his summer-renting neighbor. The two of them, the woman’s young daughter, plus many other people, and most of the animals, in the area have been exposed to a toxin of unknown nature. The wealthy men of the neighborhood seem to be doing something that releases the toxin, but nobody knows for sure.

It’s a horrible illness – killing most in a few days and leaving the survivors disfigured and changed… somehow. A story told in an effective and interesting way about a mother’s worst nightmare.

But, I’m sorry, in the end the novel didn’t do much for me. I did read an English translation – and I could almost feel the subtlety of the original Spanish washed away off the edges of the paper. Spanish has words that English lacks, words for emotions and relationships that I may have been missing. The book held plenty of horror, dread, and mystery… is that enough? Does it need a payoff? A point? Even if it is short and only takes up a few precious hours of your life?

Probably not. Still, I wanted at least a bit more.

I see than Netflix has made a film out of this movie. I’m tempted… but I can’t see how this harrowing, yet thin, story would look in pixels and sound. I’ll probably watch it eventually, just not now.

OK, looking at the order I chose for my reading plan (chosen by the roll of the dice) – Is another Zola novel – The Debacle (the next-to-last Rougon Macquart novel)… but I’m not in the mood for another long novel… just yet. So it’s Berg, by Ann Quin next. Then on to Elect Mr. Robinson for a Better World by Donald Antrim. A couple more shorter novels. 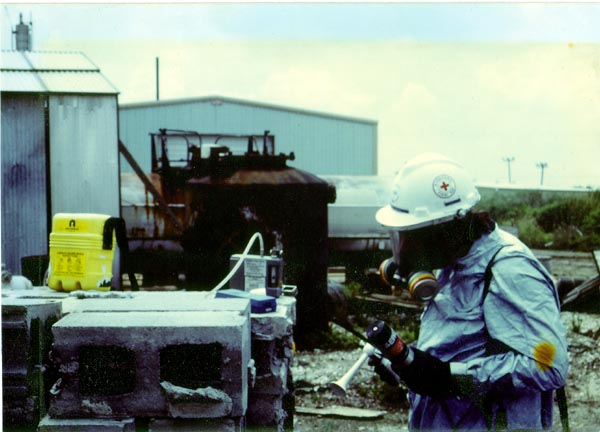 A photograph of me working at the Geneva Industries Superfund site in South Houston, Texas in 1984.

I was cleaning out a closet at home and came across this old photograph of myself in my youthful prime. Good lookin’ feller, don’t you think?

The picture was taken in, I believe 1983 or 84 – at the Geneva Industries Superfund Site in South Houston, Texas. The site was a bankrupt and abandoned manufacturing plant for Polychlorinated Biphenyls, amongst other nasties.

I’m not sure exactly who I was working for when the picture was taken… Weston Engineering, Ecology & Environment, or Jacobs Engineering… at any rate I was a contractor to the Environmental Protection Agency’s Superfund division. I was part of the TAT – the Technical Assistance Team – that provided expertise during the emergency removal at the site. We had a certain amount of money to go in, take care of any immediate hazards and prepare the site for a long-term remediation to come.

As you can see, I’m suited out and doing some monitoring to insure our safety plan fit the hazards on site. I’m wearing a respirator, which worked well because the major inhalation hazard was dust particles contaminated with PCBs which the respirator protects against well. The yellow case on the cinderblock is a rescue air pack. Inside is a coil of steel tubing full of highly compressed air attached to a plastic hood. If something went wrong and toxic gases were released I could throw the thing over my noggin and have five minutes of safe air to get the heck out of Dodge. Yes, I had practiced that and was confident I could get it on in a hurry.

Between me and the rescue pack are a couple of sampling pumps. Usually these are worn by workers, but I was using them as area samplers. I had a small portable lab set up either on site or in my hotel room and could quickly analyze the samples on a daily basis to make sure something unexpected wasn’t going on.

In my left hand I’m holding the probe of an HNU photoionization dectector – used to detect organic solvents in the air. The state of this equipment in 1984 was a lot more crude than it is today – the thing was big and most of it is hanging out of frame on the strap over my shoulder. In my right hand I’m holding an air horn. That site had a lot of water-filled holes, sumps, and pits all over it and it was so easy to fall in. I always carried that horn in case I got in trouble. You don’t see it, but I also had a radio – wrapped in a plastic bag – taped to my right arm.

In the background, past the rusty tank and before the metal building, you can see a long horizontal cylinder. This was an abandoned tank car that once was full of chlorine and the piping was all rusted. We went to a lot of trouble to mitigate that thing (this picture was probably taken right at the start of that operation) because that much chlorine released in the middle of Houston could have been devastating. It turned out to be empty.

Another tough job we did on that site was to plug an oil well. PCBs are heavier than water and there was a fear that the contamination would follow an old, uncapped well down through a thick clay layer and contaminate the city’s drinking water aquifer far below. We used some old maps to locate the well’s probable location and I went out with a steel tape and spray painted a big X where I thought it was (the whole area was paved over long after the well was abandoned).

We brought out a portable air compressor and a jack hammer and I was chosen to go out there fully suited out and jackhammer down through the concrete. I had some experience with using a jackhammer in protective gear (some work I had done the previous year around St. Louis – but that’s a whole ‘nother story), I was young and strong then, and I had done the measurements – so if I was wrong it would be me that had to do all the wasted work. I was very proud of the fact I hit that wellhead nail right on the head.

Then we brought out an entire drilling rig, full of roughnecks slinging pipe wearing respirators and Tyvek Suits in the Houston heat. Those guys drilled out the old mud, broken concrete, and burlap sacks that plugged the well, and then we concreted the whole thing up.

If you look at the Geneva site now you’ll see a bare green mound in the middle of a pretty rough part of the city. Most remediated waste sites look like this – the open ground patterned with the piping system and tanks of a groundwater interceptor and treatment system. Back then, though, it was frightening complex of rusting equipment, open pits, and ponds full of toxic chemicals.

Over a few jobs I spent months at Geneva. I worked even more at Crystal Chemical on the other side of Houston (I’ll write about that some time- real horrorshow). Then there was Cleve Reber in the swamps of Louisiana and the big train derailment in Livingston. There was a burning subterranean landfill in Tulsa, and countless oil spills all the way from New Orleans to West Texas. There were chemical trucks turned over in ditches, leaking rail cars, and burning pesticide factories in small towns.

I spent a lot of time when I was young out in isolated unpleasant places cleaning up other people’s messes. Actually, I didn’t work at this too long – nobody did, nobody could. It wears on you. It’s when you realize that wearing that respirator and mask, that suit with gloves and boots taped to the sleeves and legs so that nothing can leak in, feels normal, feels natural, that you realize it’s time to move on.