Friday, October 16, was a day I had been looking forward to for a long time. It was the night of Aurora – an every-two-year festival of visual arts held in Dallas. I had thoroughly enjoyed the Aurora two years ago and couldn’t wait for the next.

Again, I planned on a bicycle ride to the event in a group sponsored by Bike Friendly Cedars. The idea was to decorate our bikes with lights and such and therefore, present a visual spectacle – or something along that line. We would meet up at Main Street Garden Park in downtown, ride through the city center, down and up through Deep Ellum (for the derisive amusement of all the folks enjoying the nightlife there), then plunge into the dense crowds of the event.

I wanted to participate in the spirit, although I am not much in terms of decorating or mobile visual artistry. I bought some read and green LED tubes for my bike wheels, but was stymied in any additional ideas for luminous adornment.

In my mind there was an image of a disco ball on a bicycle, illuminated and spinning, casting tiny white spots on the buildings on the side of the road. This remained only in my mind, however, because I could not figure out how to pull this off, given my meager allotments of time, energy, and, especially, funds.

A couple days before Aurora, I left work in my car – I had some errands to run. As I sat down after walking across the vast parking lot I realized that I should have used the restroom before I left – I had to pee. No problem, there is a Wal-Mart across the highway from my work and I was heading in that direction. I’d simply stop there and run in to their bathroom.

And I did. On the way back out I walked by a Clearance section. This is a couple rows where all the returned or unsold merchandise is piled willy-nilly with bright markdown price stickers attached. It is a unavoidable attraction to look through this ignoble collection of unwanted stuff – items that can’t even make it on the regular shelves of Wal-Mart.

And there it was – right in the middle of this beastly mess. It was a tiny disco ball, mounted on a base, with three LED lights attached. The thing was called a “Locker Disco Ball” and was designed to be hung up in a high school girl’s locker. It had a little sticker on the front – extolling “Teens Against Bullying.” Best of all, it ran on three AA batteries, included. Even better, it was marked down to five dollars.

It would be a simple thing to mount this thing on the rack of my folding bike and then direct my two (surprisingly powerful) rechargeable bike headlights onto the thing. So I bought it and took it home. The included batteries were (not surprisingly) dead, but a fresh set set it spinning merrily around.

So I set to work with some scrap plastic, a few angle braces, and a pop rivet tool. A year ago, I had made a custom extension to the Crossrack on my bike to hold a rack trunk and I wanted to make something I could clamp to that. Before too long, I had a lighted disco ball (tiny, but serviceable) mounted to the rear rack of my Xootr folding bike.

The Disco Ball attached to the rack on my bike. 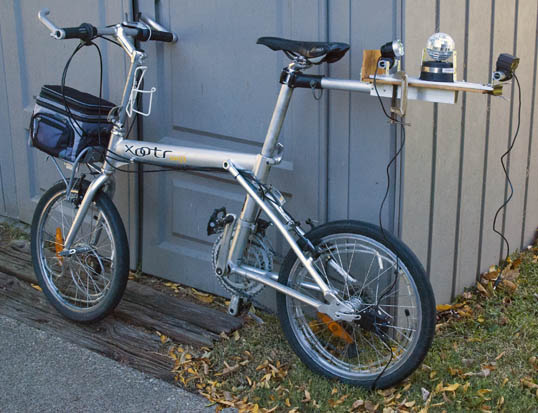 The Disco Ball on my Xootr folding bike.

It felt pretty delicate – but what the hell, I took the DART train downtown and waited for the ride to begin.

I’m not sure what the whole thing looked like – it was behind me after all. Probably, pretty stupid. Still, people riding around kept asking about it – it was unique at least.

We rode down through a very crowded downtown (there was a lot going on – Aurora, The State Fair, some concerts, a Mavericks Preseason Game, and a large crowd on Main Street enjoying the cooler fall Texas Air). We turned on Houston Street and again on Young to head into Deep Ellum.

As we were climbing the hill between Pioneer Plaza and City Hall I hit a particularly steep pothole. I had been riding carefully and avoiding obstacles, but at night and especially on bad downtown roads there is only so much you can do.

I felt the back of my bike kick up as it came out of the whole. Of course, I couldn’t see anything but I swear I felt a slight lightening of my bike as the mirrored ball popped out of the motor housing. I heard a collective sigh of the folks riding behind me as the disco ball smashed into the street. There was a final crush of broken glass as someone inadvertently struck it with their wheels.

At the next stoplight I turned and took a look. The ball had come completely out of the base, which was still attached to the rack. At least it wasn’t a failure of some of my own construction. I shut the two lights off and pedaled on.

So that was that. Five dollars down the drain.

I wasn’t sad, of course. The important thing is that I had given it a try and had at least figured out a way (mostly by pure luck and having to take a pee at the right time) to mount a lighted disco ball on a bicycle.

Candy and I couldn’t afford to go visit Lee in New Orleans for Mardi Gras this year… but we had to go to a parade. Luckily, the Bishop Arts District in Oak Cliff had their Mardi Gras on. Saturday was a run and Sunday was a parade.

It was a blast. Though not up the the standards set in New Orleans by the big Krewes, it was still a fun time. Plus, it was a lot easier to get there, park, and find a place along the parade route (The logistics of going to Carnival in New Orleans is daunting).  The parade had a nice neighborhood feel to it with a lot of schoolkids, bicycles, and dogs walking along. Still, it had a lot of floats too – most with a strong sense of humor.

There were beads thrown, crawfish gobbled, and a beer or two tossed down. There was fun for young kids and grown kids too. 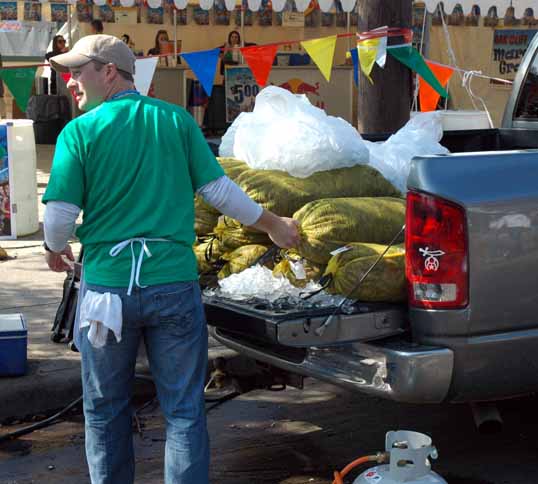 Bags of live crawfish iced down.

The crawfish go into the pot. One looks like he's going to make a run for it.

The crawfish are boiled with potatoes and corn 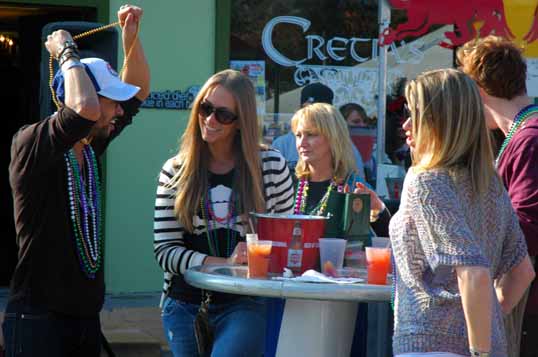 This guy is watching the parade from his own shop.

A kid on a float is taking his own photos.

These kids were across the street from us, having a great time.

Kermit on the back of a tandem.

Instead of beads, this woman wanted to throw live alligators. 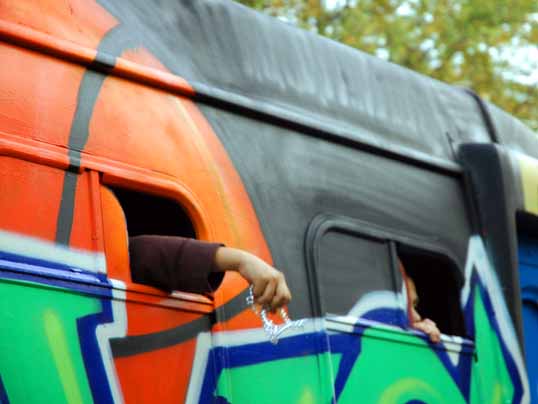 A very shy bead thrower in the parade.

Dancing in the parade

Yes, Ron Paul had a float 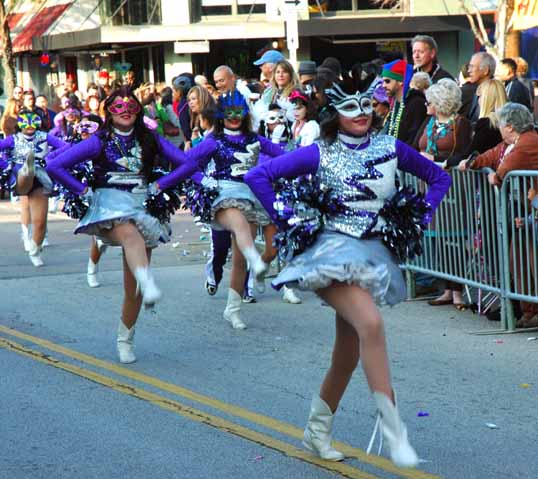 It's Texas, so there has to be a dance team. 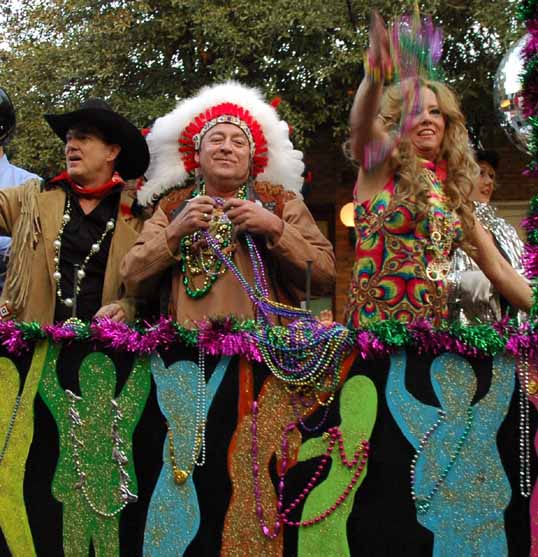