I have been sort-of interested in… and planning to write about the idea of guerrilla publishing – using modern technology to distribute text in new and unusual ways. In that vein, one day I was surfing around this internet thing and stumbled across an article entitled Dead Drops: What To Do If You See A USB Stick Sticking Out Of A Wall.

This seemed very interesting to me, so I researched the whole idea some more. What you do is leave a USB thumb drive in a public place – like cemented into a wall – with the business end sticking out. Then people can come by and drop off any files they want. The term “Dead Drop” comes from the spy world – where information is dropped off to be picked up by someone else.

There are plenty of problems with this: the USB drive is susceptible to thievery or vandalism, there is the possibility of a virus or other software attack, and finally is the simple uselessness and strangeness of the idea.

These seem surmountable objections to me, so I’m working on plans to put out my own USB Dead Drop.

In the meantime, I wanted to explore the idea further. There is a website with a database, and I found a working Dead Drop here in Dallas. It is in a wall in Exposition Park and was placed there as part of an art project.

Dead Drop, The red arrow points to the USB drive mounted in the wall. 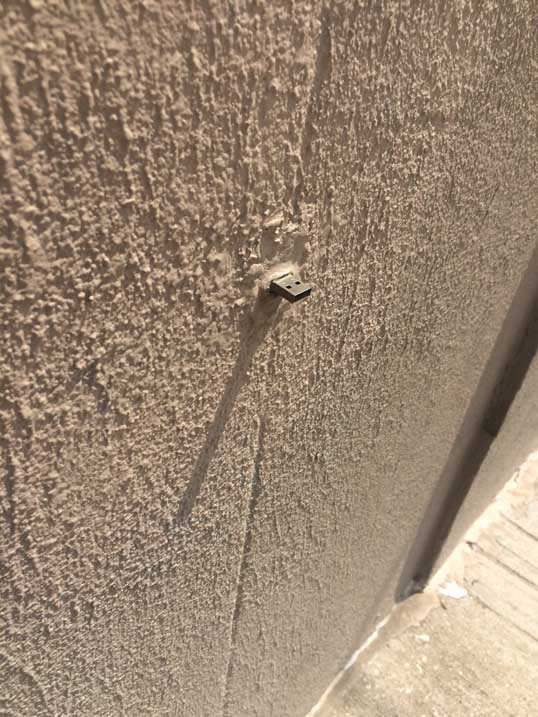 The USB drive sticking out of the wall.

So today, after a fun bike ride around White Rock Lake and to a local Taco Place, I headed on down toward Fair Park to visit the Dead Drop. It was very easy to find.

In order to protect myself from a possible virus, I used a cheap Android Tablet that I carry with a portable keyboard to write with while I’m on my bike. It has a three-headed USB cable that I usually use for a keyboard and mouse. 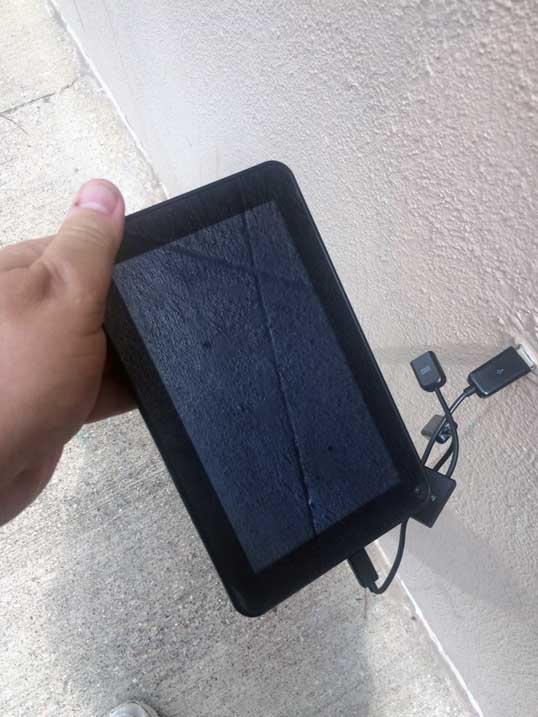 My tablet hooked up to the Dead Drop USB. It was very hard to see in the bright sunlight.

It hooked up easily to the USB mounted in the wall. The one problem was that the screen was very difficult to see in the bright Texas sunlight – I kept having to retreat to a shady spot to figure out what I was doing.

I wanted to leave something behind, so I copied a PDF – a four page short story that I had written (I didn’t include my name) onto the thumb drive and chose an odd image to add to the ones already there. Someone parked on the street right next to me as I was finishing up – the woman gave me an odd look. I’m sure she was very confused about this weird guy standing on the sidewalk with a tablet hooked up to the wall with a cable.

So no big deal… Now I need to stop by the computer store and buy a thumb drive…. I have an idea where I want to put the thing.