“If you want to really hurt you parents, and you don’t have the nerve to be gay, the least you can do is go into the arts. I’m not kidding. The arts are not a way to make a living. They are a very human way of making life more bearable. Practicing an art, no matter how well or badly, is a way to make your soul grow, for heaven’s sake. Sing in the shower. Dance to the radio. Tell stories. Write a poem to a friend, even a lousy poem. Do it as well as you possibly can. You will get an enormous reward. You will have created something.”
― Kurt Vonnegut, A Man Without a Country 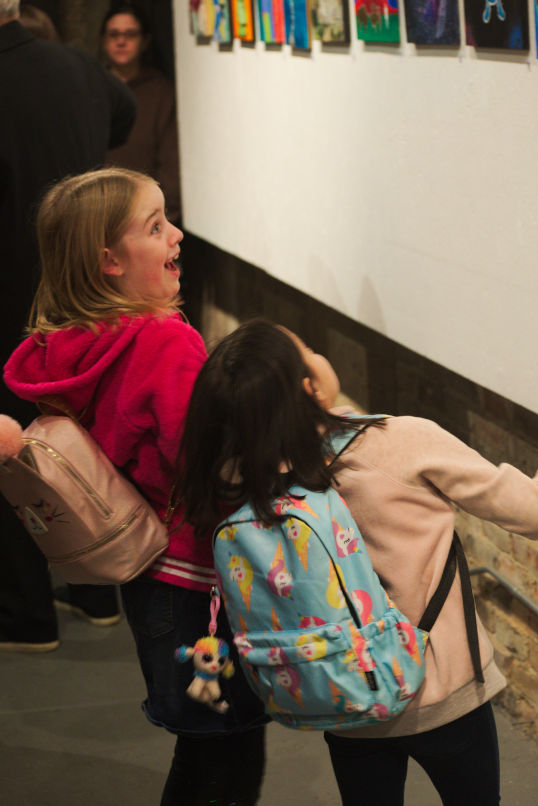 Two girls enjoying the art for sale at the “For the Love of Kettle” event.

Sometimes, there is something you know you need to do but you don’t really feel up to it and almost don’t go? When you finally gut it up and trudge out the door – you are really glad you did. That happens all the time, doesn’t it.

Every year there is this event at the Kettle Gallery in Deep Ellum – For the Love of Kettle.

“For the Love of Kettle” is one of the most highly anticipated events of our year. This One-Night-Only, annual fundraiser keeps Kettle Art Gallery operating in the black, allowing us 51 weeks a year of eclectic, North Texas based, cultural programming. Over one hundred and fifty, 9 x 12 works will be available for just $50.00 each, created by artists who exhibit & support this gallery. There are no previews or pre-sales available to anyone, so please get here early and grab a place in line, as the doors open at 7:00PM sharp.

I have gone to this event every year since 2014 – I’ve written about it a few times:

The Weird and Wicked World of the Singing Cowboy

2019 was a difficult year and I’m trying to spend as little money as possible to recover. Even fifty bucks for a painting was more than I wanted to spend – so I was thinking about not going (why go if I’m not going to buy anything?). But then I remembered that I have an envelope stashed away that I put extra cash in every now and then – saving to buy a fountain pen. I checked the envelope and I had the fifty bucks I needed already saved – so off I went.

In years past, I arrived at the event a little over an hour early and was usually the fifth or sixth person in line. The Transit Gods were good to me this year and the train deposited me in Deep Ellum a good two hours plus ahead of time. I was shocked to discover folks already in line. So I joined in. One of the things I like best about the “competitive shopping event” is talking to people in line – especially about strategy on getting the painting you want and looking through the windows at the art on display.

An hour before the doors open, the line on the sidewalk outside Kettle Art Gallery grows. It eventually reaches around the block.

I picked up a new technique this year. I had brought a mild telephoto lens and was able to take photos of the art on the wall – then blow the pictures up on the camera screen to read the numbers under the artworks. This is key so you can write down the numbers of the art you want – dash to the desk and order it before someone else does.

This is the actual shot through the Kettle Art Gallery window used to get the number of the artwork I wanted – 130. Actually I liked all three of these and wrote the numbers on a card.

So I wrote five numbers (130, 128, 129,133, 2, 156) down on a 3×5 card and decided to rush to the front desk as soon as the door opened. I know that limited my choices and there were so many good things there – but I could only buy one and I have this very bad habit of overthinking and getting too excited when those doors open. I need to make a choice and stick with it. With five numbers I was sure to get one of them – there were only six folks in front of me in line. A seven sharp the doors opened and I rushed right to the desk. The folks in front of me were buying multiple artworks, but the number highest on my list – 130 – was available, so I bought it.

Artwork on the wall at the “For the Love of Kettle” event at the Kettle Art Gallery.

Artwork on the wall at the “For the Love of Kettle” event at the Kettle Art Gallery. 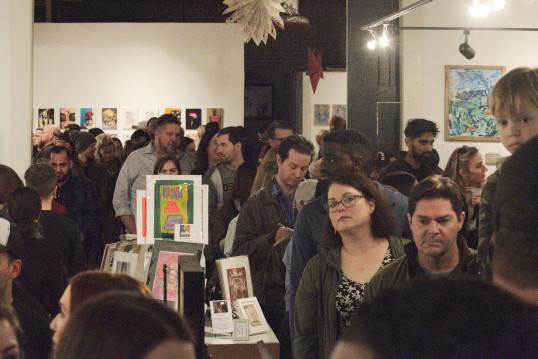 The line to buy artwork immediately grows to fill the gallery.

As the art is purchased, the numbers are crossed off the board. You can see the one I bought, 130, is crossed off. 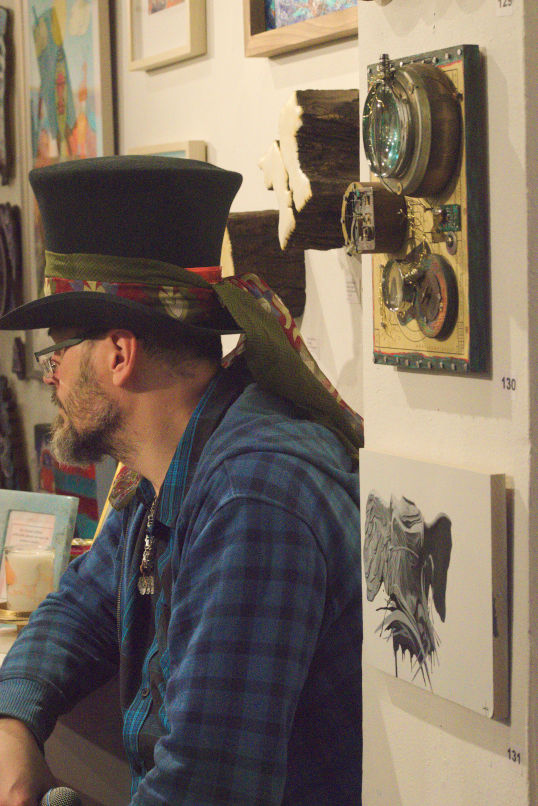 The work I purchased was hung near the main desk, I kept an eye on it until I could pick it up. I liked it even better when I saw it up close.

I love walking around, pushing through the crowd, looking at the art, talking to folks about what they bought and what they wanted and didn’t get. 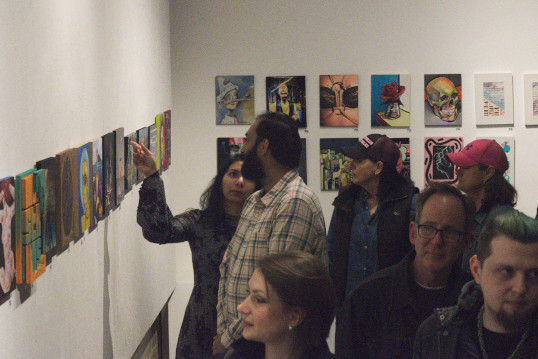 Looking at the art at the “For the Love of Kettle” event.

One of the cool things is that a lot of the artists are there. I ran into David Pech, who painted the skull painting I bought last year.

Day of the Dead skull by David Pech.

The event doesn’t last too long, the art starts disappearing from the walls and moving out the door. I picked up my art and headed out – running into the artist on the sidewalk outside. I realized that I had met her before at a poetry reading for the White Rock Zine Machine at Deep Vellum Books.

I carefully lugged my assemblage  through the Saturday Night Deep Ellum crowd of drunken millennials and darting rental scooters to the train station. It’s always weird riding home late at night on the DART train with all the crackheads while cradling an artwork.

I love the piece I purchased. It’s an assemblage by Lisa Huffaker named “How We Measure Our Days.” It’s made from various pieces of mechanical and electrical equipment, lenses, and insects – decorated with gold paint. I tried taking a photo of it – but can’t really do it justice.

“How We Measure Our Days” by Lisa Huffaker 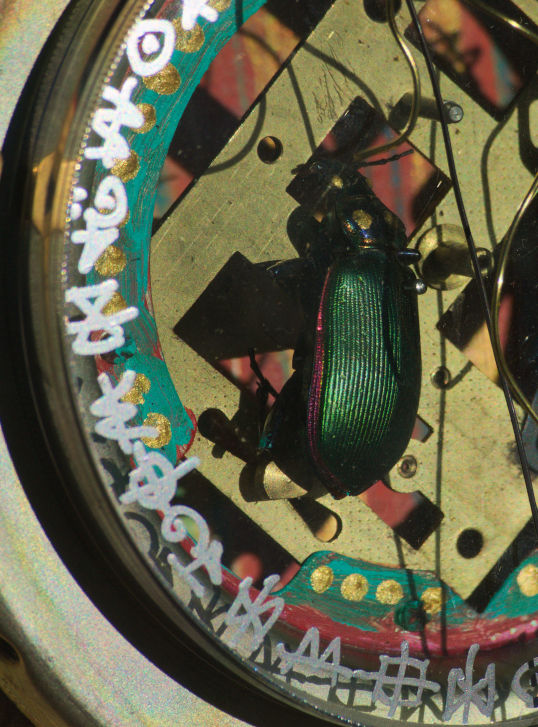 “How We Measure Our Days” by Lisa Huffaker, detail 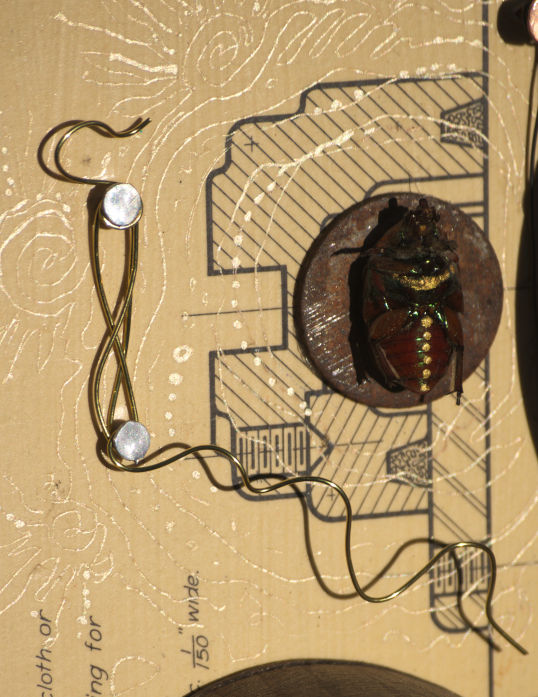 “How We Measure Our Days” by Lisa Huffaker, detail

So I smiled as I rode the Saturday late-night train back to Richardson, sitting there in the miasma of crack and weed smoke floating off the denizens slumped over in their seats. I was worried that my collection of strange items looked vaguely bomb-like – but nobody seemed to give a damn – lost in their own private disasters. There was also a healthy gaggle of families returning home from a cheerleading competition in my rail car. The DART train late at night is a weird agglomeration of groups representing wildly divergent aspects of the evil city. The cheerleaders were especially sullen and teenagery-angsty – they must have lost their competition. I, however, wasn’t. I was just happy that I had found those two twenties and one ten in that forgotten envelope and gone downtown after all.