“Ice contains no future, just the past, sealed away. As if they’re alive, everything in the world is sealed up inside, clear and distinct. Ice can preserve all kinds of things that way – cleanly, clearly. That’s the essence of ice, the role it plays.”
― Haruki Murakami, Blind Willow, Sleeping Woman 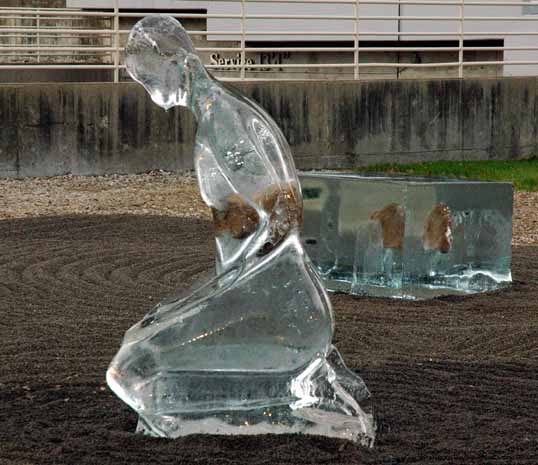 Here’s another one for today (#94) Almost There! What do you think? Any comments, criticism, insults, ideas, prompts, abuse … anything is welcome. Feel free to comment or contact me.

Ice Machine in the Desert

Chris DeLoama tried to relax and stifle a cough. A child’s soft rubber ball had been shoved into his mouth and a rectangle of duct tape held it in firmly. The bitter taste was overpowering. His arms were locked together behind his back around a wooden pole supporting the roof of the desert shack, but his feet were free. He was too exhausted to do anything more than shift his legs out in front of him – trying to keep his circulation going.

Chris was sure he couldn’t get away. He  had heard the plastic sawing sound of a big ziptie when he was put down. They had obviously done this before.

From his captive position he could see most of the interior of the shack. It was a crude circle of rough wooden posts supporting hand-hewn roof poles and vigas. Before he crossed the border a ranger has shown him a restored cabin and explained how the wooden poles were cut and arranged in a pattern to shed the rare rain and to provide shade and shelter. The restored cabin had felt surprisingly cool, but now that it was midday, this place was horribly hot.

There was an open spot in the roof in the center of the one room and a green square of nylon was suspended below this to help keep out the sun while still affording a little ventilation and light. The green gave an odd cast to everything .

There were no bulbs, though there was electricity. A thick bundle of cord came in under the wall, half-buried in the dirt floor. He had been brought here blindfolded, on a donkey, but before he was shoved in and tied up the scarf had been removed and he had a glimpse of the outside. For a hundred yards the rocky desert floor was spotted with the ubiquitous viga poles, these vertical, stuck firmly into the hardpack soil. Attached to the top of each pole was a metal and glass frame, filled with the black circles of solar panels. Every elevated panel had a thin wire running down and joining the others in the cable that ran inside.

Now Chris could see the purpose of the panels. The cables terminated in a gray metal box that emitted a low hum and a single cord ran from that into a big green metallic cabinet. It made various mechanical noises including a crystalline tumbling sound every five minutes or so. It had a chrome plated hopper in the front – an ice machine.

Near the ice machine a string hammock was hung between two poles in the ring that supported the circular opening in the center of the room. Don Juapo, the man that was in charge, as far as Chris could surmise, was stretched out in the hammock, asleep, and snoring loudly. The only thing Don Juapo was wearing was a pair of tattered boxer shorts and cowboy boots. His pile of crumpled, dusty clothes sat on the dirt nearby. He did not sleep in the hammock the long way, like Chris had seen people do back on summers in Connecticut, but at an acute angle, almost crossways. His head and feet stretched out the woven string of the simple hammock until it surrounded him like he was a huge, hairy spider on a gently swaying web.

The only other people in sight were two guards in dirty cotton t-shirts and rough jeans sitting in hard chairs spaced against the outside wall on either side of Don Juapo’s hammock. They each cradled AK-47 rifles and were quietly struggling to stay awake – every now and then slumping and almost falling out of the uncomfortable seats.

Suddenly the door to the shack opened and the girl the guards called Maria came in struggling with a large heavy bucket half-full of water. She wore the usual uniform of the rest of his captors – a sleeveless T shirt and jeans, cowboy boots, and a small straw hat – though her outfit looked relatively new and was mostly unwrinkled.

She hauled the water bucket over to the ice machine and opened the lid. Inside was a white plastic scoop and she began shoveling ice into the bucket, mixing it well and doubling its weight. She had to strain to get the bucket over to Don Juapo but neither of the guards offered to help. Don Juapo himself woke up and gestured to her to hurry up.

She sat down on a low stool beside the hammock and dipped a glass jar into the liquid, handing Don Juapo a streaming cold drink. Chris felt his eyes go wide at the sight and he was suddenly excruciatingly aware of his own thirst. Without comment, Don Juapo accepted the water and began to gulp it down. Maria then dipped a small hand towel into the cold liquid and placed it on Don Juapo’s chest. She gently rubbed the towel over him, until he finished his water and took the towel in his own hands. He would move the cool liquid over himself – first his chest, then his face and arms, and finally his legs – until it was heated from his own skin, then hand it back to Maria for a fresh dip of cold water.

Chris could only squirm and watch.

Finally, he had cooled off enough until he dropped the towel and stretched back out in the hammock. Maria didn’t leave – she stayed sitting silently on the stool. Don Juapo reached into the bucket and pulled out a single crystal rock of ice and slowly moved it over Maria’s exposed skin – around her neck, over her shoulders, and inside the folds of her collarbone. The cold water would bead up and run down under her shirt, staining it in a brutal battle between the melting ice and the evaporating heat. When a cube completely melted, Don Juapo would reach back to the bucket and select another.

Chris realized that, although Don Juapo was facing away from him in the hammock, still gently swaying, his arm extended to move the ice over Maria, she was staring directly at him. She sat stock still, allowing Don Juapo to move the ice, not showing any indication of embarrassment or pleasure, with her eyes firmly locked on Chris’.

After a period of time – Chris couldn’t guess if it was a minute or an hour – Don Juapo’s arm fell lifeless and a tiny sliver of ice tumbled into the dust. He began to snore again. Maria stood up and scooped up another jar of ice water and walked over to Chris. She held the cold glass against the duck tape, letting the water on the outside loosen the adhesive, until she pulled it off. Chris spit the ball out and sucked the water down as Maria held the glass up to his mouth, tilting it as he drank. She returned to the bucket for a second and third jar full, until Chris grunted that he was sated.

He had not taken his eyes off of Maria since she had brought him the water, but a rough noise from the center of the room caught his attention. Don Juapo was awake and out of the hammock. He was bent over pulling on his loose pants over his boots.

“That’s enough Maria,” he said. Then he gestured to one of the guards, “Cut his bonds and bring him to me in my cabin, I want to talk to him.”

The guard approached with a large machete and used a confident and violent single stroke to chop the plastic tie between Chris’ hands. Chris let out a moan of pain as both legs cramped when the guard pulled him to his feet.

“You come too, Maria,” Don Juapo said as he strode quickly toward the door of the shack.

“And don’t forget your bucket.”