“Remain in the world, act in the world, do whatsoever is needful, and yet remain transcendental, aloof, detached, a lotus flower in the pond.”
― Osho, The Secret of Secrets

There are these ponds in the park at the end of my block. I think they are mostly there for flood control, but they look great. I’ve taken photos of them over the years.

Pond at the end of my block, Huffhines Park, Richardson, Texas

The ponds at the end of my block, Richardson, Texas 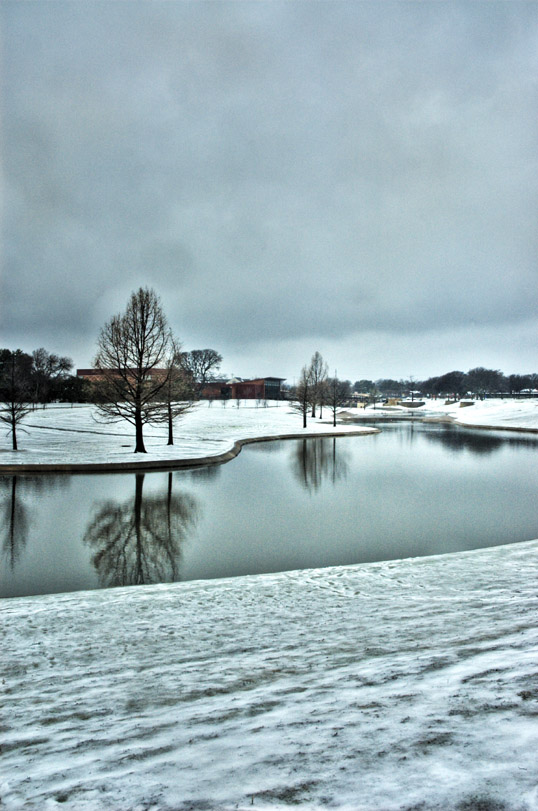 The ponds at the end of my street,
Huffhines Park,
Richardson, Texas

Men Between the Ponds

The ponds are surrounded by hiking/biking trails – it’s on my work bicycling commute. I always enjoy riding past or around the ponds – except on the days/times that the trail is too crowded.

Not too long ago, I noticed a guy sitting by the pond watching his black lab out in the water. The dog wasn’t far from shore – but still the water barely came up to his dog knees. That’s when I realized the ponds are a lot shallower than they look. They must be silted full.

Sure enough, a couple weeks ago, as I rode to work, I noticed an orange temporary fence around the pond and machines installing huge sheets of plywood, making a road to the water’s edge on the other side of the pond. Then, some workers started visiting the pond all day and night, using big portable pumps to empty the water out.

Then came in the giant shovel machines to scoop out the black muck. It was so vile and watery they had to lime it and then stir the mix with the long arms of the shovel buckets to stabilize it enough to scoop it into waiting trucks. The smell was awful – that mud had a lot of grass clippings, trash, and who knows what mixed with it and it had been sitting down there underwater for years.

One day there was an elderly woman sitting on a bench with her tiny dog held in her lap. They both were watching the machines work – unbothered by the smell of the muck and the diesel fumes from the straining engines. Everybody else seemed to be ignoring the scene.

Finally, they seem to have finished. I wondered what the bottom of the ponds would be like – they were too  big to be concrete lined. I forgot that there is caliche limestone only a few feet below the surface (that’s why nobody in Dallas has a basement) and it looks like they scooped some of the rock out (it isn’t very strong) when they made the ponds – making big oval saucer-shaped indentations in the earth.

The equipment is being loaded up – I guess they will start letting the ponds fill in now. The calendar says fall – but it’s still summer here in Texas – not sure how long until we get enough rain… we’ll see. When they are filled I guess they will look exactly the same as they did before. Deep water looks just like shallow.

The drained and scooped pond at Huffhines Park. 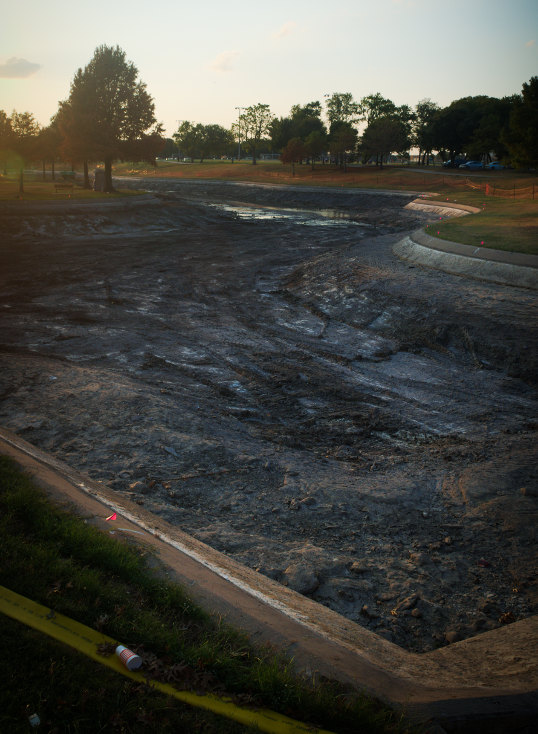 The caliche limestone at the bottom of the pond. Huffhines park, Richardson, Texas.