I like to use light as a material, but my medium is actually perception. I want you to sense yourself sensing – to see yourself seeing.

A long time ago(2004) , in a previous incarnation of a blog, I wrote about a trip Lee and I took to the newly opened Nasher Sculpture Center. The blog entry was eventually published in a local magazine. A highlight of the visit was my discovery of James Turrell’s work, Tending (blue). 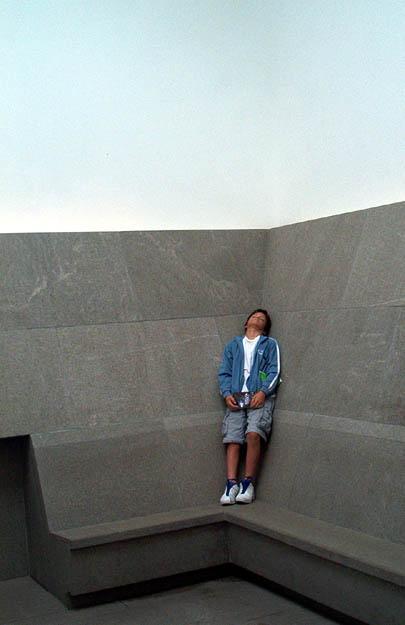 From the blog (I have quoted this twice before):

My favorite piece might have been the installation Tending (Blue) by James Turrell. We walked into a little opening lit by odd, shifting colors into the wall at the north end of the garden. The passage made a right turn and opened into a small room lined with dark stone benches. The walls on the upper half were featureless and smooth. A gray skylight lighted the whole chamber. The effect was strange and very peaceful. I liked it a lot.

Lee and I left the chamber and walked back up the garden and inside the building. We wandered downstairs and into the auditorium where a film was showing. It told the story of Raymond Nasher and his late wife, how they started out building Northpark Mall, acquired a fortune, and then became premiere collectors of modern sculpture. Mr. Nasher talked about his life, his wife, and his passion for the new sculpture center. The film then showed the construction of the center, how a handful of visionary architects and a few thousand men in hard hats converted a grimy downtown parking lot (I’ve parked there many times, put my quarters or dollar bills into a rusty numbered slot) into a thing of great value and beauty. They talked a lot of how it will be there forever. The film was fun and interesting – it really helped me appreciate the place.

On opening day Raymond Nasher said, “I put Patsy (his wife, the collector, who had passed away a couple years before) in charge of the weather today, and, as you can see, it’s beautiful.

One thing was odd, though. On the part of the film that covered opening day, Nasher and Turrell themselves went into the Tending (Blue) chamber that Lee and I had walked out of only minutes before. The benefactor and the artist sat on the benches and looked around. The skylight rectangle in the ceiling wasn’t gray like we saw it, but a deep cerulean blue.

We hiked back down and entered the chamber again. The skylight was still gray. Something didn’t look right, though. I stood under it, looking up, trying to figure out what I was seeing and how it could change colors so dramatically. I was halfway convinced that it was a rectangle of light projected on the ceiling by some hidden apparatus (the upper walls are washed in subtle changing color from hidden computer controlled LED’s) when I was suddenly struck between the eyes with a big, cold drop of water. I wiped my face in surprise and looked down at some small pools of water at my feet.

I looked back up, trying to find the telltale discoloration of a water leak, when, with a sudden shock, I realized what the hell I was actually looking at. That wasn’t a skylight, that wasn’t a projected rectangle at all, it was simply a big hole in the ceiling. I was looking directly at the sky. Once my eyes and my brain were in sync I could see the subtle variation of the clouds passing by overhead. The edges of the hole must have been cut back like razors – there was no visible frame around the opening, simply a featureless rectangle of light. It was amazing.

That’s why the rectangle looked blue in the film – it was a cloudless day. Now I want to go back. I want to go at sunset… I want to figure out how to go at dawn. The city sky at night… will it be brown? I want to sit in there during a rainstorm. I especially want to go there on that rarest of Texas days, a snowstorm.

The opening in the ceiling of the installation Tending (blue). A photograph does not do justice.

I returned to the piece many times. It became my favorite place. Then… horrors.

It was destroyed by the construction of an uber-expensive condominium tower. The controversy still rages today. 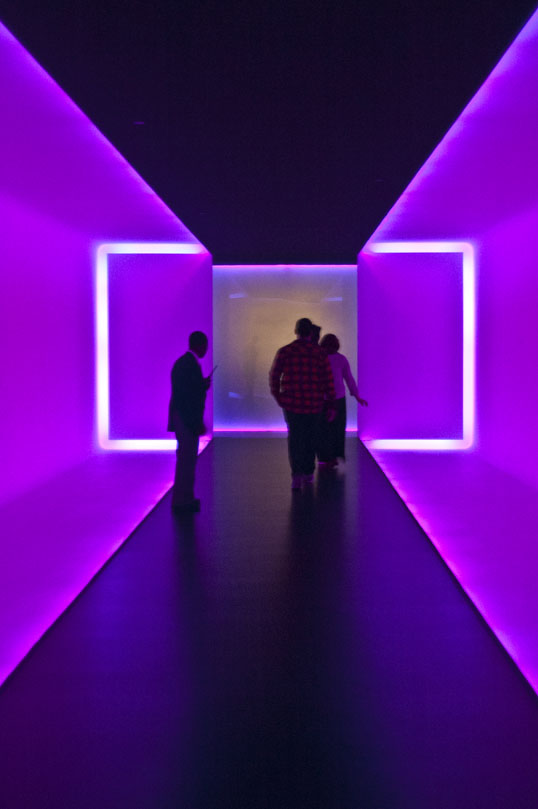 But I remained a fan of James Turrell. Especially when I found out about Roden Crater.

Imagine a hollowed out dead volcano in the desolation of Arizona filled with Turrell’s work with light. Amazing.

It is one of the things I want to visit before I die. I was losing hope, however. The idiosyncratic artist was taking forever and only a handful of people (each making tens of thousands of dollars worth of donations) were being allowed to visit. That doesn’t… and never will… include me.

But I kept watching… digitally. And today an article came across my screen. Turrell has partnered with Arizona State University to finish the project and open it up to the public. I’m stoked.

As much as I dislike the image of the isolated volcano surrounded by ugly parking lots – gift shop selling doodads and geegaws and rubber tomahawks – crowds of gawking tourists griping about the heat – tour buses idling to keep their air conditioning running disgorging their cargo wearing “I’M WITH STUPID” T-shirts into snaking queues of people staring at their phones…. All of that would be worth it if it allows one person (me) to actually visit Roden Crater.

Now that I think about it there are three artistic creations I’ve know about for a long time and hope to live long enough to see finished.

1. When I was a little kid I read about the Crazy Horse Memorial Monument and fantasized about seeing the gigantic sculpture, probably as an old man.

Well, I don’t think I’m going to make that one – it doesn’t look like it has changed much since I was a kid. The other two, though:

2. The Sagrada Familia in Barcelona… they have picked up the pace the last couple of decades… I might make that one.

3. An now there is hope for Roden Crater. This is truly the best of all possible worlds.