“The Greek word for “return” is nostos. Algos means “suffering.” So nostalgia is the suffering caused by an unappeased yearning to return.” 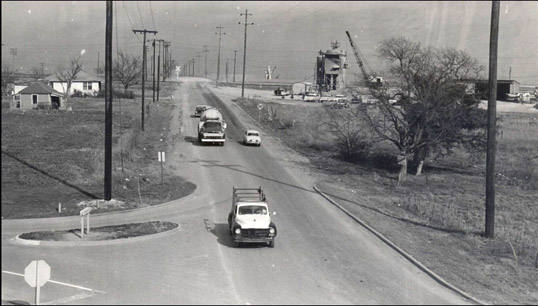 I belong to a Facebook group on the history of the city I live in, Richardson, Texas. Today, the library posted this photo and another from a slightly different angle with a request that someone identify where it was taken. It was labeled, “Arapaho, 1958.” It didn’t take long for the readers to identify the exact location of the top of the US 75 overpass, facing east, along Arapaho road. Everyone was fairly sure that the highway was under construction at the time (probably using concrete from that batch plant), so somebody simply climbed up on the deserted, half-built bridge and took some shots that ended up in the library archive.

Out of curiosity, I went to Google Maps Streetview and captured a contemporary image of the same place.

It definitely the same place. In the original, you can see the railroad crossing in the distance – that is now the overhead DART commuter train line you see in the modern photo. The angle is different – the overhead Highway 75 is too busy to take photos from and all the Google Maps Streetview shows in the high concrete guardwall.

Things have certainly changed… in not all that much time, really. I was one year old in 1958.

What is interesting to me is not what has changed… but what is still the same. Of course, 75 and Arapaho has changed a lot – but that is because the city has grown to overtake that quiet little country corner. Dallas has grown at an incredible rate – faster than most cities – an the sprawl has vomited out across the cotton fields, especially to the north, for decades and decades now.

But, you see, the central part of the country, from Texas to North Dakota, flyover country, the part of the country I have lived in a lot – still looks largely like that first photography. A rough, rural intersection, a small concrete batch plant, tumbledown wooden shacks, a lonely armless and warningless railroad crossing, pickup trucks, sedans, a concrete truck leaving the batch plant, scraggly trees with a crude advertisement nailed to it struggling against the wind, summer heat, winter snows, lines of telephone poles marching regularly over the curve of the earth, fertile land flat as a pancake.

There are still millions of places like that all up and down the heartland. A lot have been gobbled up by the city… but there are plenty more out there.