“I have always imagined that Paradise will be a kind of library.”
― Jorge Luis Borges

Everyone has their own addictions. One key to a happy and successful life is to choose your addictions wisely, and manage them well.

One of my addictions, one that I am managing, is owning books – especially used books. The depth of my addiction was when we lived in Mesquite – our house had a long, L-shaped hallway that was unusually wide. It was wide enough for me to cover the walls with bookshelves and then fill those with books – mostly bought on clearance from Half-Price. You can only read so many books – you only have a limited time on this earth (and so much of it is wasted at work and such) and your reading speed is finite. You can, especially if you buy used, own a practically unlimited number. I know this sounds nuts – but that is how an addict thinks.

When we moved, the movers went ape-shit over the books. “We have never seen so many books before,” they complained and said it would cost us more than their estimate to move us. So, here, in Richardson I limit myself to two full-sized bookcases and one small one (which holds exclusively writing books). If I get a new book, I get rid of an old book. Now the fact that I have… probably a score of bookcases-worth of tomes stored electronically in my Kindle… that doesn’t count, even though I doubt I will live long enough to read a fraction of them.

So now, I’m remodeling my room (once a formal dining room, then, for years basically a disco and LAN party room set up by Lee – now I have inherited it) with a new desk and a compact sound system. I was trying to figure out where to put the “bookshelf speakers” and decided that they should go on a bookshelf. So I had to remove a few tomes and went ahead and cleared out some space for some new purchases I have been contemplating… and then had a few cardboard boxes full of old books (it’s surprising how much weight and space books take up once liberated from their shelves).

I don’t know about you, but I simply can’t throw books in the trash. Odd thing really… but I can’t. Usually we cart old books to Half-Price, though we don’t really get any money for them (especially when you figure most of them were bought there from the Clearance racks). Then I remembered something I always see riding my bike around.

I’m sure you’ve seen these too – the Little Free Libraries. They are… if not everywhere, at least a lot of places. People build a sturdy little glass-faced box in their front yards, accessible from the public thoroughfare for people to “take a book or leave a book.” There are five near my house with another baker’s dozen within cycling range. What a cool idea!

Dallas, in its infinite wisdom, proposed regulating these, until they realized that was nuts. Reading these stories I love one quote. Apparently the whole brouhaha was started by one asshat repeatedly calling to bitch about his neighbor’s library until the city stall jumped on it.

“Well, for all you kids listening at home, if anyone ever tells you one person can’t make a difference,” said East Dallas’ Philip Kingston, “remember one jerk using 311 in District 10 caused us all to waste our time here and caused the loss of hundreds of staff hours.”

So, today, I set out on my usual bike ride. Because of the torrents of rain over the last few days I rode my commuter/cargo bike – it is as heavy as a tank, but has fenders that make standing water and mud less of a pain. I have a set of Bushwhacker Omaha folding grocery panniers which make quick trips for food easy (I have six grocery stores with a two mile bike ride of my house). Once I put up the groceries I refilled the panniers with surplus books and headed out to a few close by Little Free Libraries.

I’m especially proud of the fact that I didn’t take any books (though I did look). Is that selfish of me? I’m feeding someone else’s addiction while I’m dealing with mine. 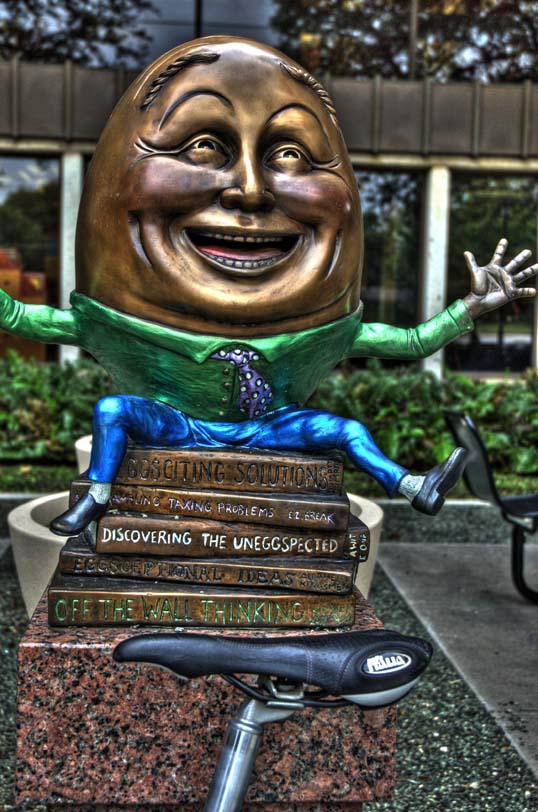 The sculpture in the outdoor reading area at the library.

7 responses to “A Kind Of Library”