“Great artists make the roads; good teachers and good companions can point them out. But there ain’t no free rides, baby. No hitchhiking. And if you want to strike out in any new direction — you go alone. With a machete in your hand and the fear of God in your heart.”
― Ursula K. Le Guin, The Language of the Night: Essays on Fantasy and Science Fiction 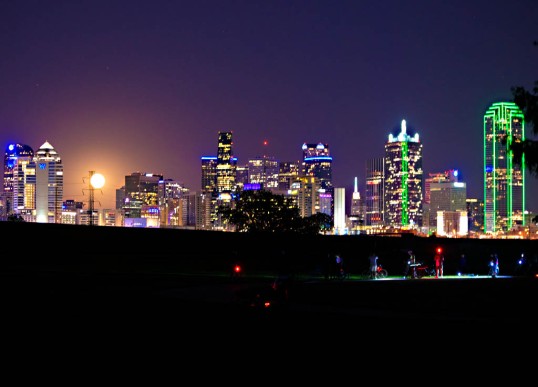 The moon rising over cyclists and the Dallas skyline. From the October Full Moon Ride. (click to enlarge)

Oblique Strategy: Assemble some of the elements in a group and treat the group

The moon rising over the Dallas skyline and the pond at Trammell Crow Park. From the October Full Moon Ride.

My Cannondale road bike at Trammell Crow Park. From an early part of the October Full Moon Ride.

There is a monthly bike ride held at dusk on the first day of each full moon. It starts in a park in Downtown Dallas and heads out into the wilds of the Trinity River Bottoms where we can watch the moon rise over the city.

I had a blast on the October ride and was looking forward to the next one. It was a little more ambitious. We would head out on the gravel roads that line the levees along the river. Because of the crushed rock, I wouldn’t be able to ride my vintage Cannondale and would have to use my heavy, fat-tired commuter/cargo bike. 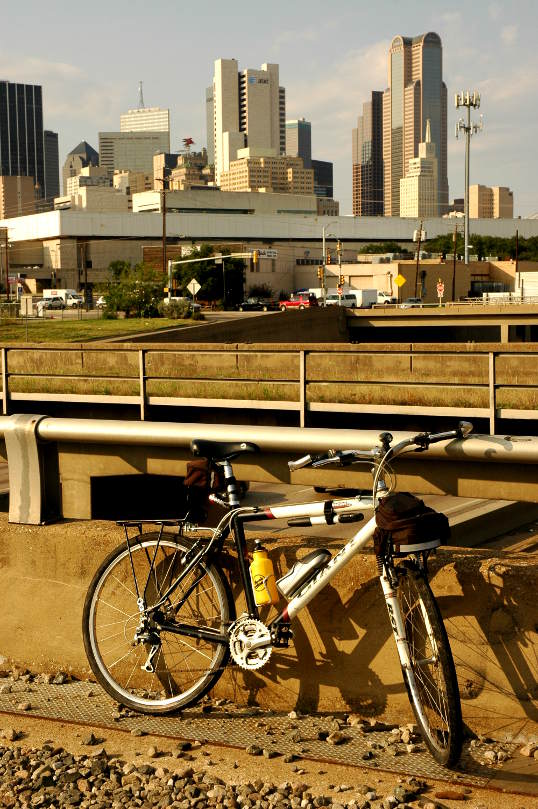 My heavy Commuter Bike with Dallas skyline in the background

We would ride ten miles to an abandoned golf course where we would have a campfire and make s’mores before riding back. I was a bit concerned – twenty miles, much of it off-road, is a long way for me to ride on my heavy, thick tired repurposed mountain bike. Despite all my despirte fanfaronade I am the world’s slowest bicycle rider, especially on an inefficient vehicle. Even riding the best of bicycles – the engine is old and worn out.

I rode the DART train downtown, as the sun was setting, met up with about a dozen folks, and set out. The gravel wasn’t too bad, but it was jarring and a job to control the handlebars, especially in the dark. I have a good headlight on my bike and the world was reduced to a pool of small rocks moving toward me while all around was invisible, inky blackness. It was fun. I slowed to the back of the pack and realized that if I cut my speed a little bit the ride became smoother.

The gravel road in the Trinity River Bottoms
(click to enlarge)

So, I was slow, but not too much. There is a bridge about every mile through the river bottoms and we would stop so everyone could catch up. We made our destination on time, and the s’mores were delicious.

The only hitch was that I didn’t get any photos. I had brought my camera, a small Gorillapod, and a remote shutter release. I spent too much time having fun, and had to rush setting up my camera. I put the tripod on an old air conditioning unit, and before I could shoot, the release fob slipped out of my hand and disappeared inside. I took that as an omen, and packed it all back up.

We rode concrete back – by then the traffic was light. Only when we neared the American Airlines Center (the Dallas Stars were playing hockey and the game let out at the same time we passed) did we run into angry, aggressive drivers.

So, now I’m looking forward to next month. I need to put my nighttime photographic, time exposure kit together and practice, so I’ll be ready.