Beauty is in the eye of the beer holder.
—-Kinky Friedman

Deep Ellum, then and now.

I am old enough and have lived in Dallas long enough to have seen Deep Ellum rise, fall, and now rise again. When I first moved here in 1981 it was an urban industrial wasteland – known only for cheap space for marginal businesses.

Yet, even then, the neighborhood had a long and famous history. The music from the 1920’s, lead by Blind Lemon Jefferson, Huddie “Leadbelly” Ledbetter, Texas Bill Day and Bessie Smith paved the way for modern jazz, blues, and rock and roll as much as any other place. But in 1969 a giant elevated freeway choked off the urban oxygen and the vibrant area fell into decay.

Then in the 1980’s fueled by cheap funky space and the punk revolution in music Deep Ellum regained its reputation as a spawning ground for music and nightlife. I was there for that – and it was something.

But again, the city zoning laws, rising crime, and the fact that the wealthy edge of the city was vomiting out over the cotton fields over an hour north threw Deep Ellum back into disrespect and disrepair.

Now, though, the population is moving back in and Deep Ellum is coming back with a vengeance. This time it is different, the rebirth is fueled by people actually living in and around the area. This time it feels like it might last.

The last Friday of the month is Dallas Critical Mass. I always enjoy these, a lot, even though it took all my will power to get my stuff together and catch a train downtown – work wore me out so much, the siren song of the couch was almost irresistible. This is a rare sweet spot in Dallas weather – and a big group showed up in the park for the ride. One of the fun things about the Critical Mass Ride is that nobody knows where it is going. This month we wound around downtown, then headed out Main Street through Deep Ellum.

When we crossed Exposition the bicyclists were clumping up in a big group right in the middle of the street, and I realized we had reached our destination. It was the Cold Beer Company – a new bar/restaurant/place to hang out on the edge of Deep Ellum.

I realized that I had seen this little building before, and had even photographed it and posted a blog entry. It was once the rundown and abandoned spot that used to hold Vern’s Kitchen until it closed in 2009. I liked the place, even with the broken windows and graffiti, but didn’t think that Deep Ellum would grow enough to resurrect a business on such a wayward spot.

I was wrong. We stayed at the Cold Beer Company for a couple of cold beers (Peticolas Velvet Hammer to be exact) and I pronounce the location to be back and back for the better. The room is small, but they have done a great job with their patio and garden areas. They even have a cool custom bike rack out in front. 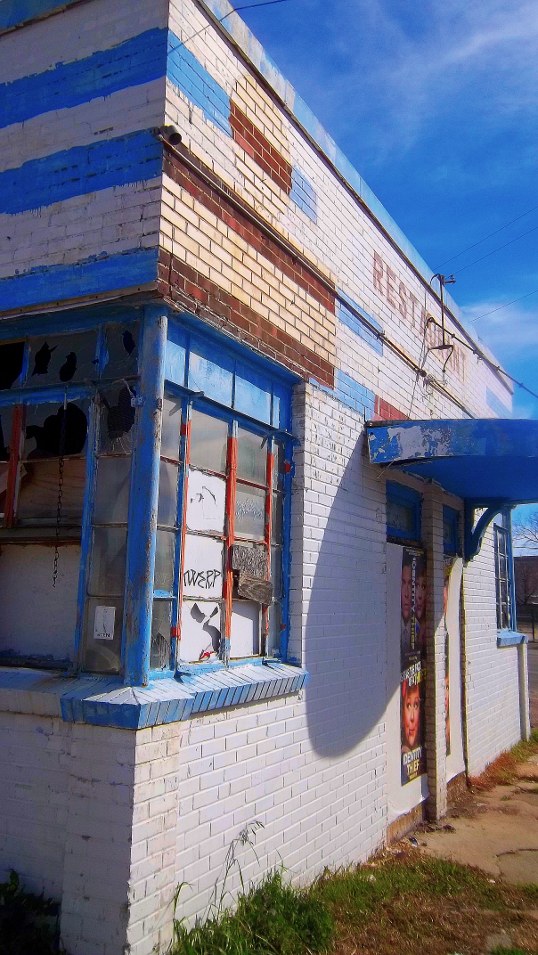 The building that would become The Cold Beer Company, in March of 2013

The Cold Beer Company today… from about the same angle.