This is day Twenty-four of my Month of Short Stories – a story a day for June. 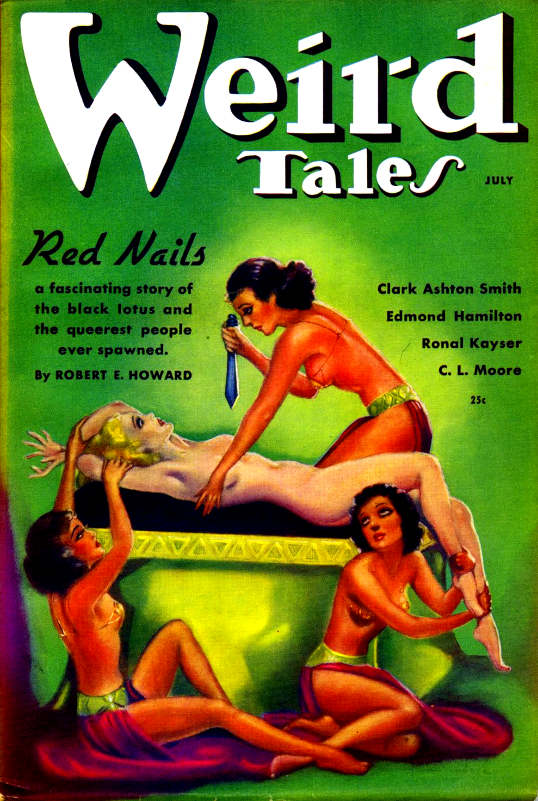 Nearly four years ago, WEIRD TALES published a story called “The Phoenix on the Sword,” built around a barbarian adventurer named Conan, who had become king of a country by sheer force of valor and brute strength. The author of that story was Robert E. Howard, who was already a favorite with the readers of this magazine for his stories of Solomon Kane, the dour English Puritan and redresser of wrongs. The stories about Conan were speedily acclaimed by our readers, and the barbarian’s weird adventures became immensely popular. The story presented herewith is one of the most powerful and eery weird tales yet written about Conan. We commend this story to you, for we know you will enjoy it through and through.
—-From Weird Tales, 1936

A dozen years ago, in February of 2001, I had just finished up a solo camping trip to Big Bend way out in far west Texas. I had a long drive back to the Metroplex, one I had made before. This time, however, I had picked a different route back, one that was slightly longer than usual.

Instead of going north to Interstate 20 and taking it back, I caught 67 through San Angelo and on to Brownwood, then north to the little hamlet of Cross Plains. Once I made it to that small town, I followed a little map that I had scribbled to a tiny house on the west side of town. I stopped, looked at the nondescript wood frame dwelling for a minute, then went back to my car and drove the rest of the way home.

I had wanted to see that house because of the person that lived in it in the 1930s – it was the childhood home, and the place he committed suicide, of Robert E Howard. Even though it looked exactly like a million other old farmhouses all across the Great Plains – I wanted to see this one… to see it, and nothing more.

Like anyone that has been a voracious reader for almost half a century now, I have read my fair share of pulp. Mostly devoured in the form of cheap paperback reprints, I was familiar with Conan, and with Robert E Howard… along with the other writers of depression-era fantastic, gothic, and strange tales – plus their imitators that have continued the tradition still.

But the specific incident that lead me to my stop in Cross Plains had occurred on a cult movie night at the Dallas Museum of Art. I had seen that they were showing a film I had never seen before – The Whole Wide World – an elegiac story of Robert E Howard (played by Vincent D’Onofrio) and his relationship with a girl named Novalyne Price (Renée Zellweger, in one of her first roles).

It was an amazing film and one that almost nobody had seen. It was so representative of the writing life, the desire for creativity and expression, the sad doomed love story, and the insane dreamer pounding out madness for pennies a word. Even the evocation of rural Texas in the depression felt true and fascinating. The representative from the distribution company came out and thanked everyone for seeing it – he said, “We are so proud of this movie and want as many folks as possible to see the film.” Now it’s more available… you should take a look.

I found out that it was based on a memoir by Novalene Price – called One Who Walked Alone – which hadn’t sold many copies. I ordered it from Amazon and (though it really wasn’t particularly well-written) enjoyed it thoroughly.

So here’s a pulp novella from Robert E Howard, Red Nails. Don’t think of Arnold and his movie when you read it… think of the doomed crazy boy hammering away in the back of that little farm house in that little town in Texas… fighting back his demons the only way he can – with a typewriter.

He lifted quivering hands on high, and then, with the face of a fiend, he spat on the corpses and stamped on their faces, dancing in his ghoulish glee. His recent allies eyed him in amazement, and Conan asked, in the Aquilonian tongue: “Who is this madman?”

“He says his name’s Techotl. From his babblings I gather that his people live at one end of this crazy city, and these others at the other end. Maybe we’d better go with him. He seems friendly, and it’s easy to see that the other clan isn’t.”