The Super Bowl has become one of the biggest holidays of the year in the states. It doesn’t matter that it isn’t an official government edict, that it has no religious status – not even some ancient pagan ancestor, or that it is usually a pretty crappy football game that only people in the two cities involved really cares about. It is a reason to go to someone’s house, gather ’round the big screen, and eat yourself into oblivion.

This year we were invited over and told to bring sliders of our own design. At first, I was not too excited. I am not a football fan (college basketball is my sport of choice – I went to Kansas and my son goes to Duke) and I didn’t relish a wasted day of boring sports and overindulgence. I started to think about things and try to make the best of it. There was some serious cooking skills at this place (professional caterers, graduates of chef school, people from Louisiana) and I decided to go for it and make an effort at putting together some original sliders.

If you don’t know, sliders are small hamburgers, originally from the White Castle chain. They have gone beyond those simple (but good) tiny versions of the All American Burger. Recently, I have been to a couple of food trucks – Easy Slider and The Butcher’s Son for example – that raised the bar on the creativity of sliderdom.

So I sat down with a sheet of notebook paper and worked out three different versions of sliders – two fairly pedestrian ones and one that was a bit more exotic.

First, BLT sliders. Simple – bacon, lettuce, and tomato on a roll with a little mayo. Easy and foolproof.

Then, for a second slider, I went for a Blu Cheese slider. Sliced sausage with blu cheese coleslaw and blu cheese crumbles on top.

Finally, with a little trepidation I designed a Korean slider. Pork Bar-b-que with caramelized kimchi. Soy sauce and Sriacha on the bun for a spicy kick. I still had a bunch of kimchi left over from my trip to Super H Mart. I ground some up in a food processor and sauteed it with some brown sugar (caramelized kimchi).

So I made a trip to the store and then set up an assembly line on the kitchen counter. The nice thing about sliders is that you can make a boatload of ’em without too many raw materials. There isn’t much in each little thing.

So we headed over and I lugged my trays of sliders into the house. The BLT and Blu Cheese were fine cold, but I heated the Korean sliders up in the oven. The first two disappeared immediately. I didn’t even get to try any myself, they were gone as soon as I set them out. The Korean sliders weren’t such a big hit. They were too spicy for most folks’ taste – but the more adventuresome eaters seemed to like them. I thought they were good – but I’m used to kimchi and spicy stuff.

I guess I had a good time, though we stayed too long and I ate way too much. I remember looking at a plate where I had stuck a few jalepeno peppers wrapped in bacon and thought, “I should not eat these. I’m already full and if I do it will make me sick.” I did and they did.

There was some point in the game where I think the announcer said, “And on that play Brady had no choice except to eat the football.” I know how he felt. I felt like I had eaten a football.

It even killed the next day. I walked around in a haze, dehydrated and worn out from the effort of digesting all that food.

So I swear I will never do that again. I’ll have to read this again to remind myself before next year’s Superbowl. 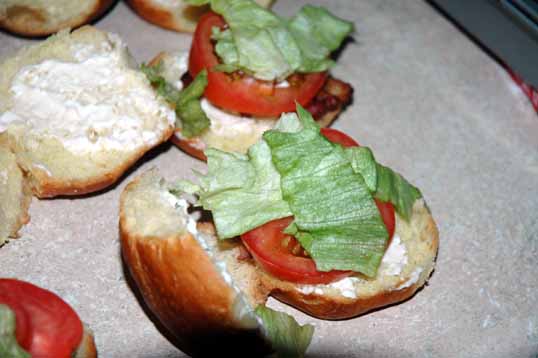 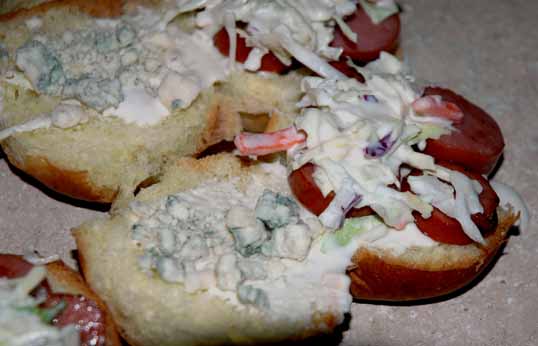 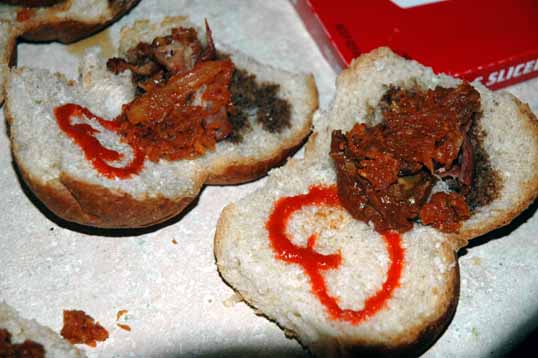 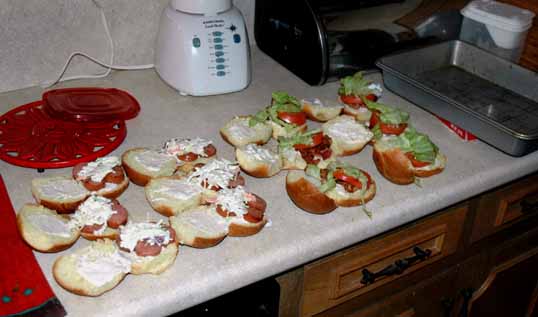 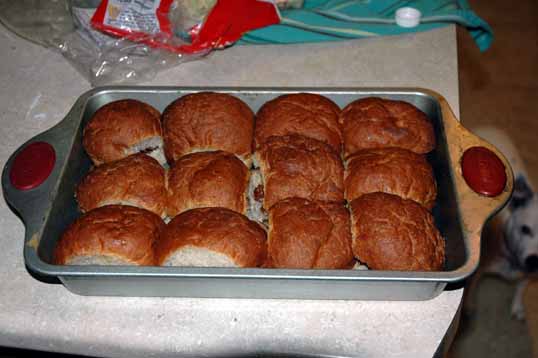 One nice thing about sliders - they are easy to transport