The last few weeks, whenever I would sit down at the computer – dipping my toes in the very shallow edge of the warm and wild sea of the internet – looking for youtube videos of old and tacky musical performances – I kept coming across the word “Scopitone.” A lot of musical chintz, commercial pop from the early sixties, especially stuff from Europe…

Some of the best (and worst) of it had the word Scopitone floating above the tawdry grin and shabby outfits, grainy film-transfer, inane and incongruous background singers, and abysmal dance routines. I assumed that Scopitone was a brand, or a record label, or something else rooted in the second-rate musical world of the time. I was right about that, I guess, but it wasn’t until a few days ago that I stumbled across what Scopitone actually is.

It is a machine. A musical video jukebox of the time. MTV for the sixties. An Ipod of the day, the size of a refrigerator.

A Scopitone is a way to pay to view sixteen millimeter films of the stars of the day. The short musical films were stored on reels inside the complex mechanism and delivered up for view on a dark, dim, blurry screen atop the contraption while the sounds, carried on an innovative magnetic track beside the filmstrip, bellowed out of tinny, static-filled speakers. 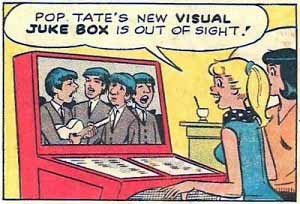 The Scopitone was developed in France after World War II. The story is that two French engineers built the prototype projector from a 16mm aerial spy camera and used other leftover war equipment for the mechanism. It was very complex and wasn’t perfected until the late 1950’s. I can’t imagine the difficulty of building a mechanism to automatically thread and rewind a pile of 16mm film reels, all in a portable machine the size of a refrigerator.

The interior mechanism of a Scopitone

The machines were mostly placed in loud, noisy, crowded bars full of desperate drunken young men. That is why so many feature skimpy outfits on skinny starlets, shimmying whatever it is that they’ve got for the three minutes or so the song spends wearing itself out.

The only thing stranger that the short success of the Scopitone is the fact that these films are still around today. You can buy DVDs. There are blogs dedicated to them. I can go online, type Scopitone into the youtube search field and my screen fills with a list of hundreds of these ancient artifacts. Is it stranger that they are available… or that I actually like to look at them, or even write about them.

This is actually a great song. But why are they singing to a bear?

This one is straight from a burlesque show… and I remember the Dean Martin James Bond spoof of the same name. Did the song come first?

Have to have one with dancers wearing fringed bikinis.

This is the most heartfelt song I’ve ever seen that involved women in bikinis playing skee-ball. “Hey Kids! Play with Peppy”

Always had a soft spot for instrumental “twist” music.

And of course, Bang Bang