Jenni Whitlock:
Eric, when you found me, what else was there?

Eric Whitlock:
What do you mean, ‘What else?’

—-from The Screaming Skull

As I learn to adjust to a life without cable television, I explored the nether regions of the hundreds of free streaming channels available on the Roku. I haven’t researched it – but it looks like anyone can cobble their own Roku channel together – and there are lots of them. Unfortunately (but unsurprisingly) these are mostly poorly done and colossal time sucks.

I did stumble across a collection of old, bad, out-of-copyright horror films. These always bring back memories of when I was in sixth grade or so and discovered what that odd round wire antenna-thing that came in the box with new televisions was used for. I had discovered the UHF channels that my parents knew nothing about. I would crawl out of bed after the family was asleep and creep into the darkened kitchen and tune in what I could find on the little portable TV. This included channels dedicated at night to grade Z horror films.

Now, a half-century later, I like to look for these horrid memories from long ago. I thought I remembered one called The Screaming Skull and chose it. Turn’s out I had never seen it – and my life isn’t enriched by seeing it now.

I’m not going to review The Screaming Skull… take my word for it – it’s bad.

You know it’s bad from the first scene… a cheap plastic skull rises from a bucket of water bubbling with dry ice and you get:

Narrator:
“The Screaming Skull” is a motion picture that reaches its climax in shocking horror. It’s impact is so terrifying that it may have an unforeseen effect. It may *kill* you! Therefore it’s  producers feel they must assure free burial services to anyone that dies of fright while seeing The Screaming Skull.

I’m sure they didn’t have to pay out… ever. The movie is simply not scary.

The only good thing is that the main character, despite being poor, drives a seriously cool car, a mid-’50s Mercedes-Benz 190SL Gullwing. The movie brightens every time this car appears. I would love to learn the story about how such an exquisite expensive hunk of steel made in into such a low-budget film. 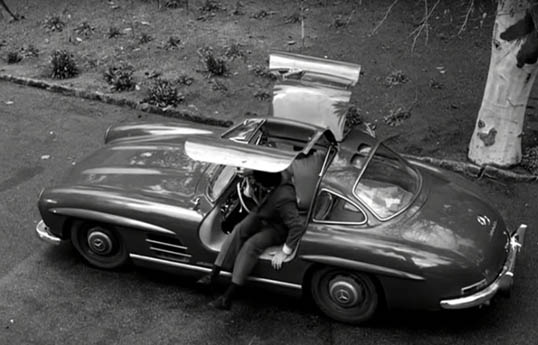 Mercedes-Benz 190SL from The Screaming Skull

And that’s about it. All the rest sucks.

Looking up information on the film – I didn’t realize that it was satirized on Mystery Science Theater 3000. Going to have to watch that… when I have a lot of free time.

Oh, and it is very loosely based on a short story. I found it online here. Not sure if the story is any better than the film….