“Game shows are designed to make us feel better about the random, useless facts that are all we have left of our education.”

As I committed the other day I am doing Nanowrimo – the National Novel Writing Month this November – writing a 50,000 word (small) novel in a month. Not necessary a good novel, or even a readable novel, but one of 50K words.

Didn’t know if I could get anything written today. I was extremely tired after work, but took a nap and sat at my writing machine and hammered out a bit more than my daily goal.

Wasn’t sure what to write, so I typed out some dialog between two characters sitting in a hotel room. I find that random dialog is a good way to fill out word counts, simply imagine the two characters in some normal (or not-so-normal) situation and think what they would say to each other. It isn’t Tarantino quality dialog, but eventually you discover the personalities of the characters and sometimes they say something interesting, sometimes they say something unexpected. I started with them looking at the television in a cheap hotel room and talking about the game show that is on.

Snippet of what I wrote:

“What show is that?” asked Bernard.

“No, I know there is no point in us watching. I mean what’s the point of the game? What are all those idiots doing?”

“That guy picks one of those old biddies and then the woman tries to guess how much shit costs and if they get close enough they get to take it home.”

“Man, that’s lame. I guess those old women have spent their whole life buying shit and must know a lot about how much it costs. Hey, what’s to keep them from looking it up on Amazon… like from their phones?”

“I don’t think they would allow that. Besides it’s MSRP… ‘Manufacturer’s Suggested Retail Price.’ I think Amazon sells it cheaper, so that wouldn’t help much. It’s a real ripoff anyway. The companies’ give the crap to the show for free, for advertising, so it doesn’t cost them squat – they’re giving away free shit. Plus the poor saps that win it have to pay income tax. They have to pay to take away a bunch of free crap they never wanted in the first place.”

“Are you sure? That seems really stupid.”

“Yeah I’m sure. And it is really stupid.”

“I don’t usually, but there’s nothing else. Besides it makes me feel better. I may be a hopeless loser, but at least I’m not as bad as all those dumb assholes.”

“Hey, that guy doesn’t look right. I remember my mom watching this, isn’t that guy supposed to be Monte Hall?”

“No, Monte Hall was on ‘Let’s Make a Deal,’ another show… though it’s kinda like this one. You’re thinking about Bob Barker, and he’s not on it anymore. That guy’s Drew Carey.”

“Bob Barker? Yeah… I remember. Didn’t he get in a fight with that actor dude… Sandler? Adam Sandler?”

“Bob Barker and Adam Sandler? No, they were in a fight in that golf movie, ‘Happy Gilmore,’ but not in real life,” said Willard.

“You sure seem to know a lot about this stupid shit,” said Bernard.

“I’ve had a lot of spare time during the day,” said Willard. “So have you.”

They both let out a long rolling chuckle.

“Yeah,” said Bernard, “I guess the two of us share a strong dislike of going to work, don’t we?”

“Nobody likes going to work.”

“But not too many hate it and avoid it as strongly as we do. The two of us work harder at avoiding work than anybody I know.”

“That is a true statement,” said Willard.

But it seems to me that once you begin a gesture it’s fatal not to go through with it. 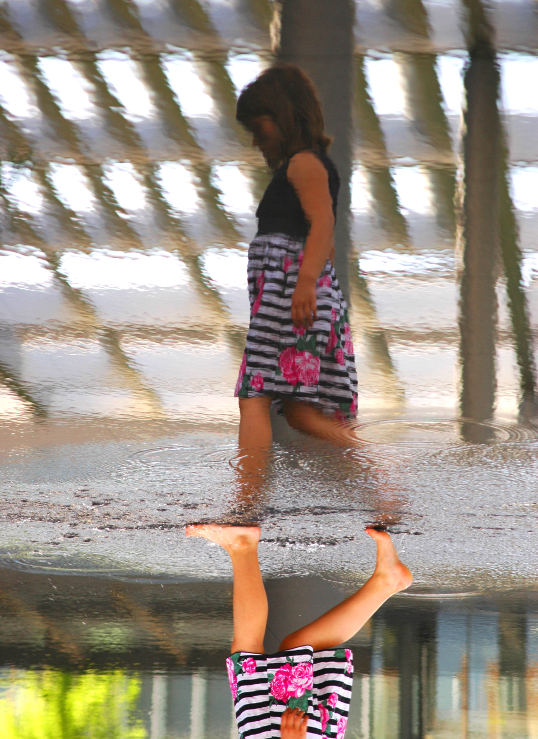 Kids love the reflecting pool. The water is less than a quarter inch deep.

As I committed the other day I am doing Nanowrimo – the National Novel Writing Month this November – writing a 50,000 word (small) novel in a month. Not necessary a good novel, or even a readable novel, but one of 50K words.

I have fallen behind, missed a couple days (too tired when I came home from work – fell dead asleep) and wrote too little on a couple days. But I had a good day today (a little over 3,000 words) and more importantly, have worked out a nice way to work.

I’ll do a blog entry on my writing machine and explain it in detal – but in essence is is a Raspberry Pi microcomputer mounted on the back of an old monitor, hooked up with a wireless keyboard and mouse. I run a program called Focuswriter set up to look like the old Wordperfect 5.1 – you know, that sharp white text on a blue background. It’s a distraction free full-screen experience, but I do have a bar on the bottom of the screen that gives me my constant word count and the percentage of the way to 1.667. This makes it surprisingly easy to crank out the words and get to the daily goal. We’ll see how it works combating the exhaustion of the workday (and I do have to work late several days this week).

Today I hammered out some bits of backstory and filler for a few hundred words. Then, looking for something that I could string out for at least a couple thousand, I looked in one of my books of writing prompts, The 3 A.M. Epiphany Almost immediately I came across a hint that suggested borrowing from a trusted source. The one in particular suggested taking a favorite story and rewriting it, giving it your own voice and changing what you want. I immediately thought of what might be my favorite of all time, A&P by John Updike (read the story here).

I hammered out my version – changing it from three girls to two (characters already in my story), from an A&P to an IGA, and told it from the girl’s point of view. It’s odd… I didn’t re-read the story (to try and make it my own) and haven’t looked at it in years, have forgotten many details, but made the bag-boy named Sam – in the story it’s Sammy. The name must have been stuck in my memory.

So, did I cheat by stealing from Updike? I don’t think so – it’s more of an homage.

Snippet of what I wrote:

Teresa knelt beside Beth’s chair and squirted the oil on to her back. She spread it out and rubbed it in until it disappeared into Beth’s skin.

“I’m thirsty,” Beth said in a luxurious voice, enjoying the afternoon, the sun, and, though she would never admit it, the feel of Teresa’s smooth hands sliding oily across her skin. She closed her eyes and thought of Sam and how his long, tight, sinewy body felt against hers, even her back, while they were in the pool at night. She was seized with a sudden desire to see him, in the daylight, and for him to see her, like this.

“I’ll go get some iced water, refill the pitcher.”

“I don’t want water, not only water. I want some more of that drink we had earlier.”

“My mom still has at least five bottles of champagne in the cupboard, leftover from my sister’s wedding,” said Beth.

“But…” said Teresa, before Beth cut her off.

“Oh?” said Beth. She sounded like she already knew they were out of orange juice.

“We could just drink the champagne.”

“No, I want some orange juice,” said Beth, “It wouldn’t be the same, it’s so hot today, champagne alone wouldn’t be refreshing enough.”

“Oh, where could we? I guess I could run down to the IGA and get some orange juice,” said Teresa.