A while back (Saturday February 4th to be exact) I was waiting to get on the McKinney Avenue Trolley down by the Dallas Museum of Art. Glancing over at the folks waiting in line to board, I noticed that some of them were wearing odd items of clothing – at a glance, at a distance, at first… they seemed to be some sort of colorful flowing robe. My first idea was that they had come from the Crow Museum of Asian Art (which was having some festivities that day) and were wearing some cheap imitation Asian costume of some kind.

Riding down McKinney Avenue in the Trolley, I started to notice other folks wearing these robes. Now, though I could see them a bit better and realized what they were. These people were wearing Snuggies.

A whole group of Women of a Certain Age clambered aboard wearing matching tiger-striped Snuggies, cateye sunglasses, and silver tiaras (sorry, I was so gobsmacked by the whole entourage I forgot to bring out my camera). I asked them what was up and they said it was the third annual Dallas Snuggie Pub Crawl.

All along the route I saw folks all snuggified – though a lot were cheating – they were simply wearing their bathrobes backward. I know this is alright… the rules say:

This is a Snuggie Pub Crawl even so a Snuggie of some kind is REQUIRED but you can also wear:

I’m sorry, but I think these rules are too lax… I don’t think robes or Forever Lazy should count. I go out in those all the time.

We chugged along through Uptown and began to pass the bars where the pub crawlers were congregating. It looked like a blast. It was tough to get decent photographs – the trolley was packed and moving fast and I had to shoot through bits of glass.

So, I assume there will be a fourth annual Dallas Snuggie Pub Crawl in or around February next year. I’ve made a note in my planner – it’s the only thing I have marked for 2013 so far.

I’ll have to buy a Snuggie, though. I am not going to go out there in a backwards robe.

The Snuggie People boarding the trolley 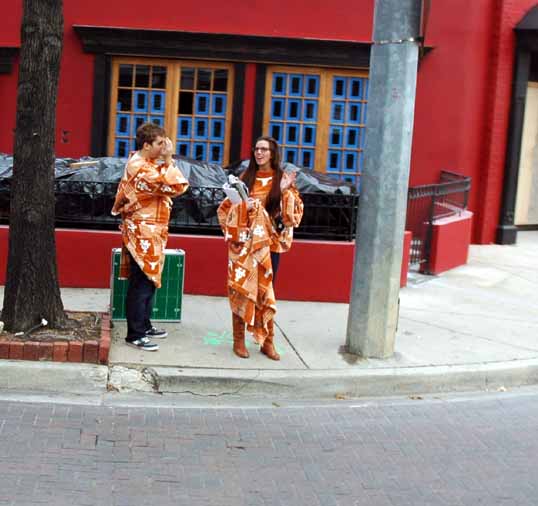 OK, this is Texas, so I guess the burnt orange Snuggies are all right, but what is that big green case he is lugging and why does she have such an armload of notes for a pub crawl?

When you and your insignificant other meet another couple in Uptown for drinks... is it more embarrassing to forget your Snuggies... or to remember them?

The bars were hoppin'. Are those Mandelbrot set Snuggies?

Ode to My Snuggie

I Sing the Body Snuggified