Emancipate yourselves from mental slavery;
None but ourselves can free our mind.
Wo! Have no fear for atomic energy,
‘Cause none of them-a can-a stop-a the time.
—-Bob Marley, Redemption Song

I always have a tickle in the back of my head for jerked chicken – the Jamaican dish.

The best jerk I had was in Key West – I remember it like it was yesterday. At least I remember the chicken – I have no idea what the name of the restaurant was. We were walking down Duval, back to our hotel, and it was late, very late… late even for Key West. But Candy and the kids were hungry so we ducked into the first restaurant we saw and sat down. The prices were a bit high for a late-night snack, but this was Key West and nothing comes cheap when it has to be hauled out to that island.

I looked at the menu and my eyes fell on the Jerked Chicken. I was a bit stunned when it arrived. It was an entire chicken – the whole thing. It had been expertly knifed (I have seen chefs do this on TV since) so that it was still whole, though boneless. It was flattened, dredged in jerk spices and then grilled expertly. I didn’t think I could eat the whole thing – but it was so delicious I couldn’t help but soldier through. I’m pretty sure that I didn’t sleep at all that night, but it was worth it. You never remember the pain as much as the pleasure.

When we actually went to Jamaica I wanted to get some authentic jerk but never pulled it off. We were only there for a day on a cruise. My idea was to somehow get to a jerk stand out on a highway somewhere – a place where the locals ate. But on a cruise shore excursion the time is short and the forces are allayed against you doing what you want to do.

The kids went up in the mountains to do a zipline thing and they were served some jerk chicken. The said that it was from a shack and the chickens were all running around a pen behind the place. It must have been great – I was so jealous.

Nick and I did have a little time and a little cash to spare before the ship sailed so we hired a cab to drive us into Montego Bay for some exploring on our own. I had planned on having the driver take us to a place that he knew about where we could get some food, but we spent all our money and most of our time in the city and barely made the boat before departure time.

I need to go back.

But in the meantime I discovered by reading a local blog that there was a new Jamaican Restaurant, The Jamaica Cabana that opened up only couple miles or so north of where we live. The blog made the place look great – so I made a point of trying to get up there.

It took longer than I wanted – but Nick and I had an evening free so we drove to the place for dinner. 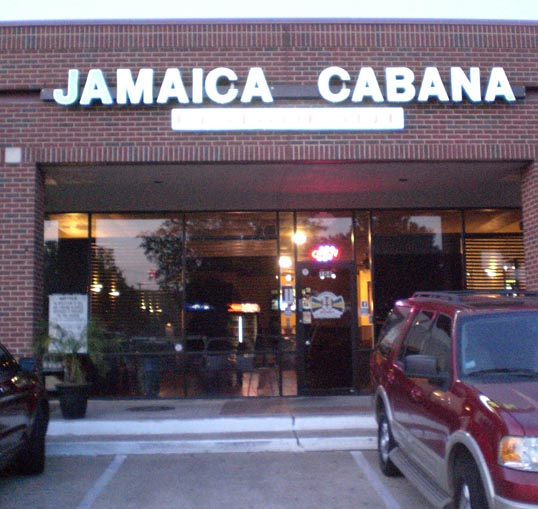 The parking lot was packed with people eating at a crowded local Tex-Mex emporium, while The Jamaica Cabana was mostly empty. I simply can’t understand the desire to gobble down mild cheddar cheese enchiladas covered in Hormel Chili perched between a puddle of bland rice and a pile of lard larded mashed pintos. Try something new, folks. Free your mind.

The menu was full of great looking stuff – but I couldn’t resist ordering the Jerk Chicken.

The chicken came with vegetables and plantains – I love plantains. One the side were what the menu described as “rice with peas” – though it was actually rice and beans. 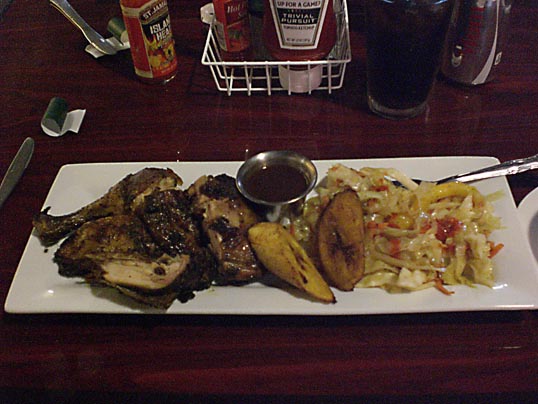 The food was fabulous and the owner very friendly. There were two bottles of very hot Jamaican sauce on the table – be careful, they are of the “delayed reaction” heat. Cool for me, if dinner doesn’t make the top of my head sweat, it isn’t spicy enough.

Now I have to go back and explore the rest of that menu….