But then Pointsman laughs the well-known laugh that’s done him yeoman service in a profession where too often it’s hedge or hang. “I’m always being told to take animals.” He means that years ago a colleague – gone now – told him he’d be more human, warmer, if he kept a dog of his own, outside the lab. Pointsman tried – God knows he did – it was a springer spaniel named Gloucester, pleasant enough animal, he supposed, but the try lasted less than a month. What finally irritated him out of all tolerance was that the dog didn’t know how to reverse its behavior. It could open doors to the rain and the spring insects, but not close them … knock over garbage, vomit on the floor, but not clean it up – how could anyone live with such a creature?

Isaak as a puppy, when we first picked him a year ago. 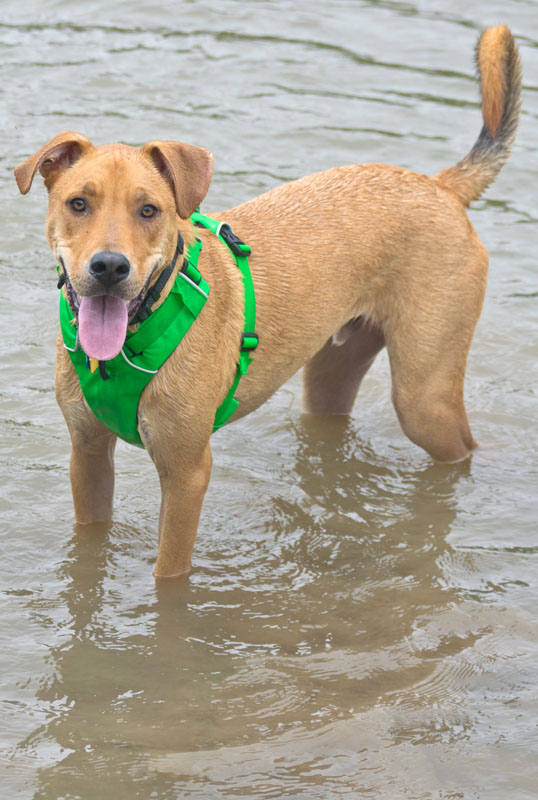 Isaak in the pond at NorthBark Park, Dallas, Texas

We have had Isaak, our dog, our rescue, for a year now. We don’t know exactly how old he is, but he was a young puppy when he came to us, so he is a bit over a year old. He’s pretty much as big as he’s going to get, but still has a lot of puppy spirit, for good and bad, in him. Other than excitement over tennis balls and the squirrels in our backyard trees that taunt him – he’s a well behaved and relatively calm dog.

We also have my son’s black lab with us – he and Isaak get along great. It isn’t unusual for us to have other people’s dogs too – kept as a favor for friends while they are on vacation or foster dogs (especially ones that need some socializing) or people pay us to watch their pooches.

The other day, we had another black lab mix staying, a little smaller than my son’s dog. So we had three… if not big, then good-sized dogs at the house.

I was having some trouble sleeping, and it was work the next day, so I was laying in bed, awake, trying to relax and get some rest before having to go back into the breach the next morning. A little after midnight… the guest dog wasn’t too comfortable with the doggie door, so Candy got up and let the three of them out the back door.

I’m not sure why she did this, but as the dogs ran by she reached out and flipped on the light switch for the back yard (I mean… the dogs can pee in the dark, can’t they?) and there, right in the middle of the yard, illuminated by a circle of spotlights, sat a rabbit.

The dogs went nuts – all three bolted for the bunny – and the rabbit made a mistake. The rabbit ran to the east side of the house, where the fence runs along the wall, a few feet away, until it ends near the front. The rabbit hit that dead end and had nowhere to go but to turn around. The three dogs were on him.

Our dog, Isaak, like most dogs rescued from the Dallas pound, is a pit bull mix. He doesn’t really look like a pit (he has long legs and a long snout) but is, according to his DNA scan, one quarter American Staffordshire Terrier – which is a polite term for Pit Bull. The poor rabbit didn’t have a chance. He was dead in a few seconds.

Candy, of course, went crazy. You see, to her the dogs are like people. They live in the house, most of the time, eat the food you give them, and chase tennis balls around. But right under that domesticated surface is a wild animal… and seeing a big fat rabbit standing there right in the middle of their territory, the back yard, is enough to bring that wild animal boiling out in a split second.

I jumped out of bed, chased the dogs back inside and, with more than a little trepidation walked around to the side of the house (at this time, I didn’t know what had happened); I only knew that the dogs had run down something. There was the rabbit, a big one, freshly dead with a big hunk missing from its side.

Isaak was walking around, coughing.

“We need to take him to the emergency room,” Candy said.

“Naw, he’ll be alright, though you’d better keep an eye on him, he’ll probably yakk up a big ball of rabbit fur any minute,” I said.

So it fell to me to go out and pick up the poor dead rabbit and throw him over the fence. We live on a creek lot so I went around and took the body down by the water, so the coyotes will have a snack sometime later that night.

I feel bad about the bunny, but not too bad. There are hundreds of rabbits along that creek after all. I wonder why the rabbit ventured into our yard. Surely they have some survival instincts and our yard smells of dog as much as any – it’s like the rabbit tried to sneak into a kennel.

I didn’t get much sleep – Candy and my son’s dog were freaked out by the whole thing. Isaak was just excited.

He’s a city domesticated pit bull mix – this was probably the high point of his entire life.