It is the end of 1982, and I am 38 years old. One day, at noon, I notice that my bike is steering itself. Later, I am sitting on the bay, which is today occupied by the Memorial Garden, facing the Rio de la Plata. With me is Daniel Coifman, a psychotherapist friend who has spent a couple of seasons at the Esalen Institute of Big Sur, travelled several times to India and, to put it briefly, gone exploring the mysteries of consciousness. Our bicycles are leaning against each other.

I tell him that I can remember all the places that we have been: the Planetarium, the level crossing near the airport, the crossroads near the Fishermen’s Club. Also, the wind on my face, the water splashing the railings, the smell of food at the restaurants when he made a detour to avoid the two elderly people who were drinking maté… However, I do not remember the thoughts that I had. I was distracted. I didn’t know where I was. I only knew in that moment that “I am here”.

Daniel jumped up. “No, you were not distracted,” he says. “You were abstracted, but you were not absent. And believe it or not, it is exactly the opposite.”

A couple of weeks ago, during the time I was doing nothing but work – including going in through the weekends – I took a couple hours off and met Candy at a big fund-raiser garage sale put on by a large, local church. We arrived at the very end (will have to make a note to go early next year – to get the good stuff) and, even though everything was picked-through, they still had a lot of interesting items.

I was looking at a big, old-fashioned overstuffed office chair when the announcement came out, “Only two hours to go, everything is half-off the marked price.” I bought the chair, and found a thin Bluetooth keyboard mounted in an IPad case for, well, almost nothing. I don’t own an IPad, but the keyboard popped out of the case. I pulled up my phone and confirmed that it worked with the keyboard. So I bought it.

I am always looking for an inexpensive, light, small keyboard device that I can carry with me, especially something I can carry on my bicycle. It has to be small and light… and inexpensive, so I don’t have to stress out about losing it, getting it stolen, or breaking it in a crash.

Over the years, I’ve used an Alphasmart Neo Keyboard, a cheap Android Tablet with a folding keyboard, and, most recently, a repurposed Toshiba Netbook running Lubuntu Linux. 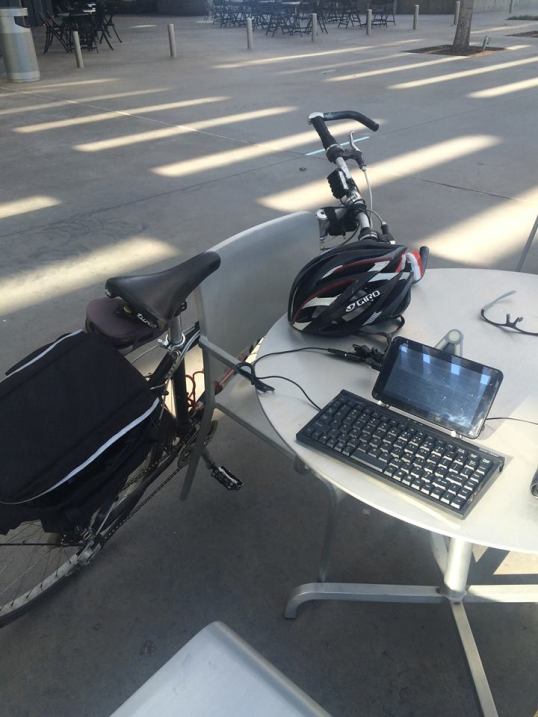 My android tablet and portable keyboard, I stopped my bike ride on the Bridge Park over the Trinity River to get some writing done. 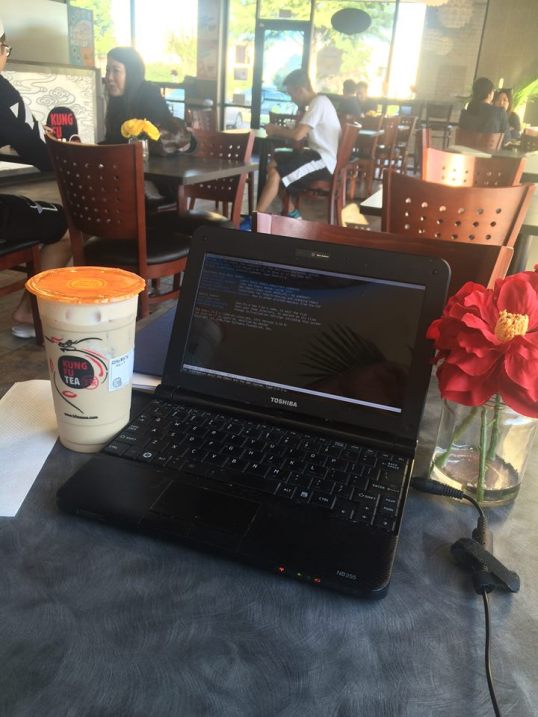 My Toshiba Netbook – rode my bike to a coffee shop.

The Netbook and the Tablet will still have their uses, but the Bluetooth keyboard is an extra lever of portable. I have to carry my phone anyway, so the keyboard only adds a few ounces. My big, old fingers don’t work very well hammering out a lot of text on a tiny phone screen. The keyboard makes it possible to write at least a few pages at a sitting.

The keyboard is perfect – light and small. It’s very well thought out. I am using it with the case removed from my phone so it can lean up on the slot that runs across the keyboard. 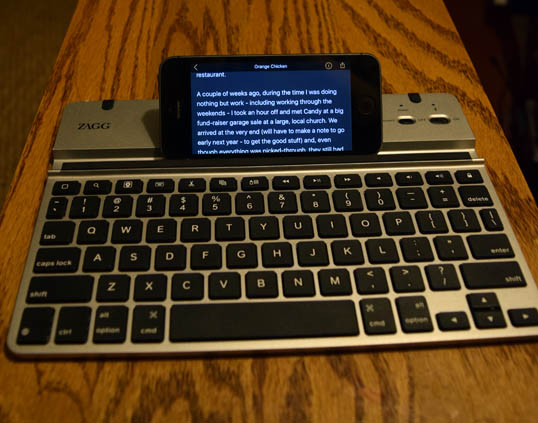 Bluetooth Keyboard and my phone.

I brought along a library book as well as my Kindle Paperwhite. The book is The Bicycle Effect – Cycling as Meditation by Juan Carlos Kreimer.

It’s a short book – less than two hundred pages – about the Zen aspects of riding a bicycle. I copied some money quotes from the book into my phone.

The book talks about destinationless riding – a Zen state of pedaling the streets without care for speed, time, distance, or direction. I am rarely able to pull that off – though I understand and crave the state. Today, I was able to leave home on my folder without care for a route or time. 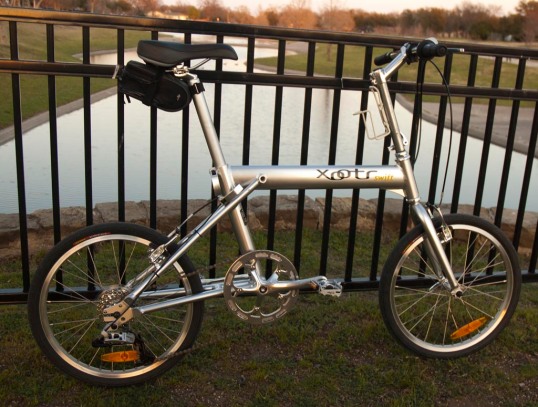 My folding bike, Stock Xootr Swift – I only added the seat bag and bottle cage
(click to enlarge)

After a few miles I did notice that I was hungry so I detoured to a favorite Americanized Chinese place in an old Dairy Queen not far from where I found myself. So now I can read a little, type a little, and eat a little.

Before long I’ll be bored and ready to pedal again. Where am I going to go?