In North Texas there are two slivers of time each year – one in the spring and one in the fall – where the weather is passable for outdoor activities. The rest of the time the air is cold and wet or – especially – deadly hot. Right now, in mid-October, is one of those salad times.

Last spring – April – Bike Friendly Oak Cliff sponsored a bicycle tour of taquerias in their part of the city. I went, wrote about it, and had a good time. Now, as part of their Cyclesomatic October, a celebration of the nice weather, they were sponsoring a second helping of tour de taqueria.

On Saturday I rode in a bike ride where we toured a number of breweries. Luckily, I was careful to not imbibe too much, yet stay hydrated, so I felt good enough to venture forth on two wheels and pedals for a second day in a row.

I had been having trouble riding lately and thought it was due to bad hay fever or the ravages of age, but this morning I did some routine maintenance on my road bike and discovered a simple fault I should have noticed (the front tire off-center and rubbing on the fork) and didn’t. I fixed it, adjusted and lubricated everything and was set to go. It made all the difference.

However, the maintenance work took up a couple hours and set me, as usual, behind schedule, so instead of taking the train to Oak Cliff I loaded up my car and drove down. One nice thing about driving with a bike is that you don’t have to park close – which helped out in Bishop Arts on a nice Sunday Afternoon.

The tour started out at The Wild Detectives – one of my favorite places in the world. It’s a combination bookstore, coffee house, and craft beer dispensary – what can be better than that? An establishment dedicated to reading material, roasted Arabica beans, and fresh suds on tap… I’m glad it’s a long way from where I live or I would be there all the time.

The Taco ride starts at The Wild Detectives in the Bishop Arts District.

Last time, the taco tour had five stops and a huge crowd. This go-round we only had three taquerias scheduled and a more manageable group – and I was happy for this.

Our first stop was El Taxqueño Taqueria at 207 W. Suffolk Ave – a nice restaurant with indoor seating and a patio. It’s right off Interstate 35 going south of the city – pretty handy. The owners were very welcoming and bike-friendly – I’ll definitely be back. 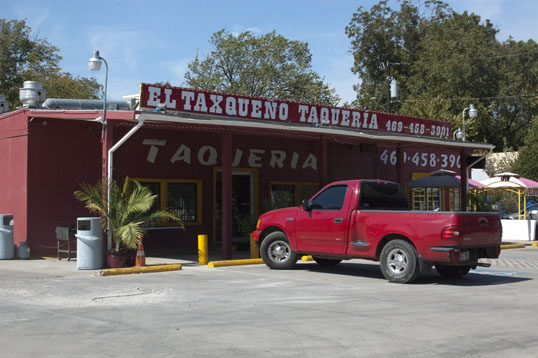 Then we headed west to Los Torres Taqueria at Clarandon and Edgefield. It’s a popular spot that has won best Taco Joint from D Magazine the last two years. It’s reputation is well deserved.

After Los Torres we headed north on a long downhill run on Edgefield until we crossed Interstate 30, then turned East to the rapidly developing West Dallas neighborhood off the Margaret Hunt Hill Bridge.

We stopped at La Gaviota Taqueria off the Interstate next to the huge postal service station there. I had never seen this place or known it was there, but it too was worth the effort to find and ride there. 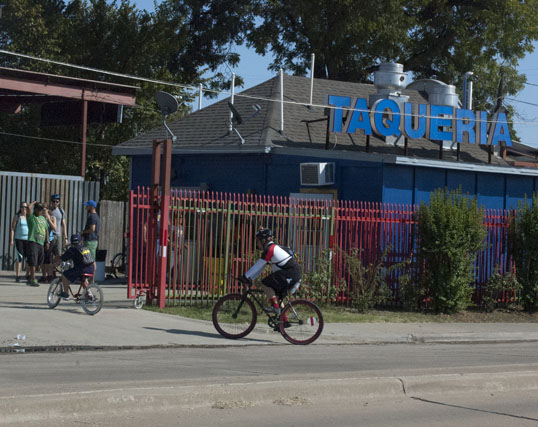 Now it was time to head back to The Wild Detectives and we had to earn back the downhill coasting. There are some steep heart-wrenching hills in Kessler Park, and we earned our daily tacos fighting up them.

A great time. Next week is another bike ride in in Oak Cliff – the Stevie Ray Vaughn Memorial Ride. Be there or be square.