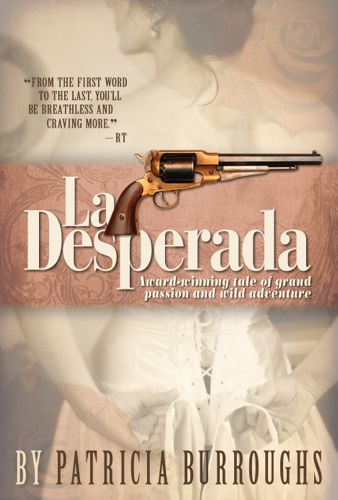 A few weeks ago I read a book that I ordinarily would not have read. This isn’t surprising, I’m not the target audience for this genre of fiction. I volunteered to read and review the new book by the teacher of a fiction class I took a few years ago, Patricia (Pooks) Burroughs. It’s a historical romance novel called La Desperada.

I didn’t want to put this up until the book was available – you can buy the ebook here. Go ahead, get it… you know you want to. I guarantee that this is the sort of thing you will like if you like this sort of thing.

This is the second romance novel I’ve read. The first was a random thin paperback Harlequin I picked up maybe thirty years ago and read out of sheer curiosity. Don’t ask the title, it’s long lost in my memory, along with the plot, characters, theme… or anything at all about the book except my visceral reaction to it. I remember that I read it in a couple of hours, although I’m not a particularly fast reader. I was able to crank through it so quickly because, First – I had the feeling I knew what the next sentence, paragraph, scene, chapter, all of it – was going to be. And I was always right. Second, I could read it fast because there was nothing there.

I did not become a fan of the genre after that first taste.

So now I am faced with La Desperada and writing a review of a book in a genre that I simply don’t read. Luckily, La Desperada is a much, much better book that that old Harlequin. It is a Romance, but there is much more going on between the pages, and it is written with a lot more ambition, excitement, and skill.

I went to school in Lawrence, Kansas. On days when the weather was nice, I used to walk from my dorm across Iowa Street into an ancient cemetery for a nice quiet place to sit outside and study. Sometimes I would even lean against an old tombstone with a textbook in my lap. Over time, I read most of the stones – they were all victims of Quantrill’s raid – where in a prelude to the civil war a band of Missouri based outlaws came across and burned Lawrence, slaughtering a good many of the residents.

I’m familiar with the history and passion of those days of violence and banditry and was glad to read that the prologue of La Desperada was set in Clay County, Missouri and that the heart of the conflict was born from the evil that spread across the land in those days.

Then the real story begins in West Texas – the town of Cavendish in 1881. Civilization had a tenuous hold on that wild land. There was still a place for men like Clayton Dougherty – men representing the law though they were at best barely on the right side of it – and too often, on the wrong. The uneasy, unstable, and ultimately cataclysmic triangle of Clayton, his intelligent and virtuous but scarred brother Joel, and Joel’s wife Elizabeth is thrown into violence and death when an outlaw, Boone Coulter shows up.

Once the story gets going, Boone and Elizabeth are on the run together, trying to escape their doom fleeing through the rugged desert and mountains of far West Texas and the untamed frontier towns of New Mexico.

I’ve driven North from Van Horn, Texas, along the valley east of the Sierra Diablo and felt the silent menace of those ragged cliffs and heat blasted salt flats. It looks wild and dangerous, and is so, even from a minivan. I’ve hiked up McKittrick Canyon in the Guadalupe Mountains (which must be the location of Boone’s hidden cabin hideout) and seen the magical beauty that a little water and shade can create in the high desert. My favorite aspect of La Desperada is the effort, imagination, and attention to detail that Patricia injects into the romance to pay homage to the setting and the landscape. West Texas, for good and bad, becomes another character in the story, and that is a very good thing.

That is the skill and effort that elevates the story above the run-of-the-mill romance. There is a real story here, real danger, real complexity. The romantic storyline is intact and moves as expected, but beyond that there is plenty of meat to sink your teeth into.

My only complaint with the book was the sex scenes. They arrive periodically and predictably and I found myself simply skipping these sections. This is not due to any prudishness on my part – I’m up for a little titillation without any qualms. I simply found the sex scenes in La Desperada clichéd and, I’m afraid, simply unexciting. I don’t know if that is a requirement of the genre (Bodice Ripping in the Old West) or not. At any rate, jumping over a page now and then didn’t damage the story at all – so it was all good.

When you are writing about someone else’s work, it is usually a bad idea to opine about what you would like to see done differently. You should write about what the book is, not what it is not. In this case, however, I want to give my opinion; I can’t resist. There is a secondary character that works to move the story forward – he has a doomed relationship with the the outlaw’s sister – his name is Miguél Obregón. I found this flawed, dangerous, evil, yet honorable in his own way character to be the most interesting thing in the book. I would love to read a book written about the love story between him and the sister from his point of view.

That would be something.

Review from Journey of a Bookseller