I liked to lie like that; a sleeping man is not molested, and meanwhile one can dream and think. But I could not dream, my heart was beating uneasily, and M.’s words, “Je haïs ces brigands!” were echoing in my ears.

The Wild Detectives in the Bishop Arts District. 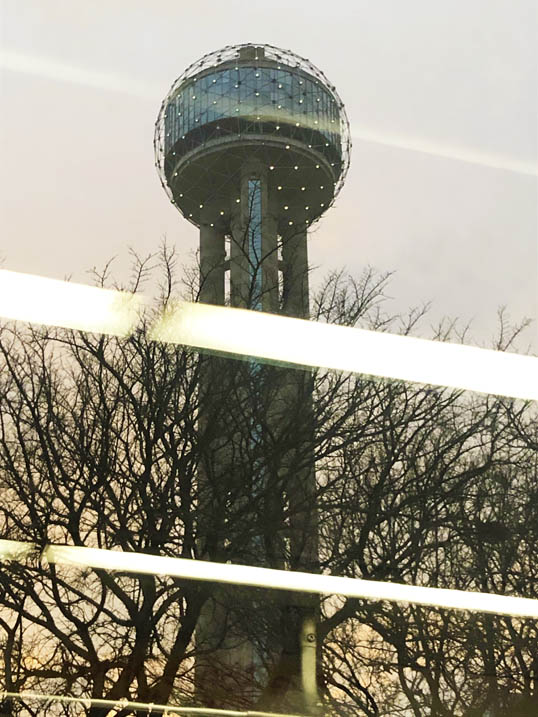 Reunion Tower, taken from inside the Dallas Streetcar. On my way to Bishop Arts for a discussion of Gravity’s Rainbow.

Signs at one end (downtown) of the Dallas Streetcar

Starting in January of this year, every Wednesday after work I took the DART train downtown, then rode the Streetcar to the Bishop Arts district – arriving at the bookstore The Wild Detectives. I was part of a group called the DRBC (Difficult Reading Book Club) and were slogging our way through Gravity’s Rainbow by Thomas Pynchon. It was a ton of fun, and when we finished up in the summer, it was announced that the next Difficult Book was going to be a trilogy by Virginia Woolf. I thought hard about it (even bought the books) but at the end decided that I didn’t want to give up the time to criss-cross the city… plus I had my own long/difficult reading project to complete (which I’m still working on after well over a year).

Today, though, I received an email outlining the next DRBC book – The Brothers Karamazov by Fyodor Dostoevsky. In theory, I read that book in college, but have no memory of it (at the time I was mixing literature and writing studies with Physical Chemistry classes – and the combination almost broke me) and suspect I might have made too liberal use of the study guides. But now, I want to read it, and read it in a diverse group, and maybe get a bit more out of it.

This will start up in January… sometime. In the meantime I thought I’d do some research on the deeper meaning of Dostoevsky’s work (without reading any of The Brothers Karamazov before it’s time) and maybe brushing up on some of his shorter works.

Thus, the short story of the day:

The Peasant Marey, by Fyodor Dostoevsky

available along with a number of Dostoevsky short stories at Project Gutenberg.

Here’s an audio version, if you prefer:

This is a (on the surface) simple story of a man in a Siberian Russian prison reminiscing about a slight incident from his childhood. There is a lot there beneath the surface, however. Worth the read.

One response to “Short Story of the Day, The Peasant Marey, by Fyodor Dostoevsky”